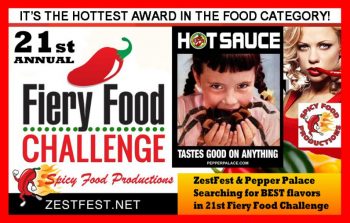 DALLAS – Dec. 10, 2016 – PRLog — As an industry leader, Pepper Palace is interested in mentoring smaller companies and encouraging their participation in ZestFest and the Fiery Food Challenge as a way to grow their business and promote the fiery food industry. The Fiery Food Challenge is a featured event at the annual spicy food show, ZestFest, produced by Spicy Food Productions, LLC.  Each year a panel of expert judges comes to ZestFest in search of the best products in the spicy food category.  Last year’s 20th Anniversary Edition of the Fiery Food Challenge was dominated by the products entered by Pepper Palace.  This year Pepper Palace has decided to hold off from entering to allow new and developing artisan companies an opportunity for increased exposure and the chance to win the prestigious Golden Chile award.

Pepper Palace was founded by Craig and Tanya Migawa in 1989 as a kiosk in a Central Wisconsin Mall and soon expanded to include two inline retail locations. After successfully operating in Wisconsin for eight years, a family trip inspired a move south to Gatlinburg, Tennessee. Pepper Palace opened their first Gatlinburg location in 1997 in a small storefront on the outskirts of town. Several moves were made to better, larger locations until finally reaching its current location in 1999, a 3000 square foot spot in a prominent Gatlinburg Mall. This was, and continues to be, the largest spicy themed specialty retail location in the world. Pepper Palace entered the online arena in that same year by launching pepperpalace.com.

Pepper Palace began expansion efforts by introducing an innovative private label program in 2006 and by opening a distribution center and corporate office in 2007. Pepper Palace’s second retail location was opened in 2008 in Myrtle Beach, South Carolina. Expansion continued with openings in Saint Augustine, Florida in 2009 and a second Gatlinburg location and a Branson, Missouri location in 2011. Growth accelerated in 2012 with openings in New Orleans, Chicago, Charleston, Panama City Beach, Sarasota, The Mall of America and the first venture onto foreign soil with the opening of a location on the Canadian side of Niagara Falls.

In the midst of this expansion, Pepper Palace branched out by opening King of Fire Sauce Manufacturer/Distributor in 2010 to meet the development and distribution needs of other companies. King of Fire has continued to manufacture & supply accounts both large and small.

It is Pepper Palace’s hope that ZestFest and the Fiery Food Challenge will help the company identify new brands to work with and promote as they work to expand their catalog of category winning products.   The company operates over 30 retail locations in the US and Canada and plans expansion into the West, Northeast and Midwestern US and Central Canada. International expansion is on the horizon as well. Pepper Palace is a privately held corporation that has won hundreds of National Awards for product, marketing and flavor. Pepper Palace prides itself on exceptional customer service and professionalism, but feels that maintaining this should be a joy rather than a chore.

Pepper Palace invites aspiring brands in the fiery food industry to showcase their products at ZestFest and in the Fiery Food Challenge.  ZestFest has proven to be a highly effective vehicle in building brand awareness and sales.  Trade buyers and purchasing agents for a range of businesses look to events like ZestFest to find the best products available to meet their customer’s needs.  To learn more about ZestFest visit https://zestfest.leadpages.co/zestfest-2017/.  To learn more about Pepper Palace visit www.PepperPalace.com.