You may actually like them, tolerate them or plain hate them. Do you think that there’s an overhyped group of spicy condiments that boggles the mind why throngs of consumers rave about but that you just don’t get? Yup, me too. Below I present to you what I believe are the most overrated hot sauces in the market today.

Do a Google search for Huy Fong Food’s Sriracha Sauce and you’ll be deluged with dozens of results pages containing gushing accolades from food fans on forums, blog comment pages and review sites. The people love this Thai-style pepper sauce.

As much as I tried, I just couldn’t get into this stuff. This one an instance where a sauce had a peculiar attribute I just couldn’t put my finger on. Perhaps it was too much salt and garlic, but Sriracha had an off-putting dark and bitter horseradish-like flavor, especially in the aftertaste.

ABC Sambal Extra Pedas Extra Hot Chili Sauce is an Asian style pepper sauce I would recommend in place of Sriracha. There is no nasty horseradish taste and is smoother and mixes better with rice and noodles. 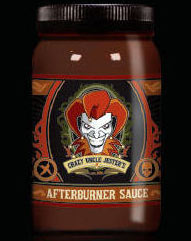 I want to preface this by stating I’m an enormous fan of Jeffery Stevenson and his company, Crazy Uncle Jester’s. I may not have fallen in love with everything released under that label, but I can’t get enough of their Blazing Hot Mustard and Brush Fire BBQ sauce, and CUJ’s Jamaican Hellfire and Select Reserve are solid condiments. All in all, Crazy Uncle Jester’s knows know to whip up some very unorthodox and spicy products and still have them retain a great taste and far-reaching usability.

But then there’s the little case of Crazy Uncle Jester’s Afterburner Chocolate Sauce. If you would listen to all the hype I’ve heard and read you would figure that it would be impossible not to go ga-ga over this product. It’s been lauded by my fellow chileheads Joe Levinson and Jonathan Passow on The Hot Zone Online and Chilebrown on Peppers and More. Reviewer Al “Buddah” Goldenberg awarded Afterburner his Product of the Year for 2009. It was an Every Day with Rachael Ray Magazine’s Big Bite: Hot Sauce Award Winner, a 2010 Golden Chile Award Winner, a 2009 Scovie Award Winner, and a Seriouseats.com’s Editors Choice award winner.

What about me? Well, at the rave recommendations by Buddah and others at last year’s Weekend of Fire show, I bought a couple of jars. I had even received an additional test jar from Jeff Stevenson himself; Afterburner and other CUJ products were distributed to a few bloggers at the show for review.

When I got home, I was raring to get some Afterburner on ice cream for what I had hoped was a delicious sweet and spicy treat. I adore the combination of sweet and spicy hot – I think at some point in the future that dual concept is primed to explode in the industry and break out into the mainstream. Anyway, I opened the jar and saw what looked like was brown, runny paint, with an almost oily film covering them. As any smart hot sauce fan should know, it’s always good to shake the bottle or jar before using any spicy liquid food product. I gave it a long, violent shakage, reopened the jar, gave it a few stirs and sniffed it. It simply had a bizarre, chemical-like aroma. Not the typical “hey this food has gone bad so let’s throw it away” smell but a bitter aroma that was not very appetizing.

I proceeded to taste a spoonful of it. I noticed some chocolate flavor, but it compared to a watered-down Hershey’s syrup, only not as sweet. And then the bitter chemical flavor kicked in. The off-putting taste wasn’t nearly as bad as some pepper extracts I’ve had, but it still stuck out like a sore thumb enough to make this unappealing.

Thinking maybe it was a bad jar, I grabbed the Afterburner given to me at the Weekend of Fire show (at the time these freebie review products were still boxed up separately). This newer jar produced the same results – the weird, chemical flavor and odor. Am I truly an oddball for not liking this stuff?

Instead of this, I would recommend that you crave some really good, spicy chocolate syrup, check out Cow Girl Chocolate’s Chocolate Dessert Sauce. It has a “to die for” rich, thick, creamy, fudge brownie-like taste and texture with an awesome, natural heat. It makes Afterburner Chocolate Sauce taste like paint by comparison (sorry, Jeff, I’m just being honest).

Tabasco is such as easy target. They’re a large company with worldwide appeal and a long, hallowed history, and it’s safe to assume that any criticism I give them won’t hurt them one iota. Therefore I could lob a number of verbal missiles at them with little chance of repercussion.

I do happen to respect McIllhenny Co. for all they’ve done for the hot sauce industry throughout the years, and without them where would we be? But their base product, Tabasco® brand Pepper Sauce, simply is a weak sauce that relies too much on vinegar and salt for its flavor instead of the wonderful taste of aged red chile tabasco peppers. It does this so much that myself and other critics have dubbed it “pepper-colored vinegar”.

Want a good alternative to Tabasco that’s available just about anywhere in America? Try regular Cholula hot sauce – it has a richer chile pepper presence, a bit more of a kick, and still is mild enough for a lot of spice fans.

Dave Hirschkop is one of the nicest guys in the spicy foods industry and received a well-deserved “fire-o-neer” status when he released his extract-laden Dave’s Insanity Sauce upon unsuspecting masses at the 1993 National Fiery Foods Show. Back then, no one had mass-marketed a hot sauce made with extract, so Insanity was truly the hottest stuff on the planet. It helped launched a movement and pushed sauce manufacturers to create spicier hot sauces, using both natural means and with extract.

Nowadays literally hundreds of condiments are hotter, but Dave’s Insanity Sauce has achieved legendary status and still remains a bestseller to this day thanks to its once record-breaking and industry-wide “yardstick by which all hot sauces are measured” reputation.

But is the sauce any good? In my opinion, not really. The bitter, nasty flavor extract is too dominating amongst the blend of tomato sauce, onions, peppers and vinegar. Dave has produced much more savory sauces in the years since Insanity’s debut and they have a more balanced mixture of natural pepper heat and extract burn. Try some of Dave’s other elixirs instead, such as Hurtin Habanero or Roasted Garlic, or go with an extract-based sauce made by CaJohn’s instead for blistering heat.

What Do You Think?

What’s your take on what the most overrated sauces are? Any that I’ve failed to mention? After reading my choices, do you think I’m full of it? Give me your thoughts in the comments section below…

The Most Overrated Hot Sauces in the World
Tagged on: sriracha