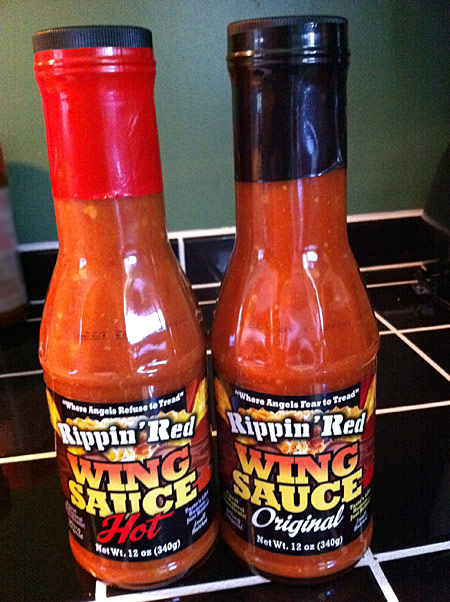 The labels may proclaim that these are “Where Angels Fear to Tread”, but I was more than willing to traverse the lands of Rippin’ Red Original and Hot Wing Sauces in search for buffalo wing nirvana. Produced by Rizzotti Foods LLC, the Rippin’ Red line was created in hopes to break out in an overpopulated wing sauce market. Is it capable of doing the job? Read on to see…

Aroma:
4 out of 5. Each one has great, appetizing smell. Neither are not too strong and have a lovely cayenne and vinegar scent.

Texture and Appearance:
4.5 out of 5. Often you’ll find wing sauces that are too thin, where they have minimal clingability and the eater simply can’t keep enough of it to taste on the wing. Others are thick; and while a like sauces in general with a dense body, it’s too easy to overcoat wings to the point where you’re wearing more of the sauce than eating it.

The Rippin’ Red Wings Sauces’ consistency are nestled somewhere in the perfect and happy medium. Each have a smooth, mid-level pourability. With a beautiful red/orange color (the Hot version appearing less red than the Original), the look of these two products score high marks in my book.

Taste Straight Up:
4 out of 5. Brilliant mix of peppery warmth and vinegar twang. But those attributes aren’t the only components of a great wing sauce, and luckily Rippin’ Red also offers tones of richness and creaminess.

After the initial taste, I ended up liking the Hot version just a tad more, and not just for the extra rung or two up the ladder of heat. Everything seemed to fall into place more competently than in did in the Original. Hot was “this close” to earning a 4.5 rating, if only it had a dose more zestiness.

Taste on Wings:
4.0 out of 5. Succulent taste and nearly optimal stickiness. While this doesn’t quite reach the Mount Olympus of wing sauces, this is one of the better chicken coaters I’ve eaten in the past few years. With either grilled or fried chicken, Rippin’ Red soars. 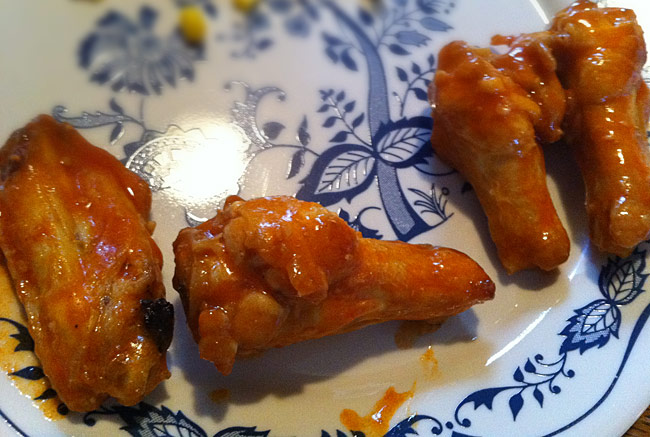 Heat:
Hot: 1.5 out of 5; Original: 1 out of 5. Even if you don’t care for much burn in your wings, the Hot version won’t knock your socks off. Original is for children and wimps only.

Label:
3.5 out of 5. Bright colors, bold fonts with heavy stroking, and nice to look at. This would look appealing on a supermarket shelf or display rack.

Because of the lack of heat and slightly less zingy flavor, I would probably skip the Original and head straight for the Hot if I would see these on a store shelf. Don’t get me wrong; both are very good and worth your hot sauce dollar.

To learn more about Rippin’ Red Wings Sauces or to place an order online, jump on over to http://www.rippinred.com.