Warning: Use of undefined constant add_shortcode - assumed 'add_shortcode' (this will throw an Error in a future version of PHP) in /home/scottrob/public_html/wp-content/plugins/stray-quotes/stray_quotes.php on line 615
 Hot Sauce Hall of Fame Inaugural Class Inductees! – Scott Roberts Hot Sauce, BBQ and Spicy Food Blog 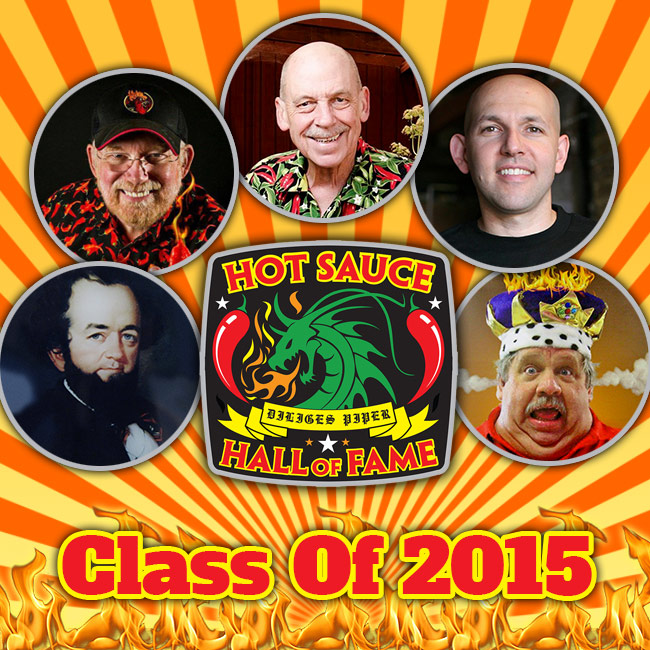 The fiery foods industry is rife with talented and influential individuals, so selecting ten original nominees was no easy feat, let alone choose five folks to be inducted in the first year. The votes has been tabulated, and the announcement will be made today at the 3rd Annual New York City Hot Sauce Festival… here are the first five inductees to the Hot Sauce Hall of Fame Class of 2015!

During the induction ceremony (today, Saturday April 25th), the first class will be awarded fiery red jackets and some super sweet Hall of Fame rings!

Here are the winners…

Edmund McIlhenny – Created Tabasco Pepper Sauce in the 1860s and is the best-selling hot sauce ever.

John “CaJohn” Hard – Owner of CaJohn’s Fiery Foods. The “Godfather” of the modern artisan hot sauce industry. Started in 1996 and has garnered over 650 regional, national and international awards, the most of any sauce manufacturer on earth.

Dave DeWitt – “The Pope of Peppers”. Author of dozens of books, and maybe the original “chilehead”. Started the National Fiery Foods & BBQ Show over 27 years ago and set the standard for The Big Hot Sauce Show.

Dave Hirschkop – Owner of Dave’s Gourmet and creator of Dave’s Insanity Sauce, which was one of the, if not the first, extract hot sauce. Was one of the first to create “limited edition sauces” and was instrumental in the collector hot sauce craze.

Chip Hearn – Co-Owner of one of the original hot sauce websites, Peppers.com, as well as one of the first, and one of the largest national zesty distributors, Peppers.com. Inventor of the Bloody Mary Smorgasbord in 1978. Originated the “risqué” hot sauce genre at the 1989 National Fiery Foods Show.