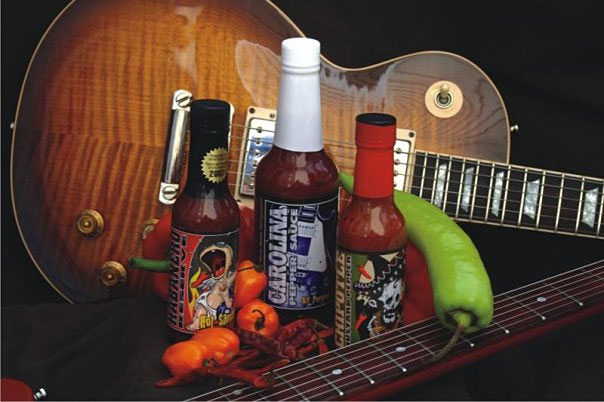 My friend and sauce maker Steve Burnham (whom I interviewed about four years ago) has sold his Blues BBQ line to Jack Moore of Blowin’ Smoke BBQ Sauce.

It’s of high interest to me, because the products under the Blues BBQ brand – the Habenero Reserve Sauce, the Carolina Pepper Sauce and the Chipolte Pepper Mustard Sauce – are all true 4-star and 5-star condiments, and every soul who is serious about flavor with a little bit of heat needs to try these fantastic sauces. Steve has assured me that this sale is a profitable one and his sauces will be in good hands, and that the three aforementioned sauces will still be just as (if not more) available as they were before, and recognizable because of the unique label graphics, but will probably have a new name.

But what about the new owner, Jack Moore? Below is a brief history penned by Jack himself.

I wish both Steve and Jack huge success in their future endeavors.

My wife and I began making this sauce over 25 years ago as a basting sauce for country-style
ribs cut off of a bone-in pork loin. Within an hour of completing the grilling process, we baste the ribs with our special sauce, allowing the sauce to caramelize. Remove the ribs, pack
them in a foil-lined cooler, pour extra sauce over them, seal the foil and cooler, and allow the
meat to steam for at least an hour (we’ve actually left them untouched for up to 8 hours, and
they’re still piping hot!).

Following a trip to a college baseball tournament at Mississippi State University in 2003, we
were inspired to expand our grilling efforts to a larger scale. An oil-tank smoker gave us more grill capacity, and we began to experiment with our barbeque sauce on more varieties of
meat, including chicken halves, baby back ribs, shrimp, and Boston butts. Our family, friends,
and neighbors also enjoyed cooking with our sauce, and we started to produce batches for
private sale in a two gallon pot. We received a lot of encouragement to manufacture the
sauce commercially, but two full-time careers were all that we could manage at the time.

In April 2008, I retired from full-time employment and started the process of marketing and
producing Blowin’ Smoke BBQ sauce. The name originates from family and friends who
suggested the name “Blowin’ Smoke”. I disagreed with the name because while the sauce is
sweet and spicy; it is not hot. They explained that they believed that I was just “blowin’
smoke” with my talk of manufacturing the sauce. I tried to find a better name, but I was out-
voted, so Blowin’ Smoke it became. A customized logo by a local Rowan County artist,
Betty Sedberry, completed the packaging. Additionally, the sauce qualifies as a “Goodness
Grows in North Carolina” product as its principal ingredients originate in North Carolina. Our sauce is also gluten-free for those consumers who are concerned about gluten in their diet.

In 2010, we added a second product to the Blowin’ Smoke line, an Eastern North Carolina
style vinegar-based sauce that is excellent for marinating meats or as a “dipping” sauce. This
version can also be used to make a tangy BBQ slaw that is a favorite of many of our local
friends and clients. The original Blowin’ Smoke sauce can also be combined with the
dipping sauce to create a unique BBQ chicken in the oven, crock pot, or on the grill.

Friends and colleagues have shared their own special recipes and uses with us, and those
recipes are shared on our website. We would love to add your favorite uses to our current
collection.

In 2012, I was invited to be a part of a new television show on the Travel Channel that shared
stories of folks like myself who had developed a reputation for preparing tasty BBQ, ribs, and
chicken using backyard grills and unique cooking techniques. The show, “All You Can Meat“, aired in August of 2012, and my segment showcased the preparation of baby-back ribs using the original Blowin’ Smoke BBQ sauce. On that day, I cooked a grill full of baby-backs for the
local little league team, Blowin’ Smoke Bombers, that we sponsor as part of our community
service to my hometown of Spencer. While the show had a limited number of segments, you
can still access the episodes online and see me in action.

As we approach the 2014 grilling season, we are adding a new product line to our Jack and
Gigi Enterprises collection: these products are from the original Blues BBQ sauce name and
include a Blues Habanero Reserve sauce, the Blues Carolina Pepper Sauce and the Blues
Chipotle Mustard Pepper sauce. These specialty condiment sauces are very popular with our
customers and can be used to enhance the flavor of your favorite appetizers and sandwiches.

Now “Blowin’ Smoke” products have become staples in many produce markets, butcher
shops, and specialty groceries in Piedmont, North Carolina. The Eastern style sauce has
grown in demand from several local restaurants who use it in large quantities.

Why don’t you try it in your home? We have friends in California, Colorado, New York,
Washington State, Virginia, Florida, and South Carolina who are fans of our versatile sauces.
We hope that you will use them to enhance your own favorite recipes and experiment on your grill. We hope that your family enjoys our “Blowin’ Smoke” BBQ sauces as much as we enjoy
providing them for you. Thanks for your business!