It’s all of our duties as chileheads to make each other aware of other chile pepper and hot sauce happenings around the globe, in the media as a whole and in social networking, but this one was unbeknownst to me up until a half hour ago.

I had received a game invite from someone on my Facebook friends list who isn’t even a chilehead. Now, I don’t even play games on Facebook – I never have and never will. Yet this one interests me, as it has a multiple of chile peppers as its main focus: Pepper Panic Saga. I know zilch about this particular app, but what Pepper Panic Saga has on it’s main Facebook app page for its description is this:

Pepper Puppy is just like every other dog, except for one thing – instead of bones, he loves peppers!

Help him travel through 70+ fun-filled levels in search of peppers to pop.

Match peppers of the same color to make them grow. When they grow big enough, they explode – and if you get a chain reaction, you get a Pepper Panic!

New from King – the makers of Candy Crush Saga – Pepper Panic is the hottest game on Facebook.

Here’s the link to the game: https://www.facebook.com/appcenter/pepperpanicsaga

Have any of you pepper devotees tried this game out? Is there anything notable in it as it pertains to the world of chile peppers? Any “tips of the hat” when it comes to specific chile varieties? Or is it all just a bunch of multi-colored pepper shapes on the screen that might as well be other objects like balloons or jewels?

Let me know in the comments below! 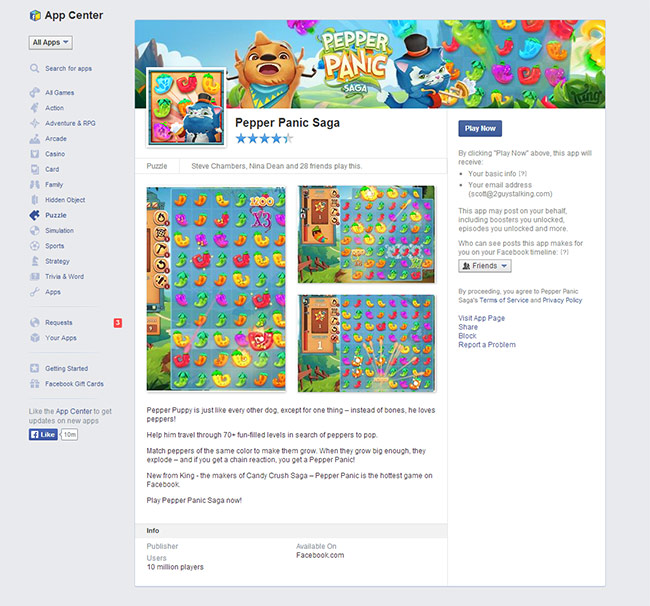 What’s Your Take on This? The Pepper Panic Saga Game on Facebook