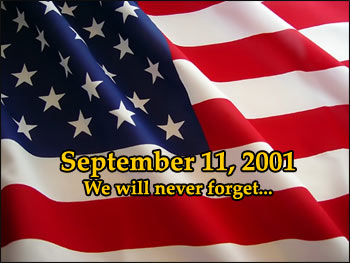 Everyone above the age of 13 remembers where they were 10 years ago. 9/11 has become the “where were you when Kennedy was shot?” of our generation. Here’s my story…

I was working for Skywalker Communications, and it was an lovely, early Indian Summer day just like another. While doing whatever junior webmaster duties I was performing at the time, a middle-aged, female co-worker raced from her cubicle across the way from me and bounded into the cube alcove area in which my boss and I toiled. She had asked, “Did you hear? A plane just crashed into a skyscraper!”

“Really? Where?” I responded.

She replied with, “in New York City. It was one of the World Trade towers”.

I was already a complete internet junkie, meaning that I got the bulk of my news and info from online sources as opposed to TV or cable. All I was thinking that some drunk, suicidal or incompetent pilot of a small commuter plane or even a little rinky-dink Cessna didn’t know what he was doing and slammed it into the side of a building. I typed in cnn.com to see if I could get the details.

Frustrated, I went to stltoday.com, which was the St. Louis Post-Dispatch newspaper’s website. It, too, was being bombarded with heavy traffic and would not load for me. I then attempted suntimes.com, the Chicago paper’s online news outlet. Little by little, the homepage began to load up with a molasses-like crawl but with missing style sheets and graphics due to the massive amount of taxing their web servers were taking. I think because of their enormous failure to stay online that day in 2001, news websites realized that they had to start taking the internet seriously and throw far more resources into keeping their web servers up and operational at all times. This “world wide web” thing was truly no longer a fad, and now it had grown into an indispensable part of the public’s lives in 2001.

Then it dawned on me – I worked for a satellite company! Skywalker Communications was a distributor of DirecTV (and later DISH Network) products, so I hightailed it to the back of the building (my cubicle area was located towards the front) where there was a wall of TVs tuned to various channels.

I got back there and a small crowd of employees was glued to the video images of one of the twin towers billowing smoke. “Incredible,” I thought to myself, “the plane must have been HUGE to produce that kind of damage!” With the bank of TV monitors tuned to CNN, Fox News and MSNBC, I noticed something moving in the sky on one of the screens – a second plane ramming into the other tower.

A chill ran down my spine followed by the rest of my body going numb. I knew this was more than just a mere accident. Of course, by then it was becoming more and more clear that these were the acts of terrorists. The subsequent images of the Pentagon attack, the hijacking of United Flight 93 and the address to the nation by President Bush only confirmed that suspicion.

At one point in the morning, someone made the joke, “where’s Bruce Willis when you need him?” but it seemed like a thousand action heroes like Die Hard‘s John McClane would not have made a difference, as something had intangibly changed. We felt vulnerable. There was this whole attitude of “how can this be happening to us?!” and made me feel unsafe as an American probably the first time since the height of the cold war and the nuclear scare that stretched well into the 1980s.

There at Skywalker Communications, many of us were transfixed upon the TVs, witnessing the twin towers fall and hearing updates on the attacks along with false alarms (one news report had the State Department Building being evacuated because of a bomb scare). There was this sense of the whole world turning upside-down. I know this was a day that changed everything.

I don’t remember what time I sauntered back to my desk. I tried accessing news websites for updates, but had minimal luck. My boss had turned on an old-fashioned AM/FM radio tuned to KMOX St. Louis to get whatever bits of information we were able to get confirmed as factual.

Probably after lunchtime, that in my state of confusion (let’s face it – everyone felt this way), I knew deep down what really mattered, and that was my loved ones. My boys Cory and Kevin were 2 years and 11 months old respectively, and were at the babysitters when me and my then-wife Kathy were at our separate jobs. Kathy had come off her second suicide attempt in two years, and I had nearly divorced her in early 2001 (I finally did in November 2010). At this time we were still in a period of semi-reconciliation and my feelings for her were mixed.

But it was my sons who longed for. My heart was crying out to love them in this vulnerable state we now found ourselves on September 11, 2001. I called the babysitter to see how they were doing. The sitter answered that Cory and Kevin were doing well and that every parent was calling in (she watched several children in her home) just like I had done. This momentarily sated me but I still could not wait to get home to see them.

I honestly don’t think I got a single bit of work done the rest of the day at Skywalker. All I could think about was the day’s events and my two boys.

My whole attitude and outlook – as did that of the entire country – changed that day. On my main website at the time, VHTrading.com, I post these thoughts on the site’s message boards:

“Let me preface this by saying that we — the VH Trading community — are a global congregation. We’re made up of all nationalities, we’re all equals, and we’re all friends. But the vast majority of us are from the U.S., and this post is directed to you guys… Today’s events are absolutely unfathomable. I still can’t believe it happened. It’s all so surreal…never in my life have I been personally shaken so much about an act of terrorism, an act of war… Sad. I’m sure most of you feel the same way as I do. It’s shaken us to the very core of our national spirit. I’m sure that’s exactly what the terrorists wanted to do; disrupt the everyday lives of Americans and instill fear and dismay into our hearts. Let’s show them that this has not beaten us. If you have a flag, dig it out of your closet and display it on your house. Attach it to your cars. Show everyone that the American spirit is alive and well. Do something nice for somebody. Buy them lunch or dinner. Let someone ahead of you in line. Give someone a hand when they need it. Yeah, I know; sometimes people can normally be jerks. But if you’re nice to them, there’s a good chance they’ll return the favor to you (or someone else). As a nation we can unify ourselves if we show each other that depression and chaos hasn’t gotten the best of us; instead, show that hope and kindness will thrive in the aftermath. Many news pundits have commented on the situation, “the terrorists have already won. They achieved their objective.” I disagree. When we band together as a country in spirit, we can show the world (and especially the terrorists) that we can win. And we will win. Pray for those who may still be alive in the rubble. Pray the families that’ve lost a loved one one today. And fear not; we will get the motherfucker(s) behind this and bomb their asses back to the stone age.”

I still believe in many of those things I wrote ten years ago. The terrorist attacks did bring the country together in a way unseen since World War II. We were loving, friendly, patriotic, strong-willed, and in a strange way, one big family. Unfortunately, politicians and those who blindly follow political parties have made sure that they ripped that unity to shreds. I think that The United States of America is divided more now than ever. I’m afraid that if another terrorist attack happens again on our soil (God forbid) that we as a people may never be able to unify again like we did….