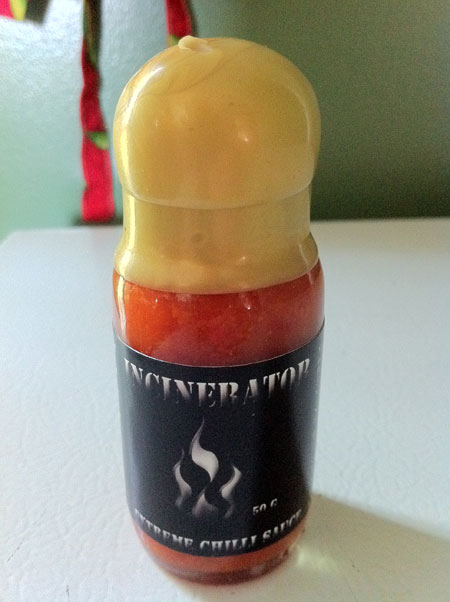 This particular sauce is the brainchild of Candice Burns of Wildfire Chilli from Australia. She submitted me her Heatseekers Chilli Smokey Jolokia Original Steak Sauce and blew mw away by the simple deliciousness and the heat it packed.

With Incinerator Extreme Sauce, she aims to create a sauce with the base flavor and heat deriving from the 7 pot chile pepper, one of the hottest in the world at between 800,000 and 1,200,000 SHU (hotter than a Bhut Jolokia/Ghost Chile and just under a Trinidad Scorpion Butch T), and make it even more insane by introducing the aforementioned pure capsaicin crystals. How was it done, you may be asking? Are there literal grains and flakes of capsaicin suspended in the sauce that can hit your tongue? Technically, not really.

The thing with capsaicin crystals is that they are hydrophobic. This means they cannot be dissolved fully and directly with water. So those brave souls who have tried a pure cap flake on their tongue (and therefore entered the “16 million club”) and relied on good ol’ saliva to break down the flakes aren’t getting the full effect in terms of heat. One of the things that can dissolve pure capsaicin crystals is high content alcohol. It should also be noted that a single, solitary a flake doesn’t use up much surface area on your tongue. While it can have a piercing needle feeling of fire, it doesn’t “spread” quite like lower-Scoville, more liquid amounts of capsaicin fluid can around your mouth.

So Candice Burns dissolved the capsaicin crystals in the vodka and then added to each bottle of sauce. Sure it’s a bit more diluted that way, but we’re still talking a potential multi-million SHU heat present in an already super-hot 7 pot chile sauce. Any way you slice it, there was going to be some pain with this!

It should be noted that while I’ve never tasted a product with these capsaicin crystals (diluted or otherwise), this is not the first of its kind to contain these. I know that ChilliPepper Pete’s Satan’s Sh*t has pure cap crystals among its ingredients.

Lastly, before I get to the details of actual review, I wanted to see if sauce went beyond mere novelty territory and might actually taste good! Since pure capsaicin does not have any nasty extract flavor, I was dying to know if this would indeed be able to have extract-level heat without all that yuckiness. I was pleasantly surprised – this is an excellent-tasting product!

Aroma:
4 out of 5. Very sweet, fruity and full of the trademark citrus tanginess of capsicum chinese. Nice!

Appearance and Texture:
4.5 out of 5. Smooth yet thick and almost pulpy like a reddish-orange applesauce. I poured some out on a plate and tilted the plate around in every direction to spread it out a bit. By doing this I was able to make out the individual components that made up the texture: 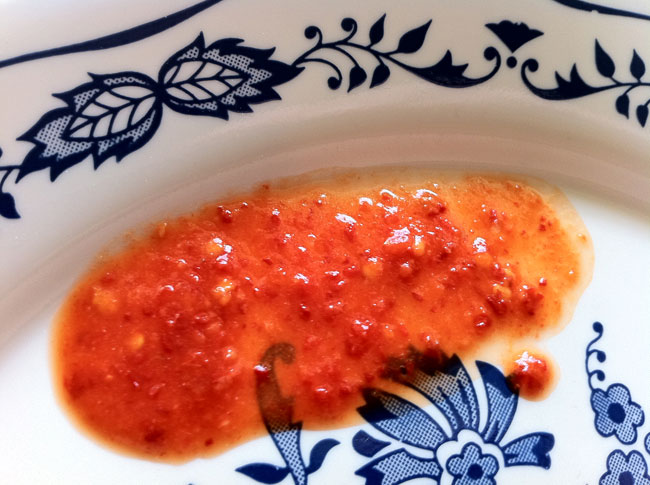 My first taste of this was a drop/glob on the back of the hand.

Wow! Incinerator Extreme Hot Sauce is amazingly delicious! First up was a powerful blast of fruit that wasn’t too sweet yet not too sour, either. Almost instantaneously the distinctive flavor of 7 Pot chile peppers wrapped itself around the pear and pineapple notes and coated it with incendiary love. Hints of vinegar keep a bit of needed tartness in the mix but after several seconds the 7 Pots dominated! I could not taste much ginger (it must have been more of a supporting player in this) and of course, vodka even by itself is for the most part tasteless.

Another aspect I LOVED about this stuff was that it had all the extract heat with NO nasty, bitter extract taste, as I mentioned in the introduction. Hallelujah! Since the pure capsaicin contains no taste, all of the flavor came courtesy of the beautiful 7 Pots and the other ingredients. 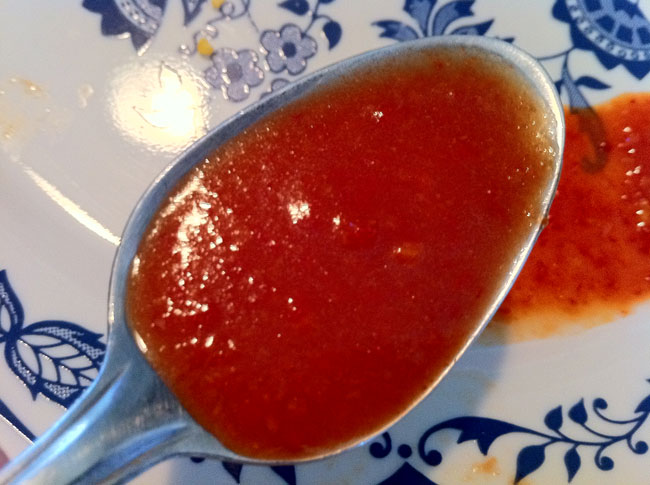 Next was the tablespoon test. If I had to get through trying this sauce out, I figured I might as well do it full throttle. I dunked out a heaping helping of Heatseekers Chilli Incinerator Extreme Hot Sauce and took the full amount in my mouth. I kept the sauce afloat around my gums and my tongue as long as I could, just to see if I could catch all the nuances of flavor before the fire went bombastically intense.

The heat grew much quicker than eating a typical 7 pot chile pepper would. With five to seven seconds it approached extreme levels and kept skyrocketing. Around 15 to 20 seconds in, I had to swallow the sauce. It was approaching becoming unbearable, with the burn getting hotter and hotter by the second. It finally plateaued at a level only attained by the most extreme extract sauces and perhaps a large, ultra-hot Trinidad Scorpion Butch T…simply ferocious in nature!

Strangely enough, the heat dissipated much quicker than eating a super-hot chile pepper would. Within 5 minutes, the smoke had cleared and the burn was well into my stomach. This is where the REAL fun began! My belly was having a rip-roaring time, not unlike cramping some of you might have experienced with certain extract sauces. The discomfort largely subsided after 45 minutes but then made me feel like I had to evacuate out the other end with great haste. Not to venture into “too much information” land, but I visited the bathroom two or three times later that afternoon and finally was successfully at, uh, “extracting” the burn!

Heat level: 10 out of 5. Simply one of the hottest things I’ve ever had in my mouth.

Taste on Food:
4.5 out of 5. Yes, believe it or not there is a real-world application for this and I wholeheartedly recommend hardcore chileheads try some of this in very carefully-measured, small amounts on food. 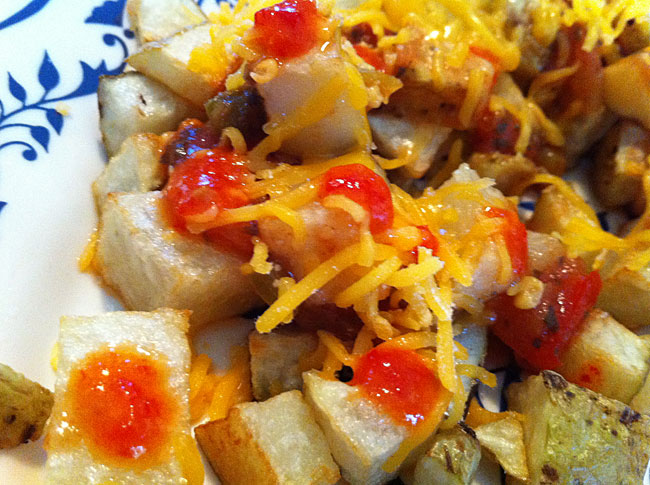 For my first test run I shook out several globs of Incinerator on a plateful of friend potatoes with shredded cheddar cheese and Gringo Valley Original 10 Pepper Salsa (one of my favorite brunch combos). Great heat and wonderful complimentation! Heatseekers Chilli Incinerator allowed the core flavors of this dish to “breathe” yet took it to remarkable levels with the zing, bite and extraordinary heat of the sauce. 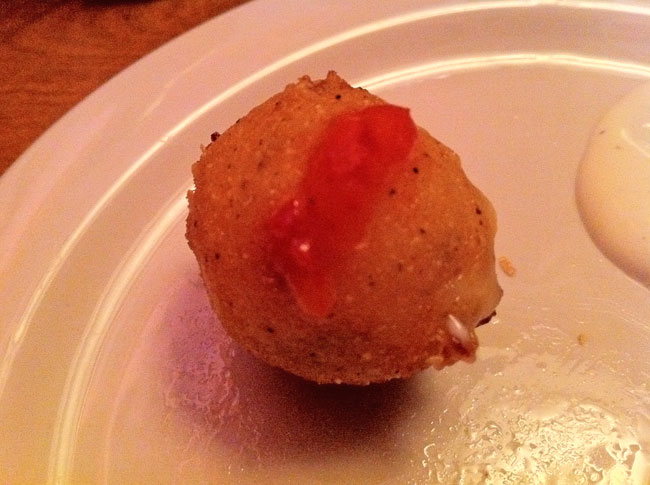 For a Sunday evening meal at Texas Roadhouse Steakhouse, I opted to get their Rattlesnake Bites (breaded balls of jack cheese and diced jalapenos) and give each one some Heatseekers Chilli Incinerator Extreme Chilli Sauce love. Marvelous fare here! The fire melded in such a heavenly manner with the smoothness of the soft, melted cheese that each bite of these were better than the next.

Label:
2.5 out of 5. From the waxy top, it certainly gives the appearance of a collectable. The label is serviceable but I think the text is a little hard to read with the white-to-black gradient on a black surface. 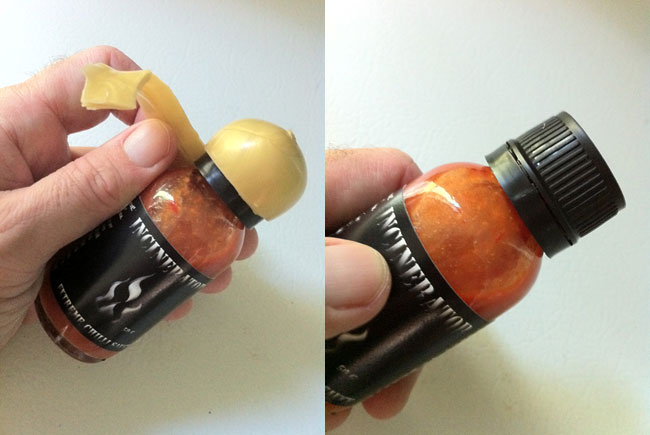 The flavor of Incinerator has nothing to do with it’s heat, just to make it clear. It’s got a full-bodied taste that really brings out the tones of the pepper along with just the right amount of fruitiness. The screaming, wacko, gonzo heat is merely an added bonus. Obviously because of the high Scoville levels this baby packs, it does not make for an ideal table sauce. Instead, when you want to kick your food up a couple of dozen notches, instead of reaching for that horrible-tasting extract paste, grab some of this.

Now comes the catch. Heatseekers Chilli Incinerator Extreme Chilli Hot Sauce runs for $39.95 AUD, which at the time of this writing converts to approximately $42.65 USD. Ouch. And that’s before overseas shipping from Australia is tacked on. With a price tag like that, it’s easy to consider this to be a novelty or a collector’s bottle. It’s a shame, because this ranks up there with one of the best tasting, multi-hundred-thousand-and-higher Scoville Heat Unit products out there.

There are a limited number of bottles available at the Wildfire Chilli website – a total of 60. So if you want in on one of the hottest and tastiest experiences you’ve ever had, order a bottle now.