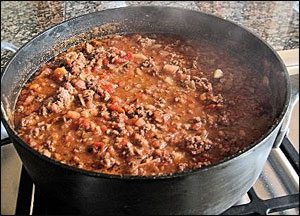 After James Beck of EatMoreHeat.com posted that an Illinois real estate agent won this year’s ICS World’s Championship Chili Cookoff, I scoured the interwebs for more details on the event. Of course, I scrounged up some info at the Official ICS Chili Cookoff site, but I also came upon a semi-related opinion piece featuring the Ten Commandments of Chili Cookoffs at the Wilmington Star News website. Although I didn’t necessarily agree with everything, I found it interesting nonetheless. Below is an excerpt:

Ten Commandments for a Chili Cookoff

The StarNews turned into a battleground today as 11 of our employees vied for the in-house chili king crown as a fundraiser for United Way. In addition to scraping up over $100, a few finer points in competitive chili cooking came to light. Obviously, chili is a subjective dish, all beef and peppers in Texas, cinnamon and pasta up in Cincinnati. That being said, the judges (other StarNews coworkers) overwhelmingly favored the classic bowl of red. So without further ado, here are my 10 Chili Cookoff Commandments.

1. Chili is, above all else, about beef and chilies. Skip the ground and cube up some chuck roast. Otherwise unremarkable chili can become a star with a nice chunk of meat, and chuck roast can often cost less than ground beef. Likewise on the chilies. Use a mixture, maybe a few fresh jalapeños, a canned chipotle or two and a half dozen or so dried anchos soaked and run through a blender. Leave the McCormick Chili Powder on the shelf. You can do a lot better on your own with a little instinct and intuition.

2. Thou shall not cooketh thine chili in a Crock-Pot. Crock-Pots are great things, but brown meat they cannot. Do it right in a heavy dutch oven, saute down those onions and garlic, get a nice color on the meat. Then Crock it to keep it hot.

3. Just because it’s called chili doesn’t mean ignore the rest of the spice rack. Get some cumin in there, some coriander. Play with the oregano, cinnamon, heck, try grinding a handful of coffee beans down to dust. Remember, heat and spice aren’t the same thing.

4. Chili is a patient chef’s dish. Don’t expect to toss dome ingredients into a pot , bring it to a boil and walk away with a prize. To make a pot of chili more than a sum of its parts requires a good long simmer.

5. Vegetarian chili. Just don’t do it. Not for a contest, anyway. They can be perfectly delicious and nutritious but unless they have their own category a veggie chili isn’t likely to be a contender.

6. Taste your chili constantly while cooking. If things are starting to burn on the bottom it will affect the whole pot. Keep those other spices in check and please, don’t let it get too sweet. If you just follow the recipe and toss it out there for the judges disappointment is likely to follow.

7. Corn. I like corn. Corn can be good in chili. But tough, chewy corn from a bag in the freezer is no fun. Corn is cheap this time of year, buy a few ears of the nice sweet white kind and cut it off. You (and the judges) will be thrilled with the results.

8. Canned tomato sauce is not for chili. Texans would argue tomatoes period are not for chili, but I suspect most judges will be anticipating a little tomato acidity. Canned sauce only adds an unnatural sweetness and gross texture. Stay away.

9. Season carefully. There’s a lot of good stuff going on in a pot of hearty, complex chili. Don’t mask it with a heavy dose of salt. Worse yet, see it all lay flat and lifeless at the bottom of a judges list by not adding enough. If this is confusing, see rule #6.

10. Most importantly, and flying in the face of the rest of this list, don’t be afraid to take risks. Some of my favorites of the day were pretty unconventional. One was loaded with smoky chorizo and cider vinegar for a distinct tang, another a visually striking stark white with chicken and pale beans. One of the better veggie options I’ve ever tried was packed with cauliflower and cheese. While judges will probably be looking for classic flavors, don’t be afraid to put your stamp on it.

So there it is. One chili fan’s opinion. Do with this as you will, but follow even a few of these rules and I’m pretty sure you can count on your bowl making a stronger showing at the next contest.

Ten Commandments for a Chili Cookoff