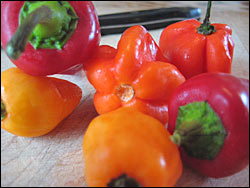 (NaturalNews) The late, famed herbalist Dr. John Christopher was nicknamed “Dr. Cayenne” because he was constantly recommending the healing powers of cayenne, the substance found in chile peppers that produces a sensation of heat. He especially advocated using it for cardiovascular health and even made the claim that doses of cayenne could stop heart attacks in progress. Now science has come up with proof cayenne does have a remarkable ability to help the heart. University of Cincinnati (UC) scientists have found that capsaicin, the main component of cayenne and other chile pepeprs, may literally stop a heart attack in its tracks when applied topically.

New research just published in the journal Circulation concludes that a common, over-the-counter pain salve containing capsaicin rubbed on the skin during a heart attack could serve as a cardiac-protectant – reducing or even preventing damage to the heart. The researchers found an amazing 85 percent reduction in cardiac cell death when capsaicin was used. This is the most powerful cardioprotective effect ever recorded, according to Keith Jones, PhD, a researcher in the UC department of pharmacology and cell biophysics.

Dr. Jones and his research team applied capsaicin to specific skin locations in mice that caused reactions in the nervous system. Specifically, sensory nerves in the skin were triggered to activate what the scientists call cellular “pro-survival” pathways in the heart. The result? The heart muscle was protected from injury.

The researchers also found that a tiny incision made in the abdomen of the lab rodents triggered an 81 percent reduction in the death of heart cells. “Both this and the capsaicin effect are shown to work through similar neurological mechanisms,” Dr. Jones explained. “This is a form of remote cardioprotection, using a skin stimulus that activates cardioprotection long before the blocked coronary artery is opened.”

Dr. Jones is currently working in collaboration with cardiologist Neal Weintraub, MD, director of UC’s cardiovascular diseases division, and other clinicians to test capsaicin’s heart protective abilities in people. “Topical capsaicin has no known serious adverse effects and could be easily applied in an ambulance or emergency room setting well in advance of coronary tissue death,” Dr. Jones said in a media statement. “If proven effective in humans, this therapy has the potential to reduce injury and/or death in the event of a coronary blockage, thereby reducing the extent and consequences of heart attack.”

The researchers think that by activating sensors in the nervous system through skin, a response to preserve and protect the heart is triggered. “This may be similar to the way certain acupuncture treatments work; there may be a neurological basis. In a broad sense, this work may provide a “Rosetta stone” for translating alternative medicine techniques – like acupuncture – to Western medicine. Perhaps we can understand the biological mechanisms of how alternative treatments may be successful for patients,” Dr. Jones stated.

Editor’s note: NaturalNews is opposed to the use of animals in medical experiments that expose them to harm. We present these findings in protest of the way in which they were acquired.

Capsaicin Could Stop a Heart Attack In Progress, Scientists Find