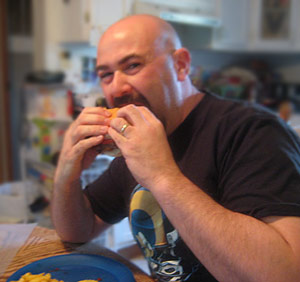 Being both a chilehead and a fan of the Travel Channel’s Man v. Food, I always take great interest when host Adam Richman attempts to tackle spicy food-related eating challenges. For some reason, his recent battle against a four chile pepper hamburger really piqued my interest. He’s previously taken on super hot wings and scorching Indian curry, but I guess what got me intrigued was the fact that this particular challenge could be duplicated at home with relative ease. Instead of trying to figure out a secret formula, mystery recipe, or unknown ingredients that were essential puzzle pieces in other Man v. Food-featured dishes, the Four Horsemen Burger was something somebody like me would have been able to get all the parts necessary for in-home trial.

Okay, let’s get some background on the “real” burger. The Four Horsemen is the ultimate sandwich offered by Chunky’s Burgers in San Antonio, Texas. The “four” in its name represent the four chile peppers present on the burger: jalapeno, serrano, habanero, and the ghost chile, better known as the bhut jolokia. Those supposedly “brave enough to eat it” must put on rubber gloves to avoid “spice burns” and are given 25 minutes on the clock to wolf down the entire thing. After taking the last bite, the challenger must wait an additional 5 minutes to let the pain from the peppers set in, and cannot wipe his or her face or drink or eat anything to alleviate the burning, such as milk or ice cream.

Here’s a quick video snapshot story of how the Four Horsemen Burger is shown the episode: 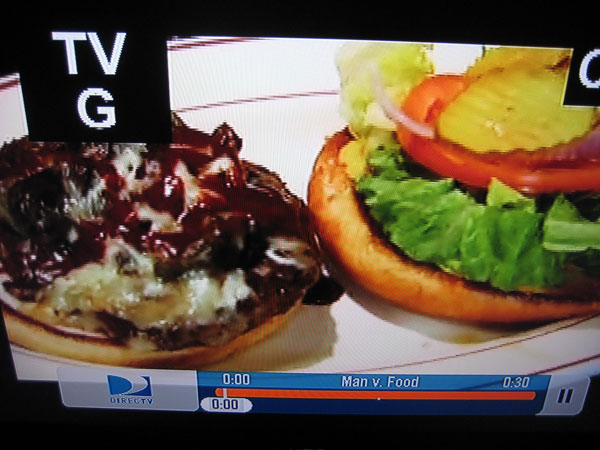 Above is the burger as presented on the show – with the beef patty side covered with chile peppers, melted cheese and a habanero sauce. 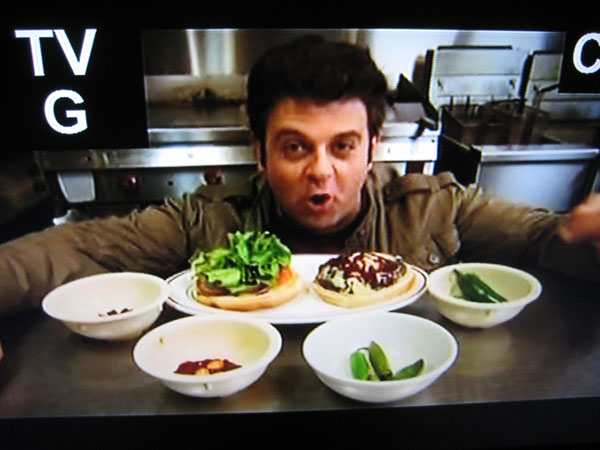 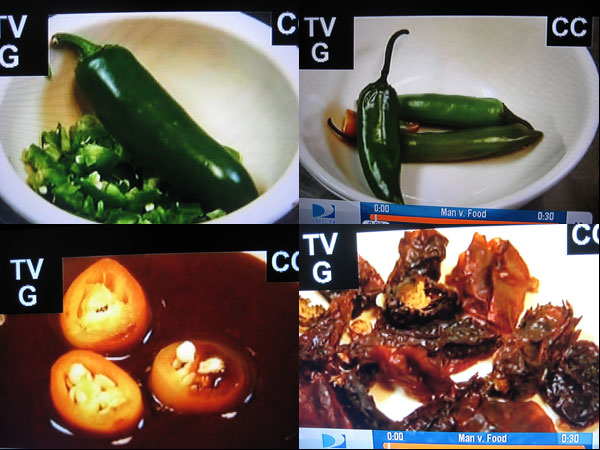 At this point I should mention that habanero peppers themselves are not on the Chunky’s-constructed burger, but a non-descript, unknown (kinda goes against what I said earlier, huh?) “hot habanero sauce” is employed instead. 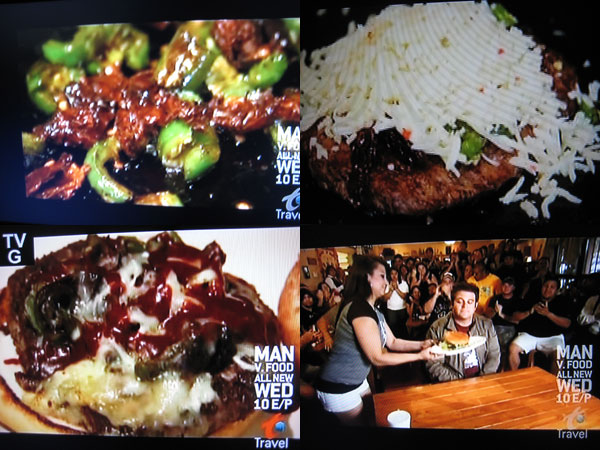 Clockwise from top-left: sauteing the peppers; topping the burger and chile peppers with generous amounts of shredded cheese; a brown habanero sauce poured over the melted cheese; presenting the finished beast to Adam.

Okay, let’s get to my own homemade concoction. 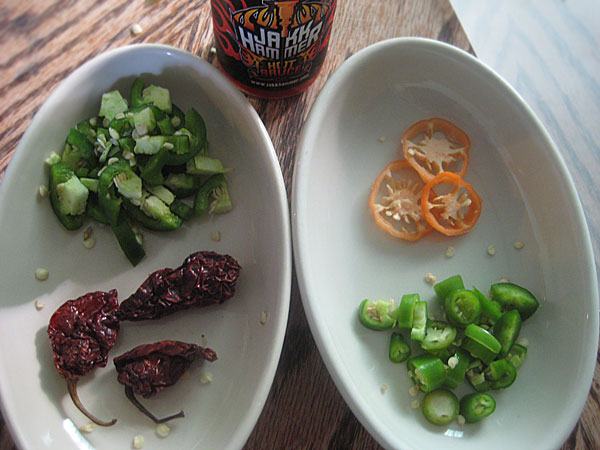 The peppers used match the Four Horsemen’s, and clockwise from top-left they are: two chopped jalapenos, three orange habanero rings (yeah, not used on the burger itself but shown floating in the sauce), 1 1/2 chopped serranos, and three dried bhut jolokias. Seeds, membranes and all were left in just as shown on the TV show.

The ghost chiles, or bhut jolokias, are the hottest chile peppers in the world according to the Guinness World Records and the New Mexico State University’s Chile Pepper Institute. Chile peppers’ heat is measured by the Scoville Scale, and jalapenos clock in anywhere from 2,500 to 8,000 Scoville Heat Units. Bhut jolokias can get as high as 1,000,000 SHU.

When they are dried and smoked, jolokias get a lovely brown, wrinkled texture, almost like a crunchy raisin. 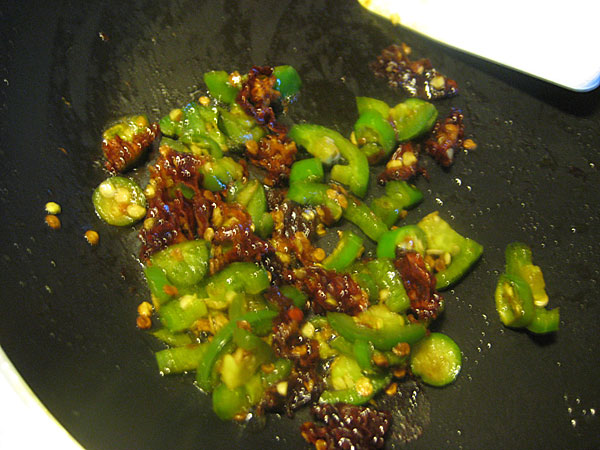 The jalapenos, serranos, and bhut jolokias being sauteed in a little butter. 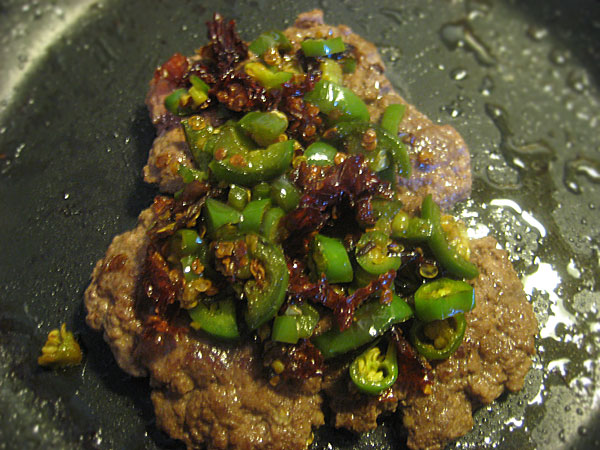 Chiles on the burger. 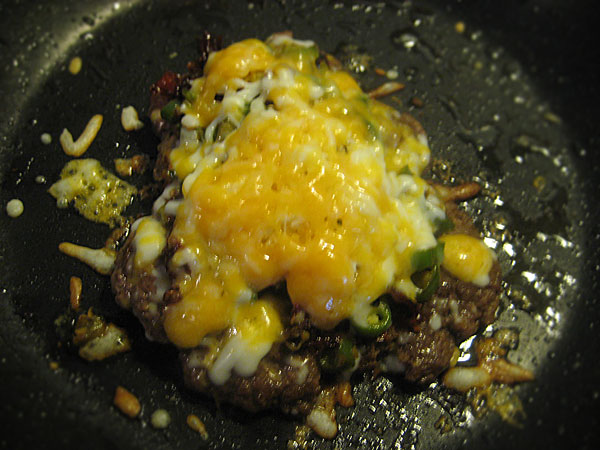 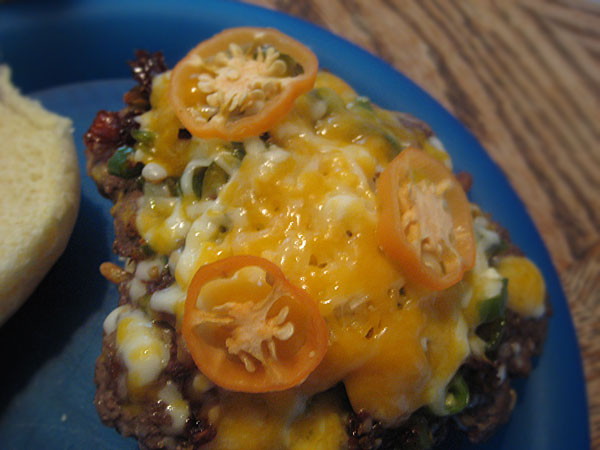 Those extra rings of orange habs I sliced earlier? While not on the original Four Horsemen Burger at Chunky’s, they were “cherries on the top” for me. 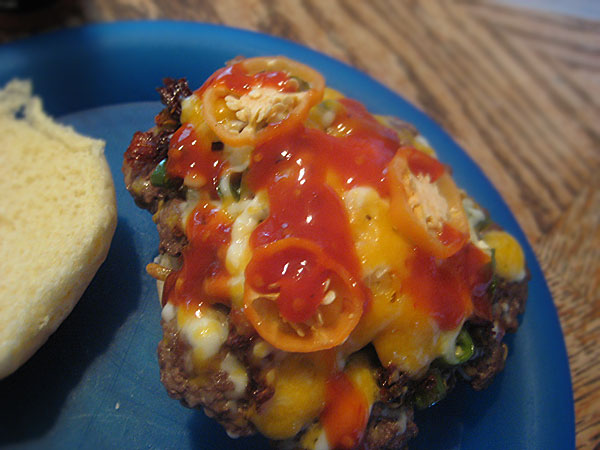 It was time to get down to business! I set up the same rules as Chunky’s has – a 25-minute time limit, with a 5-minute period afterwords with no milk or soothing ice cream. The Man v. Food episode was a little vague or whether or not ANY type of beverage is allowed at any point in the challenge. So to be on the safe side, I opted for having NO beverages at all, during the time I ate the burger AND during the five-minute wait.

Chunky’s makes you wear gloves while eating, but I wasn’t too worried about “spice burns” on my hands (LOL!), so I went without them. 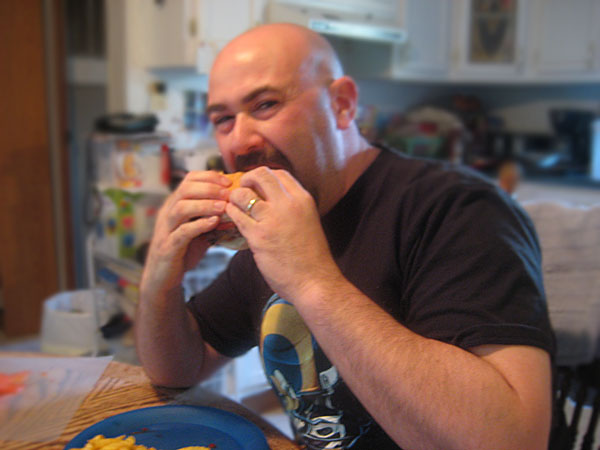 Here I am at around the third bite in.

If you saw Adam Richman’s performance on Man v. Food, the very first bite stopped him dead in his tracks (the video trailer containing that moment can be viewed here). Me, I didn’t really taste the extreme heat until approximately halfway through the burger, and most of that was only felt around the corners of my mouth. 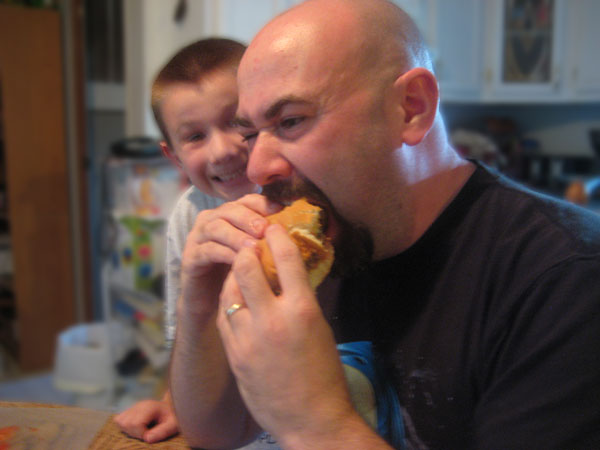 Here’s my oldest son looking on me as I try to look “tough”. Just wait ’till he’s older and I make him do this!

All talk of pepper burn and pain aside, I thought this was a great-tasting burger! There’s something about adding peppers that gives a cheeseburger – or a lot of other foods – a great deal of added complexity and dimension. I loved the four-punch flavor that the chiles provided.

When it it got close to finishing time, the heat was starting to build up nicely. My lips and corners of my mouth took the brunt of the burn, but my tongue started to feel the pain as well. And the endorphin rush was kicking in. God I love this! With my eyes starting to water a bit, I picked off every piece of pepper that fell on my plate, ate them, and then consumed my last bite of burger. The timer had 17:00 minutes left on it, so 8 minutes ain’t too shabby for a cheeseburger. Now my wife reset the timer for 5 minutes and I waited it out. 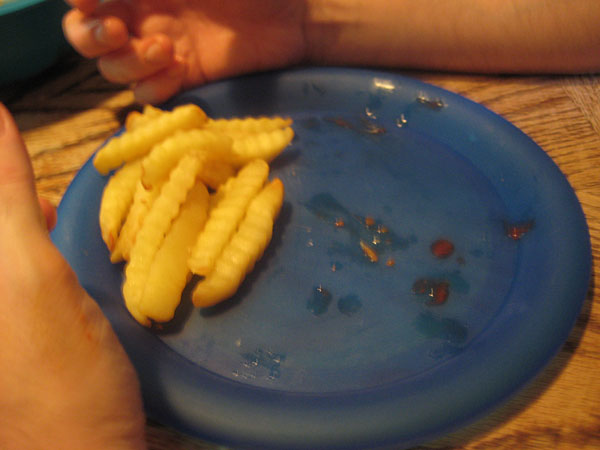 No drink, no wiping my face, no nothin’. And the crinkle-cut fries on my plate had to wait, too. 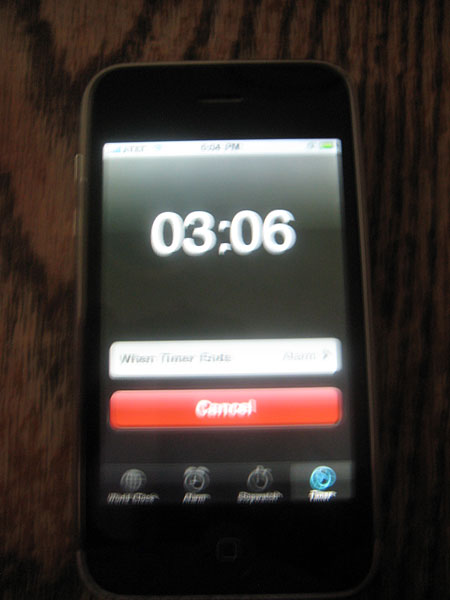 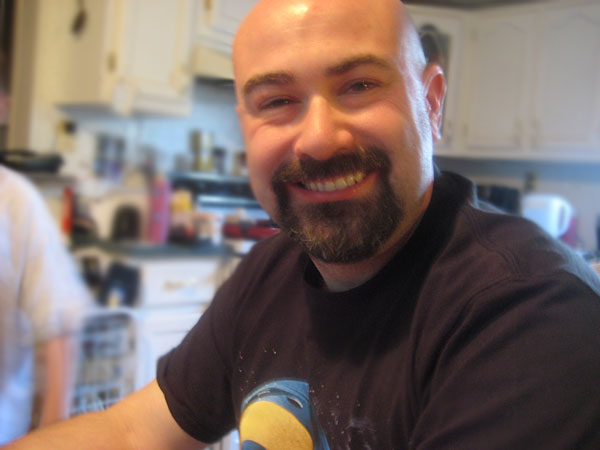 Here I am happy and fed, with a bit of red, teary eyes.

To be honest with you, as the wait went on, the fire in my mouth slightly cooled. From experience, the heat from certain peppers and sauces will remain lingering for 10 to 15 minutes and even continue to build up. Because of the quadruple onslaught in this burger, I didn’t know what to expect, but luckily the fire was dying.

Time was finally up, and the Four Horsemen proved to be no match for me. No beverage was necessary at this point. I proceeded to eat my French fries and only wanted to take a drink when my throat got dry from the fries.

Yeah, those last few sentences sounded a bit big-headed of me, admittedly. But I’m definitely not conceited and I don’t eat hot stuff to prove how “macho” I am. I couldn’t care less about trying to prove myself to people. I just did this for fun, but I might try this burger recipe from time to time ’cause it’s really tasty!

To find out more about the Travel Channel’s shows or to buy episodes, go to http://www.travelchannel.com