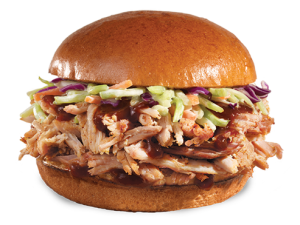 Our journey with taking a look at Wendy’s new BBQ Pulled Pork offerings began in late September of this year with their “BBQ4merica: Pulled Pork for the People” video. What can I say about it? It was an extremely clever and effectively ad campaign that, in today’s age where 98% of commercials personally do not appeal to me, actually drew me in, entertained me, made me laugh, and gave me a small glimmer of hope that another fast food franchise could perhaps pull off a decent barbecue sandwich (the previous one being the marginally-good ARBY’s and their Smokehouse Brisket Sandwich, whose commercial guest-starred Neil “Bigmista” Strawder of Bigmista’s Barbecue). Wendy’s new spot featured actors Alfonso Ribeiro and Ralph Macchio,  and wrestler Steve Austin in a humorous faux-awareness cause advertisement. I love it.  If you haven’t seen it yet, watch it below:

It was time to give Wendy’s BBQ Pulled Pork Sandwich a test run. I traveled to my local Wendy’s and ordered the Pulled Pork sammie with Spicy BBQ Sauce (if you didn’t watch the video above, the chain offers three kinds of sauce: Sweet, Spicy and Smoky). I opened the box encasing the sandwich, revealing a good-looking brioche bun filled with a lot, and I mean A LOT of cole slaw (which appeared to contain julienned broccoli) atop a moderate amount of shredded pulled pork. This was going to be a messy meal (like most good ‘que is!) and carefully lifted it up to my mouth. 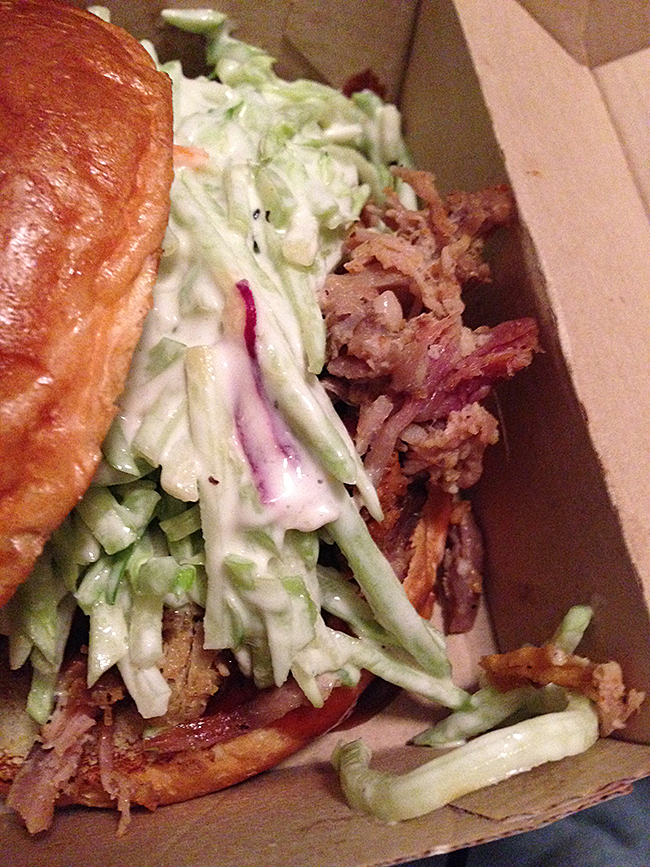 The first sampling was dominated by super-crunchy cole slaw, almost to the point of not being able to taste the meat or the sauce. Now, even though I’m not a huge fan of adorning my pulled pork sandwiches with slaw, I’ve experienced some fantastic BBQ that has had the right touch of crunchy cabbage mix on top of it. But this was too much. Another bite was the ultra-sweet and growingly irritating slaw. I removed the bulk of the slaw just so I could attempt to enjoy the rest of the sandwich’s components.

And to my disappointment, the rest of the sandwich fell into the mediocre range of flavor scale (maybe even into piss-poor territory). I had to spruce up the remains of the sandwich by dousing it with some extra sauce I happened to have a bottle of at the time, and wolfed it down to get rid of it.

I thought to myself, perhaps I just had back luck the first go-around. I ordered another BBQ Pulled Pork Sandwich, this time with their Sweet BBQ Sauce and no slaw. Unfortunately, this one was also a major disappointment. While the Sweet BBQ Sauce was about average, the pork itself was bland, flavor-less, and with no smoke taste present. Folks, I do not know how Wendy’s prepares this product, but I would not be surprised if this was unseasoned, plain-jane pork simply oven-baked in some factory, frozen, and thawed out and microwaved to order.

Wendy’s also offers Pulled Pork French Fries and a Pulled Pork Cheeseburger (the later of which contains the standard burger patty and a cheese slice, with the Pulled Pork Sandwich’s pork and slaw, and to me sounds like unnecessary – and lackluster – overkill).

I’m certainly not a snob when it comes to quick service restaurants. I pig out and enjoy some guilty pleasure items from fast food drive-thrus far more than I, as a food blogger, would want to admit. Maybe I had gotten excited about the advertising campaign and had gotten my hopes up that some decent BBQ fare could indeed come from a place like Wendy’s, but this is a letdown. For around the pricepoint in my area of around $4.79, this is not a good value, nor is it anything I would ever want to purchase again.