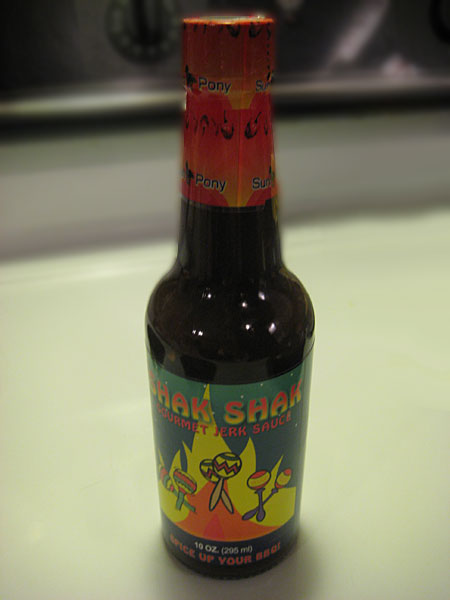 I wasn’t exactly blown away with the previous Sun Pony product I had put through the paces, which was their habanero-based DC Redbone Hot Sauce. It boasted a mighty fine armament of firepower in the chile pepper department, but honestly lacked a good, cohesive taste that otherwise would have made it a sauce one would go to again and again to perk up your meals.

Thankfully Sun Pony has a sauce available I certainly wouldn’t hesitate to recommend in their Shak Shak Gourmet Jerk Sauce. It doesn’t aim to reinvent the wheel; it is basically a standard jerk sauce and performs that job with remarkable astuteness.

If you’re unfamiliar with jerk sauces or seasonings, it’s similar to an American-style barbecue taste yet still light years away from it. Jerk flavoring will almost always contain the peculiar flavors of allspice fused with other spices and ingredients such as chile peppers, nutmeg, cinnamon, garlic, cloves and scallions (green onions). It’s a unique coalescing of tastes that defies simple categorization.

Shak Shak is another winner from the last The Hot Pepper Awards, this time claiming a First Place prize in the Specialty Sauces category.

Aroma:
4 out of 5. Shak Shak’s smell was smooth ans aromatic, and possessed a gorgeously-balanced blend of spice, zest, and sweet. No one or two ingredients overpowered the others, but the cinnamon, nutmeg, onions, and garlic stood out well. 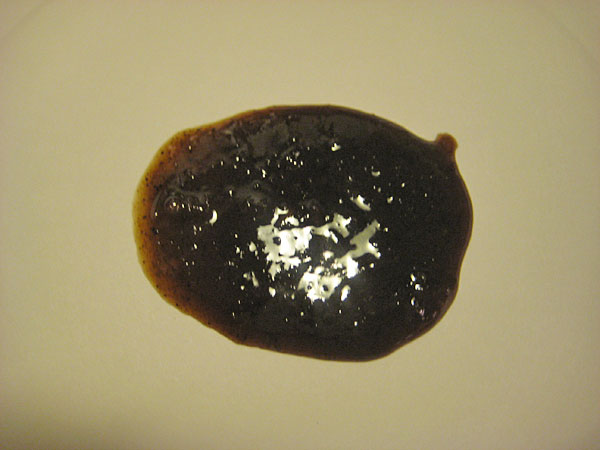 Appearance and Texture:
3.5 out of 5. A deep, dark brown with a medium-thick body and consistency. When poured out, it has a pulpiness and clinginess that will allow to to stick together in clumps, yet it’s fluid enough to pour out of a bottle with ease and even be used as a marinade.

Taste Straight Up:
4 out of 5. Very, very nice. Shak Shak Gourmet Jerk Sauce has a rich complexity that I admire. The sweetness and spiciness give it an easy entry on my list of all-time favorite jerk sauces.

Strangely enough, Shak Shak contains a teensy bit of chile pepper-esque heat. It’s nothing that would burn the insides of your mouth, so if you can’t stand massive amounts of burn, you could still easily consume this with no reservations. Virtually all Jamaican jerk sauces or jerk spices I’ve tried contain at least a small measuring of chiles, most commonly Scotch bonnet peppers.

Why did I find this strange? I studied the ingredients list on Shak Shak’s bottle label and chile peppers were no where to be found. Hmmm. There were things that could be perceived as “spicy”: black pepper, scallions, garlic, and vinegar (which, if used correctly, can make even mild pepper sauces sizzle with it’s puckery tartness). There’s not even a generic “spices” credit given, under which crushed or ground chiles could sneak under the radar. Did they unintentionally leave chile peppers off the list? I’m guessing that the right combination of ingredients in concert with the vinegar gave it a perceived, tangy “bite” and it only seems like it has a capsaicin-like heat to it.

This also brings me to a nit-picky suggestion: I wish this would have been hotter. It’s not just the hardcore chilehead in me desiring this, but as a flavorholic. To me a creme de la creme jerk sauce with true three dimensional flavor MUST have good, smoldering heat. Shak Shak does not.

Taste with Food:
4 out of 5. I marinaded chicken breast pieces overnight in a Ziploc bag full of Shak Shak Jerk Sauce. The cooking method was a pan frying on a skillet. Additional sauce was applied on top after grilling. There was a more than admirable and balanced taste and the product mixed well with the natural juices of chicken meat.

I think this sauce would be equally delicious on both pork and chicken. 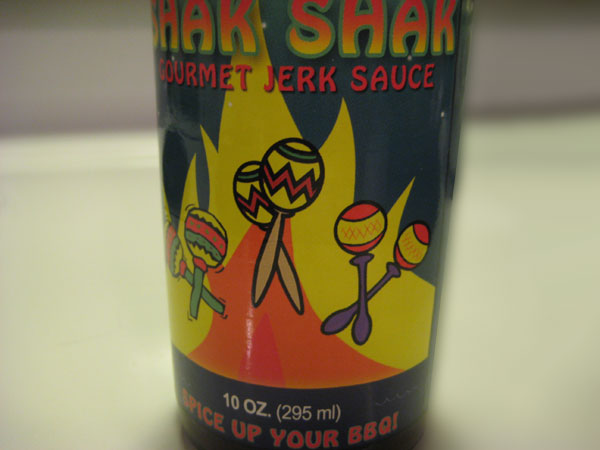 Label:
2 out of 5. Unattractive colors, a cheesy background flame and bland fonts make this a less than desirable bottle. And what’s with the maracas? I get the “shake shake” part from the name (I presume it’s pronounced this instead of “shack shack”), but maracas aren’t the first thing that pops into mind when I think of the words “Jamaican jerk”. A design overhaul would do this thing wonders.

In Conclusion:
Go to Sun Pony’s website and get yourself a 10 oz. bottle for $3.16 plus shipping.

Update – 1/4/10
After I had posted this reviews, I had received clarification from Monica Sanowar of Sun Pony on a few things: