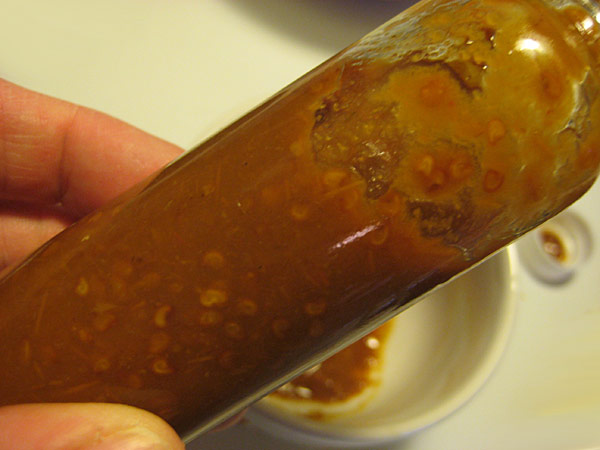 Here’s a quickie review on some chile pepper sauce shipped to me by Alfred Golini from the UK. Alfred had come across a non-descript super-hot chile (or chilli, as those jolly ol’ blokes in England like to spell it) during his visit to Sudan, Africa. When he was back in London, he ground the scorching pepper pods into a mash, and then covered the chiles with water and salt and proceeded to boil the mixture. Alfred took the concoction and whipped it up in a blender, let it cool, and added a small amount of white vinegar. That’s it.

Alfred feels as if this is one of, if not THE hottest chiles he’s eaten. I don’t know exactly what kind of peppers were used (and neither does Alfred). Even though this may or may not be made out of naga/bhut jolokias, trinidad scorpions, 7-Pots/7-Pots or fataliis, this elixir makes for an explosive and potent sauce. 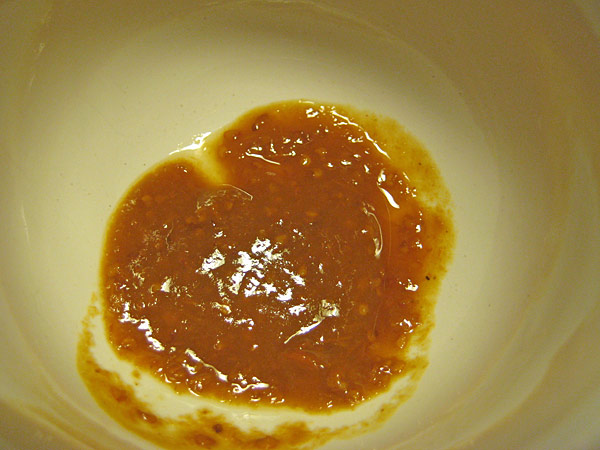 I think it has potential. This is a light, muddy brown mixture dotted with countless seeds and has a sort of thick and smooth texture. Aroma-wise it’s pretty weird – it’s more tomato-like with only the faintest hint of chiles and no vinegar odor. A couple of finger dabs on my tongue revealed what can only be described as a “dark” flavor – there wasn’t much that was bright, fruity or tart about it, so it seemed very uncharacteristic of the natural sweet flavor of your typical capsicum chinense varieties.

Three spoonfuls of this stuff warmed up my tongue only where the sauce touched it. The heat started at a sub-habanero level and increased in ferocity only in the most gradual, incremental moments. It took seemingly forever to reach full force. Man, did the heat ever linger! And only after two or three minutes did the fire spread to the roof of my mouth. Once it did cover the roof, that is where I felt most of the burn. I rarely get this kind of burn; usually the heat coats the tongue and/or the back of my mouth. This felt like I scarfed down a half of a large pizza straight out of the oven and scalded the flesh on the roof of my mouth.

Okay, that last statement is a bit of an exaggeration, but you probably get the idea of where the flammage reared its beautiful head. This liquid wasn’t the hottest sauce I’ve ever had, even if you would take into consideration all-natural, non-extract sauces. But it would be interesting to find out what type of chile was used and why it had the unusual “dark” taste.