This Carolina Reaper based hot sauce from High River Sauces has been out for some time now. If you haven’t been living in a cave, nor have been a shipwrecked survivor on a desert island, you certainly know that the Carolina Reaper was crowned in November 2013 as the world’s hottest chile pepper. Several hot sauce companies have been jumping in the bandwagon, and still are – a bit late-  now doing so as this super-hot is more widely available, in order to both show their skills on how they cook a hot sauce to bring in the potential of this peppers in terms of flavour and heat, and both following the fresh marketing trend to use the keywords “Carolina Reaper” on their label as a selling point.

High River Sauces made a special hot sauce using the Carolina Reaper and named it Foo Foo Mama Choo. It could sounds like a Cantonese interjection, actually this is what Steve’s Seabury daughter said when she tried to cast a spell and change him into a dragon while playing together. This “dragon” is now a sauce, so let’s see which kind of magic has been used inside this appealing bottle, and can it or will we breath fire?!

Label:
4.5 out of 5. Very nice label and eye-catching, showing a fiery dragon head with shades of orange and a persuasive look placed on a bamboo style background.  It couldn’t be a more Asian-style label, maybe a bit cliché, but you can guess from this label a part of what you are going to taste and feel in terms of flavours and heat.

Appearance:
3 out of 5. The sauce is of a reddish colour with bits and chunks of tomatoes and onions, a few seeds, and particles of herbs.

It pours easily from the bottle, or maybe a bit too easily (like “suddenly”!) because of its texture, as some juice starts to run out of the bottle then suddenly a team of tiny tomato chunks fall down in the run which is not very easy to control.

The sauce is not finely blended and lacks of homogeneity, you can see on the plate the juice separating from the pulp made of mostly of tomatoes, pepper and Reaper particles.
From its appearance, it makes me think of a finely blended salsa ready to be dosed on tortillas.

Aroma:
3.5 out of 5. At the opening the bursting flavour is of tomatoes, very much like canned tomatoes in their juice, and next garlicky, and then sweet vinegary aromas from the rice vinegar. There’s a little something citrusy, probably from the ginger. Not much acidity, nothing bad assaulting the nose, and a slightly kind of bitter-sweet aroma from the tomatoes. It does smell very tomato-ish, garlicky, sweet as mix of a Sriracha sauce, sweet Thaï sauce and ketchup. 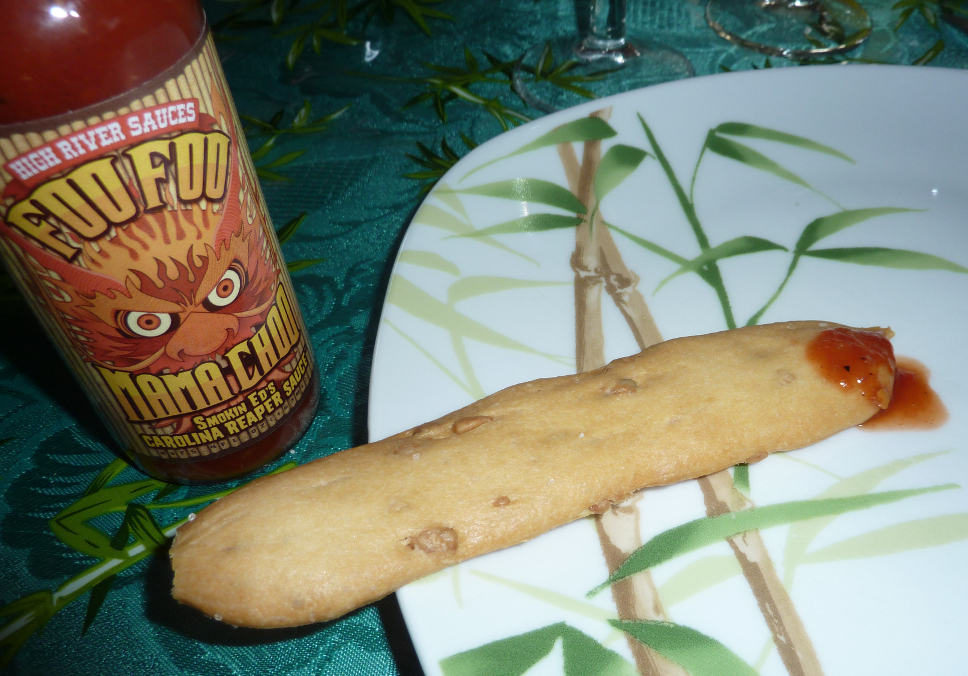 Taste Straight Up and With Food:
3.5 out of 5. The first flavour coming in the mouth is of tomatoes and garlic with a rice vinegar background, and the following taste is of ginger with its citrusy notes, some sweetness and onion in aftertaste while the heat starts to burn the tongue. A salty sensation stays in mouth for a while from the salt added to the whole blend already salted from the soy sauce.

Tasted by itself, I was thinking about eating some Dim Sum (Cantonese dumplings) with Foo Foo Mama Choo, but with a kind of perplexity in mind because of its southwest side of roasted tomatoes and peppers. Anyways, I tried it with a burger.

Mixed with the other ingredients in my mouth, if you forgot about its appearance you could swear that the sauce used is a kind of super-hot Asian style ketchup. I also tasted things with a neutral Saucisson de Lyon (boiled sausage cooked with potatoes), and it complimented nicely the dish with a few drops, adding subtle flavours and some heat, depending on how much you use of course.

After reading the ingredient list, I had still a mystery to solve from the so-called “secret herbs and spices”. Hard to say, as visually there is a bit of powder particles and of a dark herb such as sage or basil. In the aftertaste, there is something close to celery seeds or coriander seeds, and a tiny pinch of a citrusy/anise-like flavour such as caraway or fennel, a kind of oriental spice.

Heat:
4 out of 5. The heat is building slowly, spiking a little bit at the beginning than growing step-by-step and storing up as long as you keep eating. When you stop you can feel the heat climbing up from your stomach to your throat and mouth to your burning lips, as I did with a burger.

This variety of peppers burn – especially under the tongue – in a special way. The fact is, in my point of view, it seems that the ratio of Carolina Reaper peppers used in the sauce seems a bit low, but it’s easily understandable in terms of product cost, and of product positioning as a gourmet sauce where the flavour is more important than the heat. In order to make it a sauce with the Carolina Reaper still edible for those with a lower heat tolerance than the diehard chileheads, these last ones would have certainly expected this sauce to be a bit hotter anyway.

Overall impression:
3.5 out of 5. Hot peppers, garlic, sugar, an Asian-style label…you could expect it as a Sriracha-style sauce surfing on the Carolina Reaper wave, there’s a bit of both, at least in terms of product image.

It has an Asian-style profile mixed with a style from the southwest like a New Mexican chile sauce with its roasted tomatoes & peppers, a thick texture, but here not homogeneous.
From its Asian-style side you will enjoy it from noodles to Dim Sum or simply anything where you would use some Sriracha style sauce and would like much more heat and more complexity. From its southwest side you can use it from burgers to boneless rib sandwiches, and while you’re at it, why not in burritos or splashing your chili con carne with it.

Recommended for any white meat, and last but not least, why not test it in any tomato base from a homemade pizza to Spaghetti Bolognese…you see, High River Sauces Foo Foo Mama Choo Hot Sauce is versatile and international!

For more information, go to http://www.highriversauces.com.
You can visit Matt Le Gal’s website at http://www.capsicums.fr.