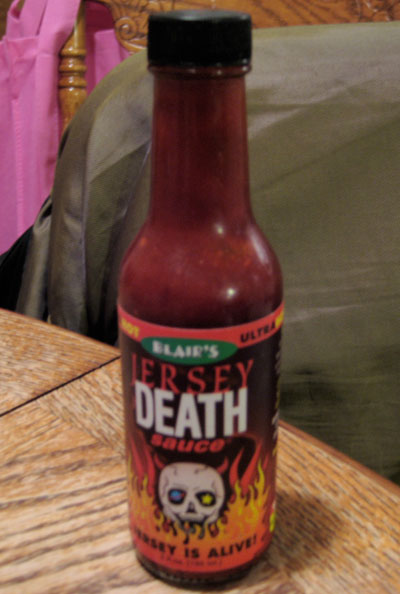 For my latest review, it’s time to bring out the big guns: Blair’s Jersey Death Sauce. When it debuted a few years back, it was the hottest “regular” sauce in Blair offered, not including reserves and specialty items, and the “king” of the Death Sauce lineup. How hot is it? Well, right on the bottle’s label, it reads this:

“Be warned: this sauce contains ingredients 750 times hotter than a jalapeno chile. Use sparingly. Jersey Death should not be consumed without dilution.”

Most likely not. Mega Death, the runner-up in Blair’s spicy sauce line, features the same warning on the bottle, only it states “500 times hotter than a jalapeno” opposed to Jersey’s 750. Since Mega Death was tested to be an estimated 500,000 – 550,000 Scoville units, we can probably estimate that Jersey clocks in somewhere around the 750,000 – 800,000 range.

And it does not technically say the Jersey Death Sauce itself is that hot – it’s the super-blazing extracts used within the sauce (and mixed with milder components) that are. The label reads “this sauce contains ingredients 750 times hotter…” and not “this sauce is 750 times hotter…”, so it’s technically not a fabrication on Blair’s part if it is indeed around 750,000 SHU.

Bottom line is, Jersey Death would be one of the spiciest things you’ve ever consumed, and should not be toyed with.

Taking the Challenge
I’ve been using my bottle for over a year, but for the sake of this review I decided to try this straight on a tortilla chip. 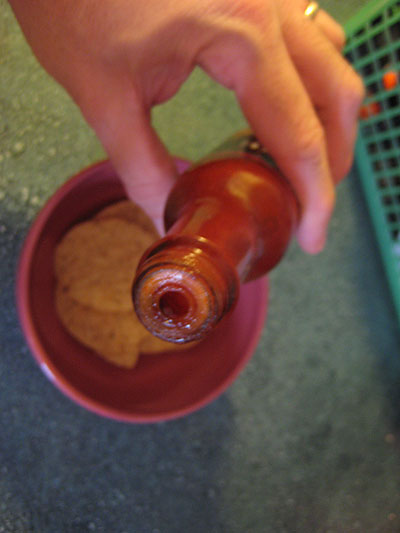 As you can see in the photo, Jersey Death comes with a handy-dandy dropper at the end of the bottle. I gave a chip a healthy-sized drop: 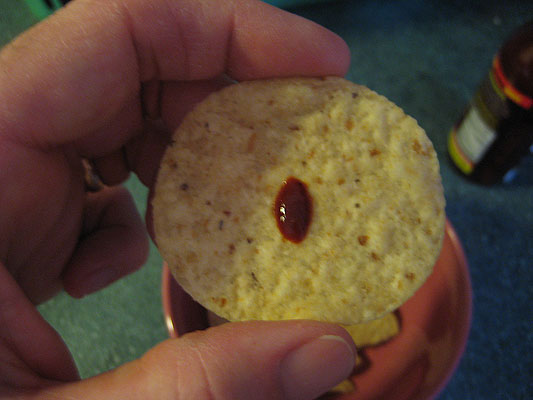 I popped the chip in my mouth and started chewing. Almost immediately I felt a small burn. Over a period of 30 or seconds, the heat gradually grew and grew until it reached astronomical proportions. My tongue felt as if a flaming vice-grip was squeezing it from all angles. The sweet, throbbing pain soon turned into a hot numbness, and then subsided after approximately five minutes. I loved every second of it.:)

Next up was chili that my wife had cooked that afternoon. I got myself a half of a bowl, and splashed in a healthy-sized drop of Jersey. 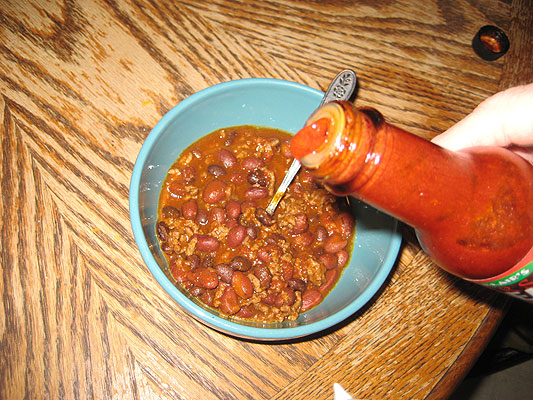 I placed it on my spoon and gave it a good stir. 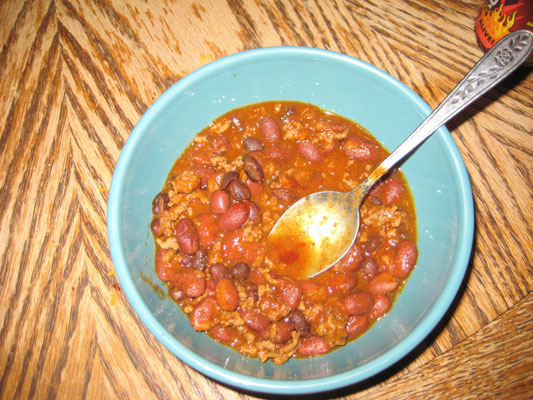 It was delicious. Jersey Death is perfect for spicy foods such as chili. The drop I added in complemented the food well with it’s own unique taste, yet didn’t overpower the chili’s original flavor.

Aroma:
2.5 out of 5. Expectedly, the smell is very, very pungent, yet a mild whiff is not enough to send you into a coughing fit. While it is somewhat pleasant, the aroma is not exactly what I would call “appetizing”.

Texture and Appearance:
4 out of 5. It’s got a deep crimson hue with hints of spice specks and seeds combined in the liquid. As with most extreme hot sauces, the dark extract “oil” will rise to the top of the bottle, so this stuff requires a good shaking before every consumption. Jersey is thick and rich, kind of like a Heinz’s Ketchup from Hell.

A feature I love is the “dropper” spout that prevents too much from coming out with each pour. Mega Death lacks this, and more than once with Mega a huge glob came rushing out whenever I attempted to splash a small drop on my food.

Taste:
3.5 out of 5. Jersey has a “dark”, yet surprisingly complex taste. While it numbs the tongue you are able to detect habs, vinegar, and even a touch of tomato flavor. Extreme sauces I’ve sampled from other manufacturers weren’t able to get around the strong, bitter, “chemical”-like taste, and luckily Blair has avoided this for the most part.

Heat:
5 out of 5. Or should that be 10 out of 5? This is crazy, wacky, zany hot. Any more than a drop or two would be too much. If you’re a chilehead, a droplet on a toothpick would be sufficient to get a first taste. If you’re the type of person who thinks mild condiments such as Tabasco are hot, than you have no business even trying Jersey Death.

Label:
5 out of 5. Very cool label. An explosion of colors and images. It’s got the state of New Jersey in the background, with a horned Blair “Death Skull” sitting in the mist of flames. The skull is googly-eyed with a ringed planet and a star for peepers. In my opinion, this hints that you must be certifiably loony to eat this sauce.;-)

If you were to buy any bottle of Blair’s Death sauces (Jersey included), you’ll get a nifty little skull key chain affixed to the bottleneck’s plastic seal.

Overall:
This is a very pleasing additive that should go well with a variety of foods. Just make sure that you employ only a few drops in your cooking excursions, as Jersey Death should not be the “main event” flavoring. My suggestion is to let other sauces and spices take center stage, and delegate Jersey to a supporting role that will compliment other flavors and add a scorching blast of heat.

Jersey Death has been replaced by Ultra Death in Blair’s “Death Sauce” lineup, and as far as I know, is no longer being manufactured. According to the Ultra Death Sauce page on the Blair’s Sauces and Snacks website, Ultra is advertised as “800 times” hotter than a jalapeno, so it may be safe to assume that it is very similar to Jersey (if not identical and is simply a rebranding). You can still find Jersey death at many online retailers, or order the newer Ultra Death from the link above.