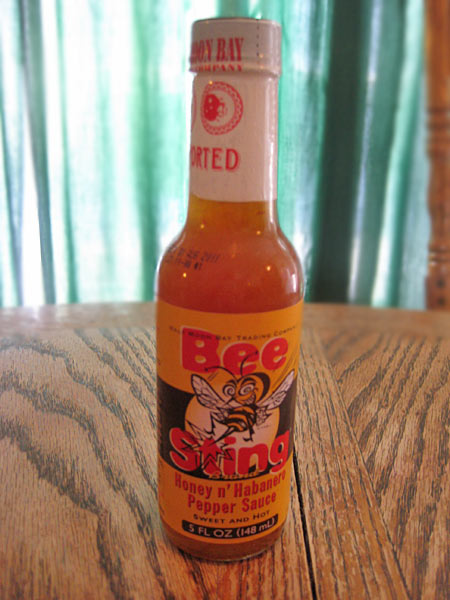 One of my “guilty pleasures” in sauceland is Buffalo Wild Wings’ Mango Habanero sauce. It’s sticky sweet similar to honey, pours thick, has a dynamite taste and packs some chile pepper heat.

I’ve tried out a few honey-infused hot sauces in my day, but to me that Mango Habanero has remained the quintessential “honey”-type sauce. However, I have been and will continue to be open to any syrupy or honey-esque hot sauces on judge them on their own merits.

Along comes Bee Sting Honey n’ Habanero Pepper Sauce produced by the Half Moon Bay Company. Although I admittedly have never tried anything under the Bee Sting line, Half Moon bay has a good track record of sauces and salsas (I love a few of their Iguana sauces in particular), so I was chompin’ at the bit to see if this worth any buzz.

Aroma:
3 out of 5. Predominantly honey, with a light sensation of something hot, such as the mixture of peppers and vinegar. I could also detect a smattering of garlic. Since I’m not a huge fan of that normal, sweet honey smell, this didn’t do much for me.

Appearance and Texture:
4 out of 5. Bee Sting Honey n’ Habanero Pepper Sauce possesses the luscious golden color of honey, yet interspersed are orangish-red flecks of chile peppers and carrots. This sauce is thick, but no where near as viscid as regular honey is – it’s pourable, more watery and not nearly as sticky. 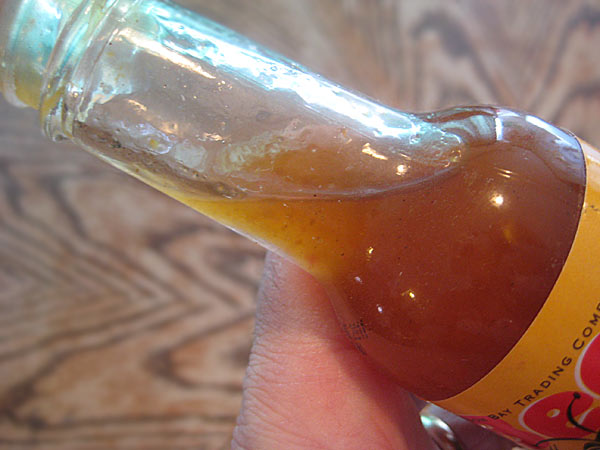 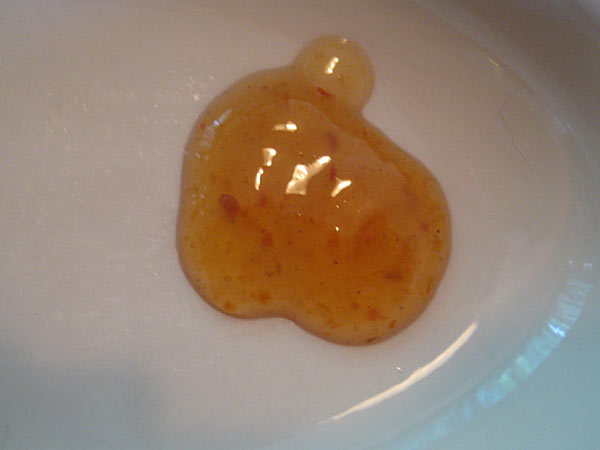 Taste Straight Up:
3.5 out of 5. Half Moon Bay Company have done a nice at combining honey and heat. As you should all know, sweetness and fire are one of my favorite flavor combos, so anyone who does a halfway decent job has already earned a few points in my book.

The taste, unlike the aroma, is not necessary all honey with its gooey sugariness. The initial taste was a blast of sour and heat fueled by the vinegar, lemon juice, habaneros and cayennes. Seeping through was a slight bristling of sweetness. It had character and balance and the plethora of ingredients all had their place in the mix and didn’t overpower one another. The finish was admirable and sweet with no nasty aftertaste – only a warm burn left simmering on the tongue.

This having been said, it simply didn’t thrill me. Maybe if I had it with a dish or two I’d warm up to it…

Taste on Food:
2.5 out of 5. On its label, Bee Sting Honey n’ Habanero Pepper Sauce is billed as an “Asian-Thai influenced” cooking ingredient. This got me thinking rice, stir-fry greens, fish, shrimp and chicken…in other words, light meats and vegetables. As a quickie experiment, I grilled up a chicken breast totally plain over a low heat. I applied the sauce not as a glaze, but as a finishing sauce. 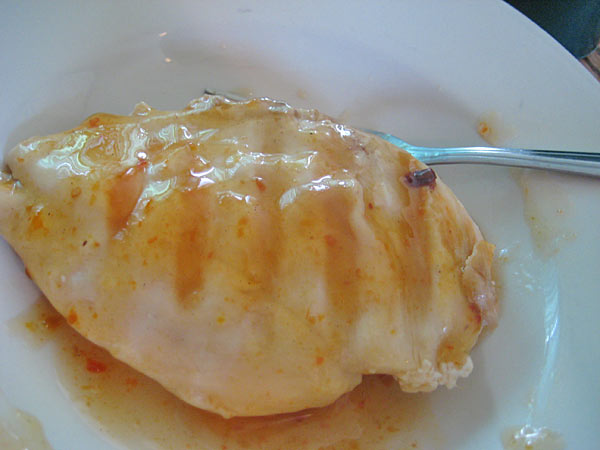 Bee Sting adhered to the meat rather well and give it a nice, moist coating while mixing with the chicken’s natural, internal juices.

I think in addition to Chinese, Japanese and Thai dishes, grilled white meat and seafood, this may be worth a shot as a fiery dessert topper or as a dipping sauce for fried chicken.

Bottom line, I simply could not get into this sauce that much. “On paper” and even after the first physical tastes I thought it was a sweet and palatable condiment, but this wouldn’t be a product I would desire to return to again and again, and would rather have other, more proven sauces in their place.

Heat:
3 out of 5. This starts out with a small fiery bang but does not escalate up the heat scale much beyond that. It crawls into territory that may make it a bit too hot for mild food fans. Chileheads will find it very warm and comfortable.

Label:
4 out of 5. Vibrant yellow and black colors with creative red fonts make this work very well going on the “bee” theme and is eye-catching and cartoon-y without being horrendously gaudy.

In Conclusion:
This may be the best-tasting sauce I’d had in a while that I probably didn’t have the utmost desire to use again right away. I may try this out as a glaze or marinade to see what happens, but until then it will probably just occupy a spot in my refrigerator door.

Bee Sting Honey n’ Habanero Pepper Sauce is available at here for $5.35 plus shipping for a standard 5 oz bottle.