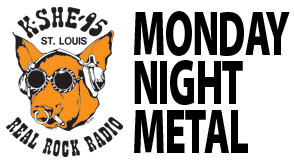 One of the most influential (and fondest) forces in my “musical upbringing” was the Monday Night Metal show on KSHE 95 in St. Louis. It debuted in 1985 and came on Monday nights (and later Tuesday nights – more on that in a bit) at 10:00 PM, giving us hard-rock-loving devotees a 2-hour-long dose of ass-kicking heavy rock. Since by that time I was a teenager, so I was usually able to listen to most (if not all) of the program week after week.

The AOR-formatted KSHE in the mid-’80s rarely played anything that was truly heavy. Sure, we would get to hear some Led Zeppelin, ZZ Top, or Van Halen, but even a Black Sabbath, Judas Priest, or Scorpions song was heard few and far between the usual lighter fare of Sugarloaf, The Moody Blues, and Emerson, Lake and Palmer. Heavy metal music was becoming big in the U.S. in ’83 and ’84, so I assume KSHE developed this radio show to cater to the throngs of new metalheads demanding more airplay of their favorite leather and spandex-clad groups.

Stalwart DJ “Radio” Rich Dalton handled the MNM hosting duties. He transformed into his “alter-ego”, “Radical” Rich. It was a joke on the radio station that no one supposedly knew that “Radio” Rich and “Radical” Rich were the one and the same person (of course, everyone in the listening audience knew better). Speaking in a gruff and insane “disguised” voice, “Radical” Rich humorously claimed to be broadcasting from his fictional, loony-bin “Fisher-Price” studio in the deserted town of Times Beach, Missouri as he spun records of both classic and up-and-coming metal bands.

Monday Night Metal was the show that brought me to know SO many musical artists. I heard Metallica and other thrash practitioners for the first time to my tender, young ears. “Radical” Rich once debuted a few instrumental tracks from a man who was the guitar teacher of prodigy Steve Vai (who at the time had recently gained fame and acclaim as David Lee Roth’s axeman). Of course, everyone knows the teacher now as the one and only Joe Satriani. Accept, Tesla, Queensryche, Yngwie Malmsteen, and Guns N’ Roses were all introduced to me on the program. I ate it all up. And all the overrated, musically-inept, and mostly crappy 1980s pop artists that are lauded about nowadays – The Cure, Talking Heads, Devo, and Simple Minds – I had outgrown them and left them far behind in the back of my mind.

Rich gave us a sneak peek of the first recordings released since the great Randy Rhoads passed away that was from Ozzy Osbourne’s 1987 Tribute album. I had recorded that part of the show on cassette tape, transferred it to my microcassette recorder, and played it half-speed to so that I could copy the notes in Randy’s guitar solo easier on my guitar. For as much headbanging MNM encouraged, it was also guitar virtuoso heaven.

One of the most memorable aspects of MNM was Radical Rich’s opening monologue that would begin every show. Rich would speak it over Van Halen’s “Eruption”, Eddie’s famous guitar solo from the group’s 1978 debut album. It may be sad that to this day I still have it memorized, but here it is nonetheless:

“On your feet or on your knees, it’s the United States of A-metal-ca, crank it up, blast it out, get with the metal mania (monster)!
Mama’s boys, with dogs, dorks, nerds, wusses, weenies, yuppies, preppies, crappies, run home to your mamas, we’re gonna kick ass and take names!
It is I, Radical Rich, bringing you the sound of the unsound…….”

“It is time for the Caress of Steel, the Tumult of Titanium, the Power of Platinum, play Eddie (Edward)!”

Eddie Van Halen continues playing furiously in the second half of “Eruption” until the two-handed-tapping section, and Radical Rich continues…

The items in the parentheses were the things that Radical Rich either alternated or added in the future.

A few years later I remember an intro song being added (presumably by a local St. Louis group) with the chorus of, “It’s time for Monday Night Metal!” It was a fairly heavy song – not exactly slow, thick thrash, but it still rocked compared to some of the pop metal dominating the charts of the day – and contained loads of fast guitar licks and tapping fills.

KSHE started airing Rockline in 1987, a weekly rock interview program syndicated nationwide by the Westwood One satellite network. The problem for MNM was that Rockline had a live-caller format, so moving the new show meant no real-time phone calls from any rock fans, therefore MNM had had to be rescheduled – to Tuesday nights. Ha! I imagine the title “Tuesday Night Metal” sounded too clunky, and Monday Night Metal had a much nicer flow to it, so the show kept the same title. Trying to explain why a radio program that aired on Tuesdays was called Monday Night Metal to the uninitiated was a silly exercise and even sort of became an inside joke to my friends and me.

Following Dalton’s departure from both the show and from St. Louis radio altogether in the early ’90s (I believe he became a DJ in the Los Angeles area?), the “Eruption” intro was ditched and a take-off on Guns N’ Roses “Welcome to the Jungle” called “Welcome to the Metal” was added at the start of the show. MNM continued to feature an array of classic and new heavy rock bands plus some of the burgeoning quasi-alternative and funk metal artists.

I don’t recall the exact year (1993? ’94?) when the show was canceled, probably since a) new metal was on the way out, thanks to the dominating alternative/grunge scene, or b) hard rock had gone “mainstream”. It was most likely Nirvana and company that killed the interest in “regular” metal, but it should be noted that KSHE was slowly switching from an AOR/classic rock format to having harder-edged classic rock “hits” playlists. “Softer” classic rock artists such as Crosby, Stills, and Nash, Billy Joel, and The Beatles were removed from the station’s airwaves, and groups like Zeppelin, Van Halen, and KISS became dominant.

Radio is always in a state of flux, and the St. Louis market was no exception. A short-lived “classic rock that REALLY rocks” station that dubbed itself “The Rock” took the 97.1 frequency on the radio dial. They pushed the envelope further by featuring even heavier bands in their rotation and (for the most part) avoiding the likes of the Bruce Springsteens, the U2s, and John Mellencamps. Artists like Motley Crue and Ratt which were barely played on KSHE in earlier years became staples of The Rock’s daily sonic output.

The reason I mention 97.1 The Rock is because of the fact that they briefly resurrected the Monday Night Metal program – on Tuesdays, just like it was in the later KSHE years. 97.1 switched to the talk format in 2000 and out went MNM yet again.

What goes around goes around, and Monday Night Metal had yet again returned on its original station in the summer of 2006. Tom “Real Rock” Terbrock, producer and co-host of 97.1 Talk’s Dave Glover Show, was granted a 12-week “trial” run of MNM, and thanks to an enthusiastic listener response the program was given the green light to go indefinitely. The metal-loving Terbrock gives St. Louis music fans one of the few reasons to continue to listen to terrestrial radio (because let’s face it – local radio sucks, and internet and satellite radio give you MUCH more variety), as he beautifully balances 40 years of bone-grinding metal with wonderful adroitness.

One thought on “Reminiscings About Monday Night Metal on KSHE”