After much recent teasing and stringing along I’ve done as of late, a
pair of chile-related websites have made their debut – ILoveItSpicy.com
and SpicyRV.com. 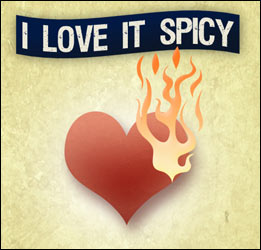 Al “Buddah” Goldenberg, myself and other chileheads have debuted a new
blog called I
Love It Spicy that’s geared toward covering everything from
reviews to product recommendations to industry shows & festivals and
more, all on video.

Buddah is currently chronicling activities from this past weekend’s
North Market Fiery Foods Festival in Columbus, Ohio that he captured
on video – a jalapeno eating contest, a wing contest, and lots more
excitement from the show that you don’t want to miss.

There are big plans in the works for I Love It Spicy team getting
clips of next week’s National Fiery Foods & BBQ Show in Albuquerque,
New Mexico on video. There has also been talk about me getting
hypnotized on camera during the show, but I can neither confirm nor
deny those claims…

Spicy RV is a
group of wild, ragtag chileheads (headed up by the possibly sane,
probably insane James Beck of EatMoreHeat.com) who will be commandeering a tour
bus and attempt to make a fiery pilgrimage from Houston, Texas to the
National Fiery Foods & BBQ Show (abbreviated NFFS below). The road
trip will be documented on their blog both in written and video formats, so
be sure to track their progress closely as they eat some of the
spiciest food on earth, drink enough margaritas to make even Nick
Nolte’s and Gary Busey’s livers scream for mercy, and hopefully keep
the Highway Patrol at bay before making its grand arrival at the NFFS
next week.

Before I close this post out, I shouldn’t neglect to mention that the
NFFS event that both of these websites will be visiting will be joined
by the Fiery Foods and BBQ SuperSite itself in providing online video.
From March 5th through 7th, you can watch both pre-recorded and live
streaming segments from the NFFS at Fiery-Foods.com.