In Austin, Texas, the IBM Watson Food Truck served up exotic dishes that explore computing’s culinary creativity, at the South by Southwest (SXSW) event. The recipes were created through a collaboration between IBM Watson and award-winning chefs at New York’s Institute of Culinary Education.

One such recipe was a BBQ sauce. Yes, that’s right, a recipe for a BBQ topper that was created solely by a computer program.

Mark Wilson of Co.Design recently was shipped a bottle of the product, and here is what he he had to say: 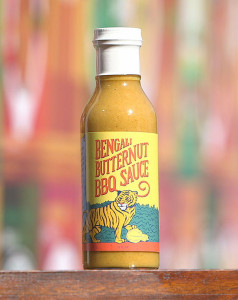 Not so long ago, IBM shared Watson’s cooking methodology and first public recipe with Co.Design. Shortly thereafter, they opened a food truck at SXSW. And they also sent a lucky few journalists a beautiful bottle of Bengali Butternut BBQ Sauce, a golden, algorithmic elixir born from the silicon mind of Watson himself.

When I unwrapped the brightly colored box and found the bottle inside, I immediately flipped to the back label. Most BBQ sauces start with ingredients like vinegar, tomatoes, or even water, but IBM’s stands out from the get go. Ingredient one: White wine. Ingredient two: Butternut squash.

I pour a bit of the bottle onto a plate of roasted tofu and broccoli – even a pork lover has gotta watch his cholesterol–and tentatively took a bite. Watson’s golden sauce may have the pulpy consistency of baby food, but it packs a surprising amount of unique flavor.

You can read Wilson’s entire account of the programming-made condiment over at http://www.fastcodesign.com/3027687/i-tasted-bbq-sauce-made-by-ibms-watson-and-loved-it