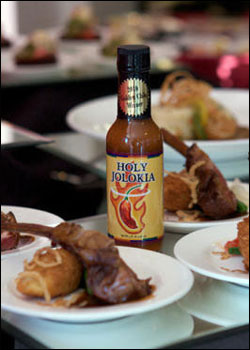 Courtesy the Silver City [New Mexico]Sun-News [Note – I did correct a typo or two]:

But the real measure of how hot a pepper is comes from the reaction of the person biting into one.

And depending on the Scoville units of the pepper, reactions vary from a red face to pouring tears coming down your cheeks.

Some peppers high on the Scoville chart can leave chileheads sucking air over their tongue, coughing and in extreme cases swollen eyes.

One such pepper, the Bhut Jolokia or the Ghost Chile – the world’s hottest pepper – has a Scoville heat rating of one million units. In comparison, Tabasco Sauce has a heat rating of 1,500 Scoville units, and the habanero has a rating of 100,000 – 350,000. The bhut jolokia is supposed to be 200 times hotter than a jalapeno pepper.

“It doesn’t look that dangerous really,” Paul Bosland, the director of the Chile Pepper Institute said, pointing to the orangish-red, triangular short-tailed pepper. “It comes from the habanero family and it has a delayed heat. Almost everybody who tastes the Bhut Jolokia says the first bite is not too hot, but when they take a second bite and when the first bite kicks in, we’ve lost you.”

Some say the pain is so exquisite, it’s like having your tongue hit with a hammer.

Bosland’s research led to the Bhut Jolokia being named as the hottest chile pepper in the world, according to the Guinness Book of World Records.

But the Holy Jolokia hot sauce is all about flavor, not melt-your-face-off heat.

“The Holy Jolokia is not really that hot,” Bosland said of the hot Louisiana-style sauce. “We wanted a quality product that would taste good. There is more to chile than just heat. There is the complexity and levels of flavor that Holy Jolokia can bring out.”

That is where John Hard, the owner of CaJohn’s Fiery Foods, comes in.

Hard, who has been in the chile pepper business since 1996, considers himself a habanero specialist, so working with the Bhut Jolokia pod was a new experience.

“We had worked with dried chile powder before, but there is nothing like working with fresh pods,” he said. “This sauce has both fresh pod and dried pepper in it to get a deeper flavor profile. We chose to put it with the Louisiana-style sauce so that it would reach into the table sauce area of Tabasco.”

Hard said with the sauce coming out of a bottle people are familiar with, it makes it easier for people to use.

“People are not so reluctant to put them on soups, stews, fried foods,” he said. “Dr. Bosland wanted something that was not all about killing people or burning them up but he wanted a lot of flavor. It was an exceptionally chile to work with because of its citrusy notes, so it was real easy to blend it into the Louisiana style.”

The Holy Jolokia, which won two first place trophies in the hot sauce category at the 2009 Zest Fest Fort Worth, is the only hot sauce in the market that uses 100 percent Bhut Jolokia.

Daniel Guerra, a chef/instructor at El Paso Community College, combined the Holy Jolokia with blackberry for a demi-glace used for a rack of lamb and as an ingredient in a chocolate mousse.

“The sauce was very good,” he said. “It wasn’t so spicy where you couldn’t handle it. It was pretty well balanced. I enjoy doing the sweet and the savory. It’s fun to play with something so spicy and incorporating it with the sweetness of the desserts.”

Bosland, the Chile Pepper Institute director, said he really doesn’t like the really hot, hot sauce but the Holy Jolokia is exceptional.

“I always recommend one drop just to see how you like it, then two drops, then three drops,” he said. “But don’t do it all at once. It has a very nice initial flavor, a very nice aftertaste, and it really has a nice complexity that we are looking for in this hot sauce.”

Victor R. Martinez writes for the El Paso Times, a member of the Texas-New Mexico Newspapers Partnership, and may be reached at vmartinez@elpasotimes.com; (915) 546-6128.