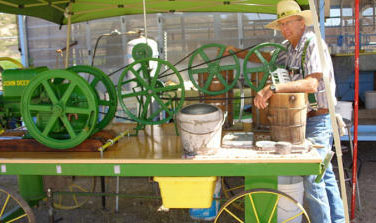 SILVER CITY — There is a lot of green in the tractor display at the Cliff/Gila Grant County Fair this year, and some of it has carried over to the ice cream stand where green chile ice cream is being made using a green 1924 John Deere “Hit-n-Miss” engine to power two antique ice cream makers. Proceeds from sale of the ice cream at the fair benefit the Silver City Museum.

Silver City residents Norman and Deleen Ruebush call their novel ice cream business “Ice Cream for Any Occasion.” It grew out of their shared passion for antique tractors, which they collect and restore. The John Deere-powered ice cream machines are mounted on a covered trailer and make an interesting conversation piece as they churn out perfectly edible ice cream.

The green chile ice cream is a relatively new addition to the business.

In honor of the occasion, he and his wife created ice cream featuring the hot peppers that are the centerpiece of the Hatch festival.

“We offered red and green chile ice cream, which goes along with the New Mexico state question: red or green?” he said.

At the county fair this week, they have answered the question themselves. Green chile ice cream is the only variety they’re offering, although they do have plain vanilla ice cream for the faint-hearted.

Although the green chile ice cream is not seriously hot, it does have a distinct chile nuance to it.

“We try to get it so you know the chile’s in it,” Ruebush said. “What’s the point of having it in the ice cream if you can’t taste it?”

Green is appropriate since that is the color John Deere tractors are noted for, and the Ruebushes specialize in John Deere tractors and engines. Now nearing 70 and retired from the meatpacking business he operated for many years, Norman has time to indulge his interest. A member of the Board of Directors for the Silver City Museum, Ruebush offers viewings of his tractor collection through the museum. Several of his restored antique John Deere tractors are on display in the tractor show at the fair, along with tractors brought in by other local residents who share the passion for vintage farm equipment.

Among the exhibitors is 65-year-old Ray Remondini of Cliff, who can usually be found during the fair under a canopy at the far end of the tractor display, lounging in a rocking chair he built himself from two metal tractor wheels and a tractor seat. There’s a second rocking chair of similar construction nearby that is available for the use of visitors.

“I’ve had tractors for many years, but I started getting interested in these old tractors and collecting them about 20 years ago,” Remondini said. Nearly all are John Deere tractors. “Nothing runs like a Deere, you know that,” he said.

Remondini’s son Jerry, 44, shares his father’s fascination with antique tractors in general and John Deere tractors in particular, and pulled into the fairgrounds Thursday afternoon with two new acquisitions.

“All of our tractors are in working condition, except for the two I just brought in,” he said.

He and his father will eventually have those two working again, too.

Of the 11 tractors the Remondinis have brought in for display at the fairgrounds, Ray Remondini said few are now used for actual farmwork.

“Most of them just stay parked. Toys, in a way, I guess.”

Or perhaps these lovingly restored tractors are something else entirely. Perhaps they are carefully preserved bits of our farm and ranch history that would be lost forever if not for these dedicated individuals.

Other area residents with antique tractors on display at the fairgrounds include Freddie Chappel and Tom Houghton, both of Cliff, and Charles Souders of Silver City.

The tractor show continues at the fairgrounds until the fair closes Sunday at noon.