You could win this awesome hot sauce prize pack if you copy the phrase I hold up on this sheet of paper verbatim (include any punctuation, hyphens, cross every t and dot every i). You can be eligible only if you are not attending any of the 3 days of the Fiery Foods Show in Albuquerque, NM in 2010. Send the phrase to the e-mail address in this video to enter. You have until 11:59 PM Central Time Monday, March 8, 2010 to enter. Any e-mails received after that date and time will be disqualified.

This is not affiliated with the National Fiery Foods and Barbecue Show or Sunbelt Shows, Inc.

I will be posting the Hot Sauce Giveaway Contest video tomorrow, Saturday March 6 at 12:30 pm Eastern/ 11:30 am Central.

If you were unable to attend the Fiery Foods Show this weekend, then this is the contest just for you. Simply couple the phrase I will hold up on a sheet of paper verbatim and e-mail it to be. Good luck!

Don’t miss the BBQ Central Radio Show‘s episode tomorrow, Tuesday, March 2nd. BBQ legend Johnny Trigg of Smokin’ Trggers and TV’s BBQ Pitmasters will be the main guest, and show host Greg Rempe will have a segment on what it takes to open your own barbecue restaurant. In the third segment, I will join Greg for my monthly assessment on a few BBQ sauces and rubs I’ve tried and tell you, the listening audience, whether or not I think they’re worthy of your time and hard-earned money.

You can tune in live at 9:00 PM Eastern/8:00 PM Central at http://www.thebbqcentralshow.com, or listen to the show at a later date by subscribing and downloading the podcast at http://itunes.apple.com/us/podcast/the-bbq-central-radio-show/id279116889. 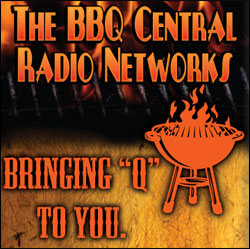 I’m thrilled to announce that I’ve joined another podcast. This is one that I’ve been a fan of for a couple of years…it’s the weekly The BBQ Central Show, hosted by none other than Greg Rempe. I made my debut on last night’s live episode, and I will be returning monthly for a segment where I will be reviewing barbecue sauces, rubs and seasonings and sometimes hot sauces. As of now, I’ll be tentatively scheduled on the first or second Tuesday of the month, depending on what date it falls on (there will be more clarification on the dates as they approach).

To listen to the February 9, 2010 edition of the BBQ Central Show, you can click here to download the MP3.

Even if you’re not huge into backyard grilling or barbecueing, The BBQ Central Show is still a very enjoyable and fun listen. You can Subscribe via iTunes or you can Subscribe to the RSS Feed with MP3 for listening on your …