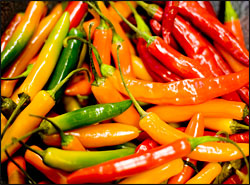 Peter Piper picked a pepper. If he had the new technology developed by one Baylor professor and his research team, he could have discovered just how hot the pepper was.

Dr. Kenneth Busch, professor and co-director of the Center for Analytical Spectroscopy, and his research team have eliminated the need for liquid chromatography in determining the heat of chili peppers.

Working with Busch are his wife, Dr. Marianna Busch, professor and co-director of the Center for Analytical Spectroscopy, Dr. Dennis Rabbe, chemistry laboratory coordinator and lecturer, various graduate students and an undergraduate student.

“The way you conventionally determine the hotness of chili peppers is with liquid chromatography,” Kenneth said. “You have to grind up the pepper in a blender and then extract the capsaicin (a molecule that gives chili peppers their heat) that you’re trying to measure with alcohol and then run it through the chromatograph.”

Rabbe said capsaicin has not been analyzed through multivariate analysis in the past but can have important application.

“Capsaicin is used of course in the food industry and medicinally, and the analysis of peppers for the capsaicin content is really important, and with the techniques that they are working on, it would simplify it, make it faster to do and less expensive,” Rabbe said. “The multivariate analysis has not been used in analysis of capsaicin before.”

Marianna said the research could help farmers know the best time for harvesting.

“What we wanted to do was develop a simpler more rapid method where we could do the analysis much more quickly. It’s apparently very critical when you harvest it as to how hot the peppers are going to be,” Marianna said. “It would give you some kind of a feeling for the optimal time to harvest them in the field. It’s a completely different way of assessing how spicy a pepper would be … like in a salsa, for example.”

Kenneth said the research is still continuing, and the team hopes to find a method using fiber optics that will allow them to test the heat of a chili pepper without damaging the pepper itself.

“We’re trying to see if we can use that approach to take the spectrum, rather than take the spectrum of the extract,” Kenneth said. “And that might be something that people would be interested in because you just have to hold the pepper up to this light fiber and get the information, without having to touch the pepper — you can still eat it afterwards.”

Rabbe said an undergraduate student, San Diego junior Emily Schmidt, has been working on the research since the fall and is helping to improve the current procedure.

“We’re trying to refine the procedure that they’ve already done,” Rabbe said. “She’s working with us again this spring.”

Marianna said the team’s use can also have other applications, such as pharmaceuticals or forensics.

“In a lot of cases this is this marvelous statistical technique that’s out there and there’s all kinds of things you can do with it. It’s just a question of what do you need; where’s the problem?” Marianna said. “When you’re in the field of chemical analysis, you’ve often got methods and you’re looking for problems. We’re looking for problems that we can apply our techniques to that are really important.”

Marianna said one graduate student who previously worked with the team is now working on using multivariate statistics in forensics.

“She’s trying to apply this to the analysis of bones. In forensics there’s a real problem about determining the time of death. There’s a time period between very recent and quite old where it’s difficult to tell,” Marianna said. “She’s interested in applying the multivariate statistics to bone samples to determine the age of the bones.”

Lori Baker, associate professor in the department of anthropology, forensic science and archeology, said she believes this application of multivariate statistics could bring benefits to forensics.

“It’s very exciting. She’s being putting samples at the O’Grady facility and looking at the degradation of those samples through time with the methods the Busch’s have developed,” Baker said. “It seems that it has potential to add to forensic science knowledge and it may be helpful in our forensic investigations, and so I look forward to their results.”