And now we have a return to hot sauce combat! When we last left off back in June, Race City Sauce Works Deadwood was duking it out Bonfatto’s Apple Pepper Jack Wing Sauce, with Deadwood winning the shootout.

The next Round One battle will have heavy hitter Heartbreaking Dawns 1498 Trinidad Scorpion taking on Jungle Heat Madness Sauce. Both spicy condiment makers have previously had dogs in the fight in this Ultimate Hot Sauce Showdown, but have not yet faced each other. These are two companies with potentially strong online fan bases, so it has the possibility of being another furious nailbiter of a bout. 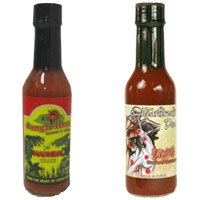 As always, the decision is YOURS, fiery foods fans! Vote NOW!

You have until the End of Day on

You can view the bracket as it currently stands
here.