Cheryl and Loren Hill, three-time qualifiers for the World Food Championships, also took home an additional $10,000 for winning the Barbeque qualifying category, as did the eight other finalists who won their qualifying category. More than $350,000 in cash and prizes was awarded through 38 competition rounds, making it one of the largest and richest food sport events in the world. 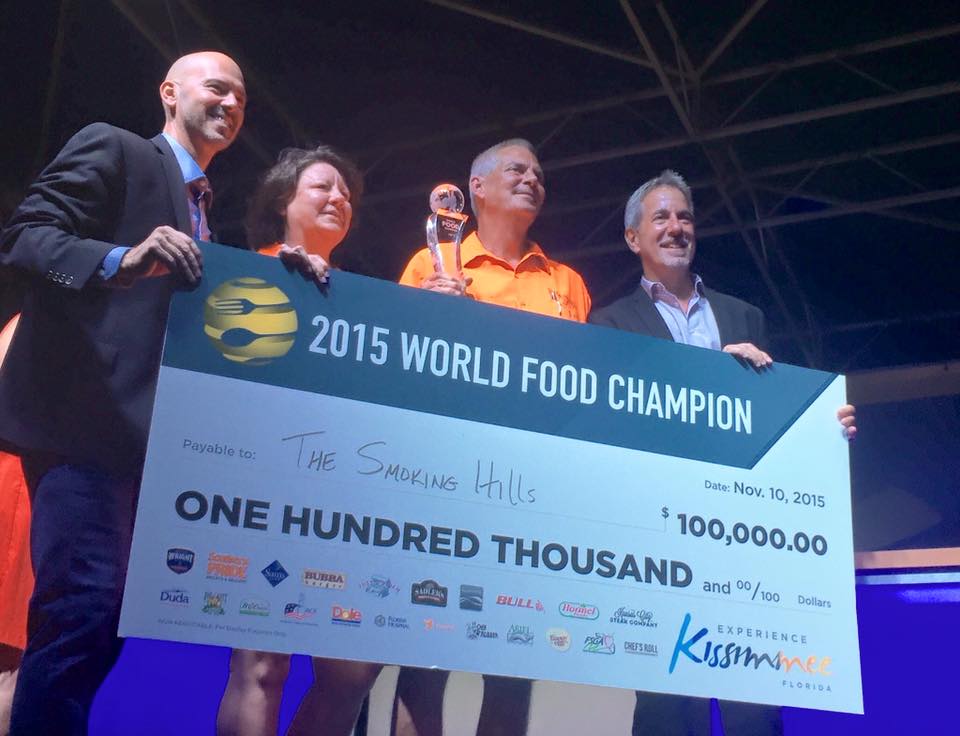 “This is so surreal. Normally I’d be a bawling mess but it hasn’t sunk in,” said Cheryl Hill, of “The Smoking Hills”, who has traveled the country with her husband on the Kansas City Barbeque Society competition circuit since 2007. They have won 16 barbecue championships, including the prestigious 2015 American Royal Invitational in Kansas City, Mo., last month.

Said Loren Hill:  “Everyone here says the minivan we travel to competitions in needs to be driven into the lake right there. It has 200,000 miles.”

The bulk of WFC’s food fights occurred in Kenmore Kitchen Arena, the largest outdoor kitchen in the world, measuring a full city block at 7,800-square feet. The space featured $250,000 worth of Kenmore branded stoves, cooktops, countertops and cookware – enough for 50 chefs to cook simultaneously. An additional $100,000 worth of professional grills from Bull Outdoor Products afforded open-flame grilling.

The fourth annual event drew champions from the biggest and best food competitions around the world into a single high-stakes culinary showdown. Cooking teams battled in nine classic categories to reward nine Food Sport champions, who advanced to WFC’s 2015 Final Table (in final order of their finish):

Tuesday’s competitors were scored with WFC’s unique EAT Methodology, which awards points for the Execution of a recipe, the Appearance of the presentation plate and the all-important aspect of Taste. A perfect score is 100. The scoring system levels the judging field so that dishes from different categories can be evaluated against one another, unique in the competitive Food Sport arena.

“As we’ve seen from past years, World Food Championships is a game changer and we’re expecting more great things from each competitor as their careers continue to unfold,” he noted.

About the World Food Championships

The World Food Championships (www.worldfoodchampionships.com) features hundreds of competitors seeking food fame and fortune in Kissimmee, Fla. for hundreds of thousands of dollars. Following a tournament-style format across multiple iconic food categories, the WFC culminates with a Final Table faceoff where category champions brave potential elimination in front of a live audience and a discerning panel of culinary judges. The World Food Championships is owned and produced by Nashville-based MMA Creative.