What is The Scoville Scale? 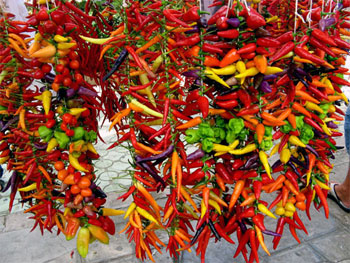 The Scoville Scale is used to measure the pungency or hotness of a chile pepper. The chemical compound found in chile peppers (from the genus capsicum) that gives this piquant heat is called capsaicin (the molecular formula is (CH3)2CHCH=CH(CH2)4
CONHCH2C6H3-4-(OH)-3-(OCH3) or simply C18H27NO3), and stimulates chemoreceptor nerve endings, especially in the mucous membranes. The number of Scoville Heat Units (SHU) in a pepper or hot sauce indicates the amount of capsaicin present.

While working for the Parke Davis Pharmaceutical Company in 1912, American chemist Wilbur Scoville devised a test for rating the pungency of chile peppers. His method is known as the Scoville Organoleptic Test.

In the Scoville Organoleptic Test, a pepper extract solution is diluted in sugar syrup until the extract’s “heat” is no longer detectable to a panel of (usually five) tasters. The degree of dilution determines where the pepper rates on the Scoville Scale. A sweet or bell pepper would have a Scoville rating of zero, since it contains no more than trace amounts of capsaicin and there is no heat detectable, even when it is undiluted. At the other end of the Scoville Scale, bhut jolokias (the current hottest chile peppers in the world) have a rating of approximately 1,000,000, indicating that their extract has to be diluted one million-fold before the capsaicin present is undetectable. Since it relies on human subjectivity, the Scoville Organoleptic Test can and has been shown to be inaccurate.

Wilbur Scoville tried many different methods and variations other than the one above to measure the pungency of chiles, but he found that the readings were not consistent and precise. He attempted to mix the chile pepper extract with different chemicals but was not successful at finding a more accurate solution. For decades the Scoville Organoleptic Test was the accepted way of measuring the amount of capsaicin in peppers.

Since the 1970s, chile pepper heat is now measured by what is called the Gillett Method (named after the chemist who applied it) which uses High Performance Liquid Chromatography (HPLC). This is a newer and more accurate method of quantitative analysis, and directly measures capsaicinoids and attempts to relate the measured concentration in parts per million (ppm) to the Scoville scale using a mathematical conversion factor of 15, 20 or 30 depending on the capsaicinoid.

This method yields results in ASTA pungency units. A measurement of one part capsaicin per million corresponds to about 15 Scoville Heat Units, and the published method says that ASTA pungency units can be multiplied by 15 and reported as Scoville Heat Units. This conversion is approximate, and spice experts Donna R. Tainter and Anthony T. Grenis say that there is consensus that it gives results about 20–40% lower than the original Scoville Organoleptic Test would have given.

Chart of the Scoville Scale

I’ve complied the largest Scoville Scale Chart on the internet of the hottest chile peppers and selected hot sauces. This has been assembled from sources and charts all over the web, and from many sauce manufacturers themselves. This chart would not be possible without the hard work, input and testing of others.

Please keep in mind that Scoville ratings are not perfect. Pungency values for any pepper or hot sauce, stated in Scoville Heat Units, can be imprecise, due to expected variation within a species. This can be due to seed lineage, climate, sunlight, humidity, and soil. For instance, a Red Savina Habanero, which can reach an upwards of 577,000 Scovile units in an almost perfect pepper-growing climate such as New Mexico, may only reach 200,000 to 300,000 SHU in the cooler, damper New Hampshire. The inaccuracies described in the measurement methods above also contribute to the imprecision of these values. When interpreting Scoville ratings, this should be kept in mind.

How hot is hot? The spiciness of chile peppers, sauces, salsas, hot rubs, peppered cheese, snack chips, and other “hot” foods is all subjective. What is absolutely mouth-scalding to one person may be mildly hot to someone more used to hot foods. If you’re a relative novice to the chile world, try to find something you have already tasted on the Scoville Scale Chart, such as Tabasco sauce or jalapeno peppers. If you find them mild, then you’re probably ready for the more intense pungency of hotter sauces and peppers. If they set your tongue on fire, then stick to the weaker foods that contain only a small hint of heat.

Flavor trumps pure heat. Also remember that more than anything the whole culinary experience with hot peppers and hot sauces is what kind of flavor they add and how they compliment your dishes, not how much pure heat they can possess. This is not a horse race or a contest; just because something rates high on the Scoville Scale doesn’t mean it’s better than lower heat counterparts.

What is The Scoville Scale?

3 thoughts on “What is The Scoville Scale?”