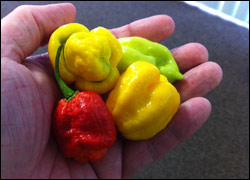 Below are the preliminary Scoville Heat Unit measurements for various super-hot chile peppers that grower Jim Duffy and capsaicin expert Marlin Bensinger tested late last year. Many of these were done both individually by Bensinger and after he submitted some chile pods to an independent, third-party lab, Analytical Food Labs in Grand Prairie, Texas.

As always, please keep in mind that the Scoville Heat Units listed are just estimates at best. Scoville units for each chile pepper may vary greatly due to the seed lineage, season, climate, soil, and other conditions in which the they are grown. In the case of the “newer” super-hot chiles such as the Trinidad Scorpion “Butch T” strain, organizations like the Chile Pepper Institute will grow the chiles for several more growing seasons in order to test for a more accurate average SHU rating.