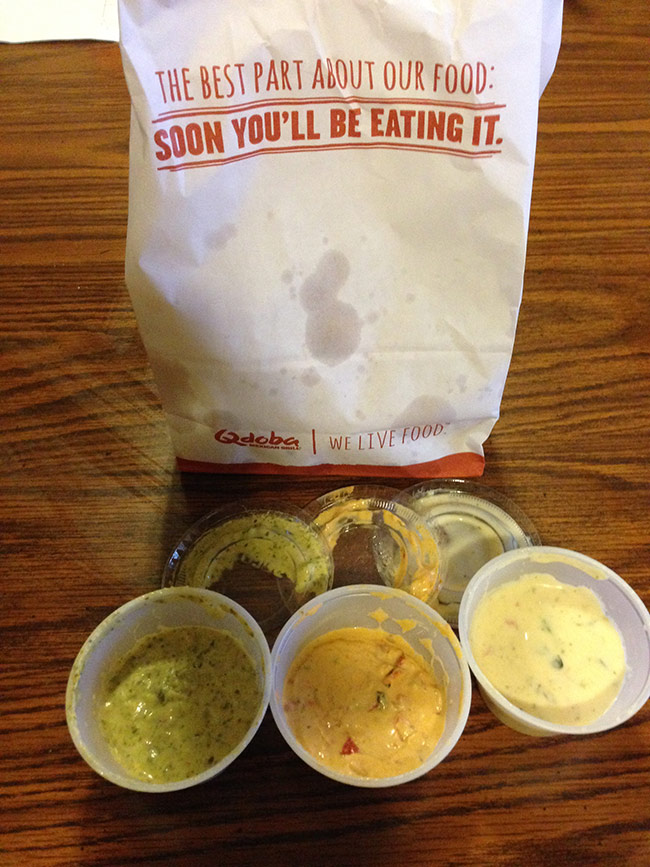 Qdoba, one of my favorite Mexican-style QSR chains, has had a winner in their long-standing 3-Cheese Queso. Now they are expanding their once singular liquid cheese offering into two new flavors based on burgeoning types of heat and taste profiles: Fiery Queso Diablo, a darker blend filled with jalapeños and smoky chipotles, and Zesty Queso Verde, a bright and herby Zesty Queso Verde. Do these upstarts get my thumbs up and delight my taste buds? Well, read on, fellow foodies…

Yes, it all started with their 3-Cheese Queso blend. There are a hundred spots online where you can concoct a recipe approximation of this guilty pleasure treat. Sure, it may be chock full o’ chemicals and preservatives, and may be as fattening as a tub of lard, but this stuff is something I’ve got to get in my belly at least a handful of times a year. It’s a smooth and light amalgamation of cheese, poblano peppers, diced tomatoes and cream without too much sweetness or richness that may be characterized by a queso dip produced by processed cheese food like Velveeta. I love this stuff.

And now for the variants of the the original.  The first is the Fiery Queso Diablo, one that fiery foods fans are probably most curious to find out if it’s worth fussing over.

It’s slightly chunkier and darker orange color than the 3-Cheese, and it’s also darker in flavor. As it is billed as having ” jalapeños and smoky chipotles”, it does take the attributes of that later pepper (for the uninitiated, by definition, a chipotle is a smoked jalapeño) by infusing the deeper, smokier, and more bitter tones of that chile.

I think that this is where they go slightly wrong with this. Really terrific smoked cheeses (even the chipotle variety) still retain the sweetness and sharpness of the base cheese, and the Fiery Queso Diablo loses this battle. Maybe they used the less-heavy and more delicate structure of the original 3-Cheese as it’s start?

Maybe you would love this, but I didn’t.  It could have benefited from a punchier and maybe slightly sweeter kick from the cheese and maybe a bit more fresh jalapeño to balance out the end result and make this a flavorful pleaser.

What’s the heat, you may be asking? It packs a minor punch – enough to sear the tongues of the general population, and enough to provide some warmth for the hardcore chileheads. On a spice scale from 1 to 5, it rates abound a 2.

Flavor-wise, it’s decent but not a “go-to” product for Qdoba.

There’s an unexpected (although rough-around-the-edges) gem on the Zesty Queso Verde cheese sauce. It’s a cool, sweet mix that is not common for a typical liquid queso dip. This is a green (duh!) tinted cheese that somewhat retains the taste of a nice cheddar blend but also has cooler peppery notes along with cilantro and lime.  The lime is fantastic, giving this a sweet lick and also a tiny tart edge. Cilantro – which I don’t like in huge amounts, but if used smartly can add all kinds of great, cool, herbal pizzazz to sauces, seasonings and dishes.

There’s not a lot of chile pepper spiciness to Zesty Queso Verde, but it more than makes up for it in scrumptious savoriness. If there is any downfall to this queso, is that it’s not versatile like the other two may be.  It really does not work as a dip for tortilla chips (both guacamole and regular queso work much better), so it’s usefulness lies mainly in being used as a complementary filler sauce for burritos (more on that below).

It’s a no-brainer that the Original 3-Cheese Queso is a home run with chips. Fiery Queso Diablo works somewhat in the same way, but needs to be punched up with more cheese flavor. Zesty Queso Verde fares better, and gives the sensations of both a good nacho cheese and a savory verde hot sauce, but is slightly less than the sum of its parts; it’s just too “odd” for mass snacking and doesn’t not have the addictability factor that makes you want to eat chip after chip after chip with the Zesty Queso Verde on them.

Qdoba offers a Queso Sampler with cups of all three cheese in smaller portioned cup and a sack of tortilla chips for the suggested retail price of $3.99.

What about on burritos? This is where the strengths and weaknesses become even more prominent… 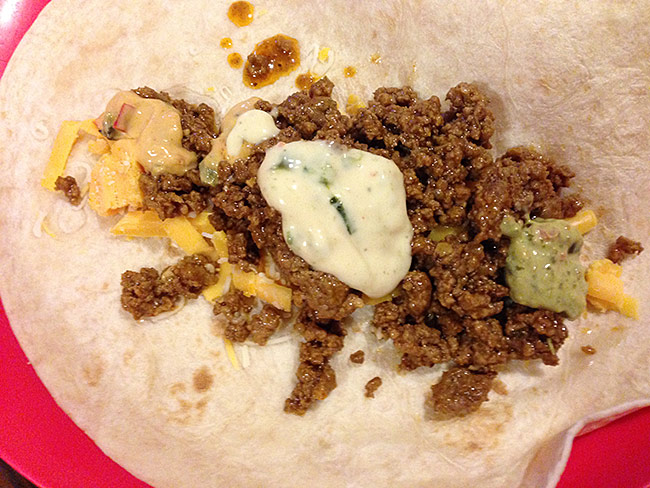 As pictured above, all three were tried on a seasoned beef burrito. After stumbling as a nacho dip, the Fiery Queso Diablo found some footing and harmonized better with the beef and shredded cheddar (perhaps it was the sharpness of the shredded cheese that knocked the deficiencies of Fiery Diablo back into focus). The previous taste champ 3-Cheese Queso was good and filled a supporting role with sauciness, moistness and a tangy back-end. The Zesty Queso Verde was really out of place, as I suspected the savory combo was not a good fit for the beef.

Next up was a grilled chicken burrito. Again, Fiery Queso Diablo came out stronger thanks to the other supporting ingredients and brought up my opinion of the overall taste a notch or two. Zesty Queso Verde found it’s true calling and did spectacularly as both a cheesy boast and as a complimentary player in the burrito’s flavor.

It’s great to see the big players in the food industry try new baseball swings like this, even if they don’t hit all the pitches.

All the usual phrases like “for a limited time only” and “local participation may vary” apply, so contact your local Qdoba for availability.