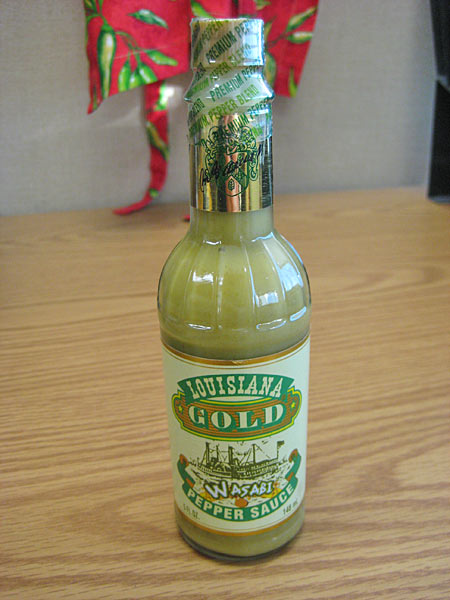 Here’s Round Two of analyzing the new Louisiana Gold Hot Sauce line. In the previous episode, I considered Red to be so-so with a pungent vinegar & salt pairing, and Green to lack heat but still have a delicious flavor. Now up to the plate is Louisiana Gold Wasabi Hot Sauce.

Now this is something I was both very eager and hesitant to test out. This is Bruce Foods’ (Louisiana Hot Sauce’s parent company) very first wasabi-infused food offering so the curiosity level was high in that regard. You don’t see the “big boys” – Louisiana, plus Tabasco, Frank’s, Crystal, et al. – exactly flooding the market with wasabi products, and Louisiana Hot Sauce.

But wasabi is something I rank up there with horseradish (the two are very similar, of course) – a food ingredient that I can consume in only sparingly small amounts. I like the minor pungency of wasabi on paste-covered dried peas and other Asian-style snacks. A dab here and there in select dishes is something I can also tolerate, albeit only occasionally. Every day or every week, though? My poor little palette couldn’t take it. Alas, in an effort to be an open-minded food-lover and objective reviewer, I’m willing to try most anything. As I like to say, there’s more to life than just white bread and ketchup. You never know if a variation will bring around your opinion on an item or at least shine a new light on it.

Okay, enough jibber-jabber; let’s get to the review!

Aroma:
4 out of 5. Smooth, sweet, vinegar, light mustard, light peppers. Fragrant and beautiful, and not strong as one might expect.

Texture and Appearance:
2.5 out of 5. More greenish-yellow than Louisiana Green Sauce, yet still very similar in pea-green color (that’s the vegetable pea, not the other one, you filthy-minded fool). Runny, but not see-through. Smooth and splashable. The consistency was good, the color left something to be desired.

Taste Straight Up:
This is no mere Louisiana-style pepper sauce. It’s as different to the Louisiana Original Hot Sauce as it is to barbecue sauce or teriyaki sauce. I’m pleasantly surprised with what I taste. First is the nearly-immediate tinge of vinegar, and then following behind by a few seconds was blast of bright, tart, hot flavors – the wasabi, peppers (the label does not mention what type, so I’m speculating it may be jalapenos due to the condiment’s greenish appearance) fusing with the vinegar. This tangy heat is definitely unexpected. No, it’s not going to compete with the latest mouth scorchers from Blair’s or CaJohn’s, but for a mainstream sauce it’s got pizazz.

Next up were hints of white wine and mustard. Several seconds after putting this on my tongue the sweet mustard flavor was starting to steal the spotlight as the dominant ingredient. The light amount of salt was balanced nicely with the rest of the other flavors. So far, so good, and ol’ Scotty was impressed.

Taste on Food:
5 out of 5. Grilled tilapia with green beans, Brussels sprouts and new potatoes was on the plate, and it was time to put Louisiana Gold Wasabi Hot Sauce to work. Wow! It was spot-on phenomenal. It provided a light, sweet touch and performed as a proper sauce should: it complimented the taste of the fish perfectly and got out of the way enough to let the terrific, mellow flavor of the seafood shine through. Wanna see a match made in heaven? It’s gotta be this! 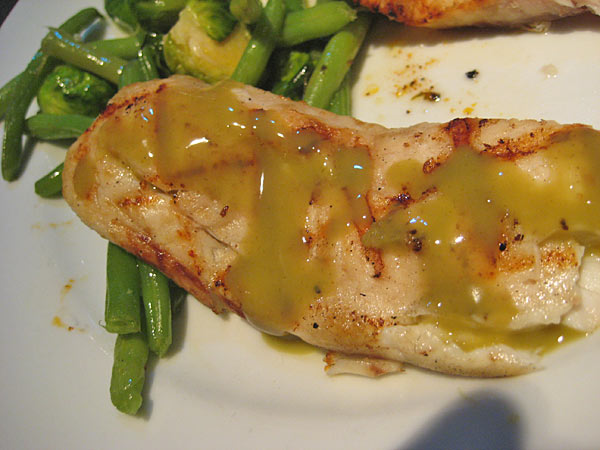 Heat:
The combo of wasabi, peppers and vinegar give it a seemingly strong jolt. Heat, whether it was perceived or real, is around 2 or 2.5 on a scale of 1 to 5, with 5 being a nuclear bomb blast. This is the spiciest thing I’ve had from Louisiana brand.

Label:
Classy, but this is too close to the Louisiana Gold Green Pepper Sauce in appearance. From the sauce color to the label color, it would be extremely easy to mistake one for the other. Only if you study each intently will you notice the subtle differences.

Overall:
For a major brand that’s in most grocery stores in America, I’m duly impressed. At around $3.00 for a five-ounce bottle Louisiana Gold Wasabi Hot Sauce is a steal. If you can’t find it in your neck of the woods, you can go to the Bruce Foods online store to score this one or the other sauces in the Louisiana Gold line.

Up ahead, Louisiana Gold Horseradish Sauce…