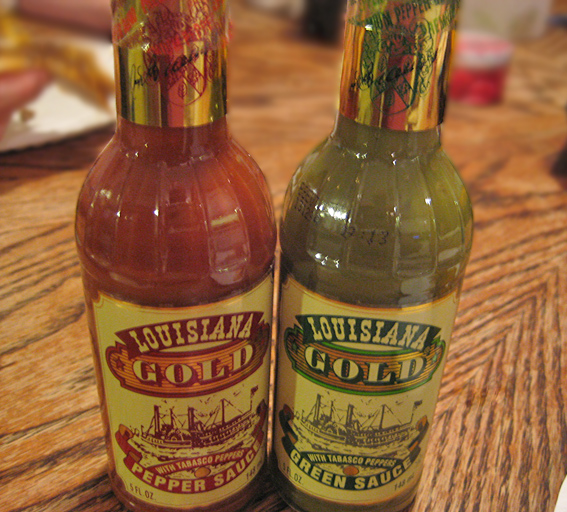 I wouldn’t be going out on a limb to say that the vast majority of foodies are well familiar with Louisiana “The Original” Hot Sauce, as would be a large bulk of the American populace. For over 80 years the Bruce Foods corporation has been churning out the product, which easily stands amongst Crystal Hot Sauce, Texas Pete, Tabasco and Frank’s Red Hot as historical biggies of American pepper sauce (for those of you interested in learning more about the historical record, look at Chuck Evans’ exhaustive treatise on Louisiana pepper sauce). At the request of Louisiana chefs, Bruce Foods has opted to introduce a premium lineup of sauces loosely based on their original condiments but with smoother, richer properties. They’ve dubbed these as their Louisiana Gold sauces, and the offerings are Louisiana Gold Red Pepper Sauce, Louisiana Gold Green Pepper, Louisiana Gold Horseradish Sauce and Louisiana Gold Wasabi Pepper Sauce, which are available separately or as part of convenient 4 bottle gift pack. The eager beaver I am, I was hoppin’ to test all of these out, so I had requested of Bruce Foods that they send all four flavors for me to indulge in (thanks guys!).

I’ll split the review into two parts. This time out, I’ll cover the Red and Green Sauces, and next time out I’ll be taking the horseradish and wasabi versions for a spin.

As you can tell, both of these selections differ from their classic Louisiana Hot Sauce and Louisiana Jalapeno Hot Sauce counterparts by the presence of tabasco peppers and spirit vinegar. Tabasco chiles have a slightly more “harsh” taste profile than lone cayennes. Spirit vinegar is processed from cane sugar, is more acidic than other forms of vinegar and contains minute amounts of alcohol. This gives it a different flavor profile (which I’ll get to in a moment).

Aroma:
3 out of 5. Red: Strong vinegar and salt, but smoother than The Original with that duel pepper onslaught.
Green: Although the vinegar and salt are still there, they’re competed against by the jalapenos with a duller, smoother fragrance.

Appearance and Texture:
4 out of 5. Even though both versions are still on the runnier side of the viscosity scale, these are much thicker than a normal, watery Gulf-originated pepper sauce. The opening of the bottle still has a smaller flow restrictor-type end. I found that several violent shakes are necessary to get any decent amount of sauce out.

As you can see in the photo, both the Red and Green contain even body and heft to be sort of “clumpy”. What looks like a watery or “oily” edge surrounding the puddles of sauce are not from the sauce itself, but from the paper plate absorbing the moisture.

The Gold sauces certainly look better, but are they as superior in the taste department?

Taste Straight Up:
Red: 3 out of 5. I think it’s an improvement over The Original, but it’s still a bit too pungent for my tastes thanks to the strong salt and vinegar. I do admittedly have to give them a thumbs up for making a smoother, more flavorful chile sauce. It you think that Louisiana brand Hot Sauce is only “pepper-colored vinegar”, then give this a try.

Green: 4 out of 5. This stuff I can imagine eating directly from the bottle. Strange to say that. Why? Because This may be somewhat less versatile on foods than the Red sauce would be. Nonetheless, I liked the flavor. The jalapenos and tabasco peppers really jumped out and were complimented well by the spirit vinegar and the salt. You want balance of ingredients in a Louisiana-style pepper sauce? Look no further than this.

Taste on Food:
A taco pizza is usually a good gauge for any all-purpose spicy condiment. I gave pieces of the homemade Mexican pizza healthy doses of each sauce. The verdict? I liked the Green more – a lot more. While I appreciated the richer flavor, the Red was simply to salty and tart to give it a glowingly positive review. It was only moderately decent. 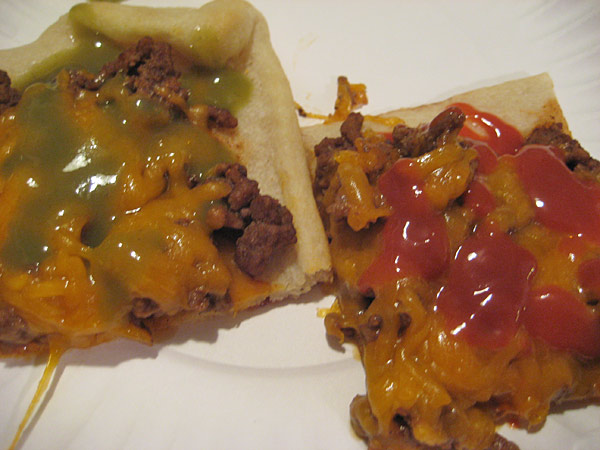 What’s my suggestion? Use the Red Sauce on seafood, where I think it would excel in smaller amounts. Mix it in with melted butter to make a killer buffalo wing sauce. Jambalaya and gumbo would be good, also.

Green is fine for what it does, but outside of the Mexican food realm it may be quite limited. That’s okay, though; I’d still highly recommend it.

Heat:
In addition to being more complex and flavorful, the Gold line of sauces also aim to be a touch hotter. The Original Red rates in between 1,000 to 2,000 SHU, while the newer Louisiana Gold Red Pepper Sauce has been tested as being around 1,500 – 3,000. Louisiana Gold Green Pepper Sauce clocks in between 600 to 1,200 SHU, lower and milder due to its jalapeno pepper content. Milder hot sauce fans shouldn’t have any issues with the heat, though. Hardcore chileheads might feel a slight tanginess and would use these as flavoring, not heat inducers.

Labels:
4.5 out of 5. The labels are both classy and classic. I love the use of the gold (and with “Gold” in the name it would be a gyp not to include it), the sharp fonts and the sketch of a Mississippi steam boat. A big improvement over Louisiana’s older yellow labels, and there’s certainly no mistaking either for one another.

Bottom Line:
Try ’em out for a heartier, livelier flavor. In your next recipe that calls for a Tabasco-style sauce, use one of these and see how it works out for you.

The Gold lineup should be available everywhere. If you can’t obtain their at your local grocery store, there are a thousand and one destinations online that stock these. Both Red and Green can be purchased in 2oz and 5oz bottles, and the Red in a 12oz. container.

One thought on “Review – Louisiana Gold Pepper Sauces, Part One – Red and Green”