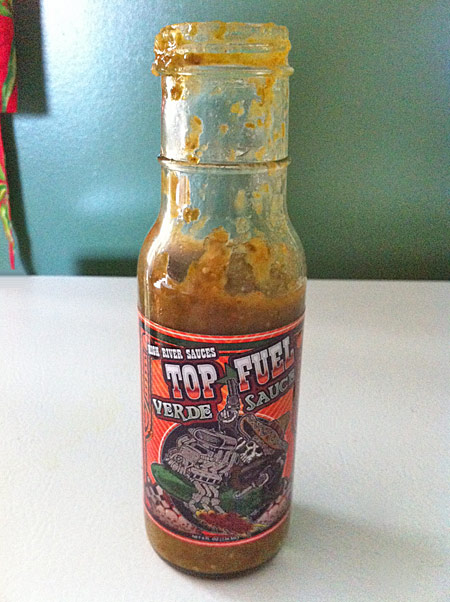 This product is the brainchild of Steve Seabury of High River Sauces (I had previously reviewed his Tears of the Sun Hot Sauce and Hellacious Hot Sauce), Ratt lead singer Stephen Pearcy, and Chef Chris Santos. Seabury has hit pay-dirt with the aforementioned condiments so I was excited to put his latest, High River Sauces Top Fuel Verde Sauce, out on the culinary race track.

There at times are products that have somewhat of an identity crisis. Whether intentional or not, a sauce may be marketed or is implied to be for a particular usage but in reality may be better as something else. I find that in the case of Top Fuel Verde Sauce. When I think of a “verde sauce,” visions of Mexican spin in my head. Yet this is NOT good for South-of-the-border fare.

Let me explain briefly that this sauce contains olive oil. Any number of varying types of oil in a pepper sauce are generally considered to be odd at best, and at worst forms an off-putting flavor and texture dynamic. There are a couple of well-known chileheads out there who have already expressed their displeasure with Top Fuel Verde Sauce because of that (and I’ll let them identify themselves if they chose), yet I think this sauce works if used with the right food. What is High River Sauces Top Fuel Verde Sauce suitable for? More on that later in the review…

Aroma:
2.5 out of 5. What hit me upon smelling this is a strange mixture of oil, poblanos and cilantro. Interesting, but not exactly mouth-watering.

Appearance and Texture:
3.5 out of 5. I really like this sauce in this regard. It’s consistency is uniform all throughout, and is thick and chunky, yet smooth (the last characteristic due to the nature of olive oil blend). It adheres brilliantly to food, and reminds me of a nice green salsa.

Taste Straight Up:
2 out of 5. Here’s the kicker: Top Fuel is really not that good by itself. In fact, the more I ate, the more the flavor got to me…and not in a pretty way.

I got a good dose of green chile pepper and tomatillo mixture right at the onset, with a touch of garlic and cilantro, but the nagging presence of the oil deterred me. It’s almost like it built up a shield in the form of a weird film on my tongue. Too much “coating” action! Sorry, but this did not impress me.

For those of you who by this product – don’t try it directly! It might turn you off. Instead, use it like I prescribe below. Now read on…

Now for the little matter of how this tastes when applied to Mexican. Commonly around the Roberts household, I will whip up seasoned beef, refried beans, shredded cheese, veggies, and a myriad of other edible accoutrements along with soft tortillas, hard taco shells and nacho tortilla chips, and let the dinner patrons decide how to load up their plates. I chose a burrito at first and drizzled some Top Fuel on. Although it wasn’t outlandishly horrible, it did not go well with it. Each subsequent bite made the oil taste more pronounced. A crunchy taco produced similar unpleasant results. 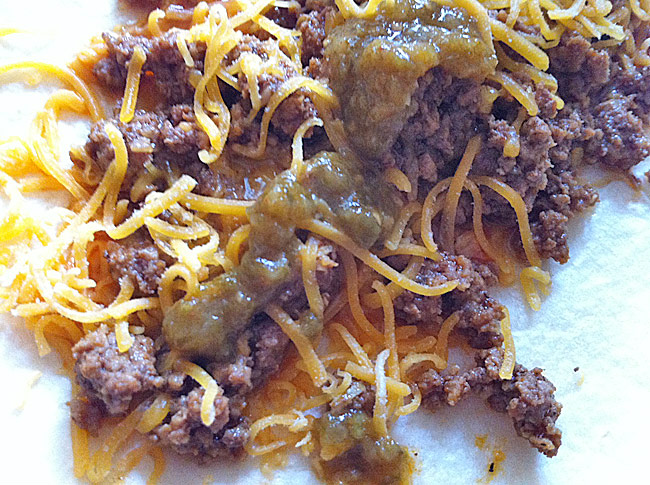 A big disappointment with Mexican

“There just had to be something that this works with”, I tried to reason with myself. A few days later I marinaded some chicken and pork chops in Top Fuel, and then threw them on the grill. When they were done, I poured a bit more sauce on top and BINGO! Now we’re talkin’ good eatin’! The slight char developed on the fillets in concert with the natural juices from the meat provided an excellent vessel on which the pepper, garlic, cilantro and oil flavors were allowed to do their magic. THIS is what Top Fuel was made for. 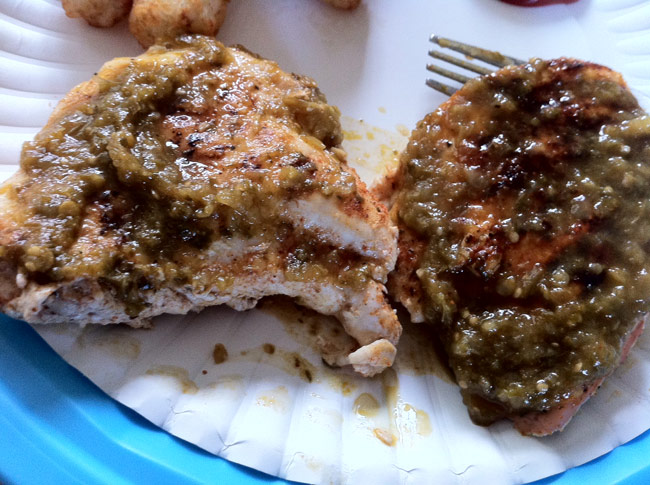 Another day or two later I had some leftover fettuccine alfredo with grilled chicken breast chunks. Another solid winner, as the peppery and oily tones complimented the Italian food spectacularly.

Heat:
1.5 out of 5. Not much burn to speak of here. The flavor of the sauce does the talking.

Label:
4.5 out of 5. A blazing cacophony of colors, and the crazy artwork of the jalapeno-riding bandito was top-notch. Love it!

Get yourself a bottle of High River Sauces Top Fuel Verde Sauce if you’re looking for a nice flavor enhancer to Italian food or an array of grilled meats. Those are what this sauce is geared for. You can get the goods at highriverssauces.com and pick up an 8 oz bottle for $6.99 plus shipping.