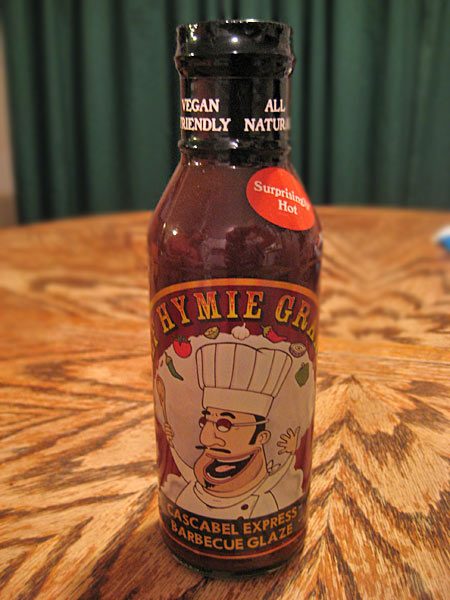 Different is good. Well, more specifically, different can be desirable if a sauce recipe is inspired and smacks down artificially-created walls and conventions even if the item isn’t necessarily a 5 out of 5 stars on taste.

On this subject, Chef Hymie Grande’ (real name Jamie Faitelson) is someone who has got to applauded for his exploratory spirit. He seems like someone who is bored with tedium in foods and will jump at the chance to interject the bizarre and the unconventional. While I love regular barbecue sauces, I was genuinely excited to see his take on the genre of condiments.

The Chef also has additional “separate from the rest of the pack” clout going for him even more because Cascabel Express Barbecue Glaze (and his other two condiments) are first BBQ sauces to carry the American Diabetes Association mark on the bottles’ labels, as they meet the stringent ADA specifications. Cascabel Express is also vegan-friendly, all natural, and contain no high-fructose corn syrup or processed sugar.

With all of these attributes, if Chef Hymie Grande’ could pull this off as a delicious taste-bud pleaser, he would have one hell of a unique product on his hands. Unfortunately, I think this sauce misses the mark on flavor. It does it just barely, but it still misses enough for me not to give this a raving thumbs up.

Aroma:
2.5 out of 5. Deep, dark and full of spicy complexity. First off, a really rich lager vapor hit my nose. I’m not sure what kind of beer was used in the sauce; it could have been a watered-down domestic like Busch, but it sure didn’t smell that way. Then there was a weird carnival of chile peppers, sweet tomatoes and spices zipping about. The tiniest hints of a jerk sauce, an adobo paste and an oniony ketchup interplayed…this was a hard one to nail.

Appearance and Texture:
3 out of 5. This one is nice and brown, consisting of pulpy, pasty remnants of tomatoes and chiles. Spices and flecks of ingredients abound in this mix. Overall, this is the opposite of sticky, gooey and syrupy and is more like a runny brown ketchup. 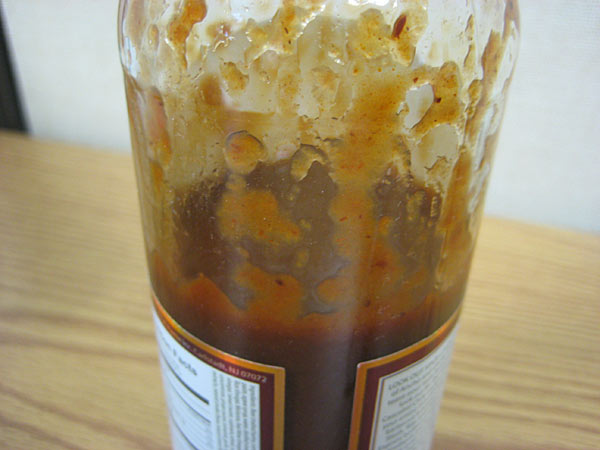 Taste Straight Up:
2.5 out of 5. More complexity and a mishmash of styles attempting to coalesce but not quite accomplishing that task. Sweetness, onions and pepper hit my tongue first, with heat coming up the rear only a second later, and then other sensations like Worcestershire sauce following soon afterwards. I could tell a good sauce was in here somewhere, but where? It certainly didn’t lack sweetness or a lovely medium punch from chile peppers. There was just something that made this taste off-kilter, and perhaps it was a funny beer/onion hybrid flavor.

Taste with Food:
3 out of 5. I marinaded a chicken breast in a Ziploc bag full of Cascabel Express for a few hours in the icebox. Since I didn’t feel like breaking out the charcoal for the grill (this past Saturday morning was relatively warm outside with temperatures in the mid-40s, but I was feeling lazy), so I decided to cook it on the stove.

When the chicken was done, I poured a little more Cascabel Express Barbecue Glaze on top before I dug in. 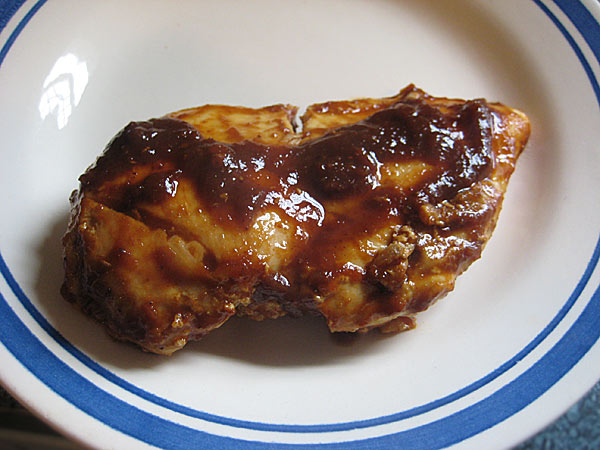 It turned out a bit better than tasting Cascabel Express by itself, most likely due to some of the alcohol evaporating during cooking. Just so you know where I’m going from, I’m certainly not opposed to using wine, beer or any other alcohol during cooking. If used right, it can really add an excellent burst of flavor to dishes. Hell, when I was growing up, my dad would frequently add beer to his barbecue sauces, so I got used to the strong, bitter taste of alcohol when eating grilled meats from the backyard.

The small amount of natural tomato flavor, in concert with the chile peppers, garlic and onions “disappeared” a smidgen more into the meat and was rarely overpowering. Some of the chile heat was prevalent so overall it was a decent base for the meat.

Heat:
2 out of 5, with 1 being mild and 5 being nuclear heat. With a sticker attached to the bottle that states “Surprisingly Hot”, mild mouths will now that they’re in store for something that will warm their tongues. Chileheads won’t find it much of a challenge to their heat tolerances, but it doesn’t matter as this strikes the delicate balance between being too mellow for flame fans and being too scorching for those who can’t take much spiciness. I’ll give Chef Hymie Grande’ points for being able to hone in on this sweet zone.

Label:
5 out of 5. Very sleek and eye-catching. From the elements of shiny, metallic trim to the goofy cartoon drawing of a veggie-juggling chef, this one’s a winner.

Overall:
I was straddling the razor-thin line between liking and not caring for this product, and I feel like I’m millimeters on the later side. If this sauce were a hair better, I would whole-heartedly recommend Cascabel Express Barbecue Glaze.

However if you or someone in your family is a diabetic, you may want to give this sauce a spin and see if you perhaps find it more pleasing than I did.

Purchase this or one of Chef Hymie Grande’s other sauce at http://www.chefhymiegrande.com/products.htm.