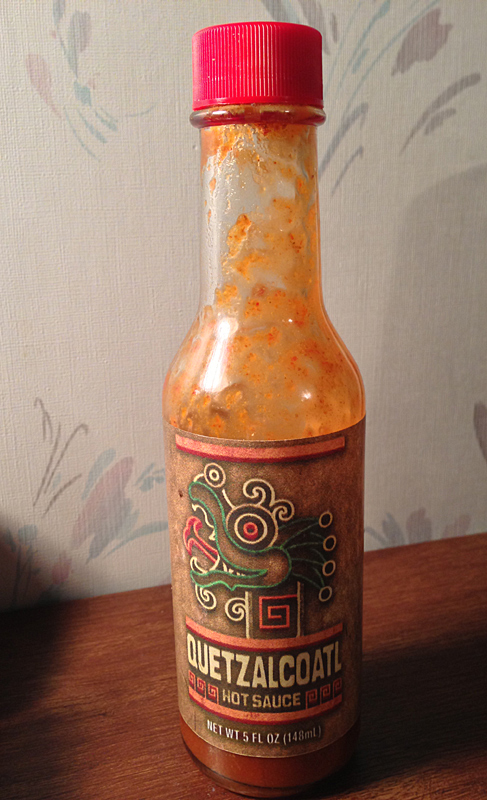 In an already outstanding year in the hot sauce world, leave it to CaJohn’s Fiery Foods to keep the already-raised bar up to stratospheric levels. As unequivocally one of the best spicy food product makers in history, CaJohn’s continues to push the envelope each and every year, very often releasing sauces that deservedly are put into the running for best new product of the year. It is no different for 2012 with their new Quetzalcoatl Hot Sauce.

CaJohn’s has taken the basic recipe for their awesome Mexican-style sauce, Oaxacan Hot Sauce, and kicked up with some furious ghost pepper power, and made Quetzalcoatl a must-have for those craving some south-of-the-border delights. And, like Oaxacan (John “CaJohn” Hard pronounces it “wuh-HOCK-en”), Quetzalcoatl is another name of Mesoamerican origin that’s hard to pronounce. On the interwebs, you’ll find a half dozen differing ways to say the name, but perhaps the closest one to what it actually might be is “KETS-ull-KOHT-uhl”. Fellow blogger Al “Buudah” Goldenberg has scrapped any attempts at the correct pronunciation and humorously dubbed this hot sauce “pretzel-coat”.

Aroma:
4.5 out of 5. Smooth Mexican and Southwest tones, predominantly from the cumin with a tab of little onion and chile pepper scents.

Appearance and Texture:
4 out of 5. This one’s in the medium section of the viscosity scale. It could have been thickened up just a touch more pulp in my opinion, but at least it’s not cayenne pepper sauce-level thin. CaJohn’s Quetzalcoatl Hot Sauce a lovely deep orange-brown hue with most of the tiny shreds of ingredients blended up pretty well.

Taste Straight Up:
5 out of 5. Like the milder Oaxacan, one taste of this screams “taco seasoning!”, and I mean in that in the best possible way. Cumin is strong, like in any good basic seasoned beef or chili (as in chili con carne the dish, NOT chile pepper) mix, with worthy supporting roles from onions, garlic, vinegar and the serranos and bhut jolokias. I was also surprised that there is an underlying base of sweetness as well that at no point ever becomes odd or out of place. Some nice, searing heat comes up from behind rather quickly, making this a winner for those who love a comfortable burn. The whole harmonization of fire and flavor just flat-out works and is exceptionally amazing.

Taste on Food:
5 out of 5. Anything your little heart desires when it comes to southwest and Mexican dishes, this hot sauce excels! I don’t have to give a laundry list of foods on which you could douse generous amounts of Quetzalcoatl, but this product is now a mainstay for any Mexican dinner nights at Casa Del Roberts. It’s wonderful on everything. One such crowd pleaser (well, it was a crowd of one, as my two boys won’t regularly consume anything this hot) was a homemade taco burger, with seasoned beef, refried beans and shredded cheddar on a toasted bun. Amazing! I’ll take another three of these! 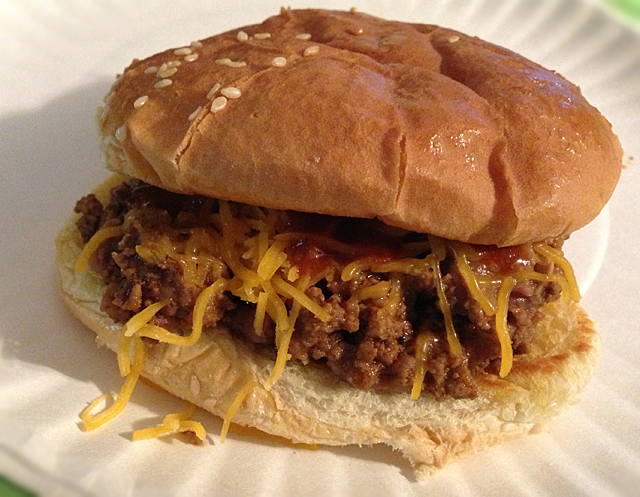 Heat:
3.5 out of 5. If you’re a hardcore chilehead, then CaJohn’s Quetzalcoatl Hot Sauce is nestled perfectly in the range of an everyday table sauce for you. Those of you with mild mouths will find the back-end burn good n’ furious, perhaps maybe a touch too spicy for you. For me, it was dead-ass on target.

Label:
3.5 out of 5. It’s adorned with Mesoamerican-inspired artwork which gives it the right “feel”. However, the weak aspect of this is that any unlearned person walking into a hot sauce shop may not know what this sauce is all about. They’ll see what to them is an unpronounceable name; and with no explanation on the label on what it’s about (all the bottle has is the ingredients list and the CaJohn’s company info), they might pass this over and pick up another lesser sauce instead.

Brilliant, balanced stuff from CaJohn’s Fiery Foods. This is instantly in my top 20 or 30 sauces of all time, and has surpassed the aforementioned Oaxacan in my opinion. My bottles I purchased at this year’s Weekend of Fire (where us bloggers awarded this our “Best New Product” of the show) are almost used up. Quetzalcoatl Hot Sauce gets my highest recommendation.