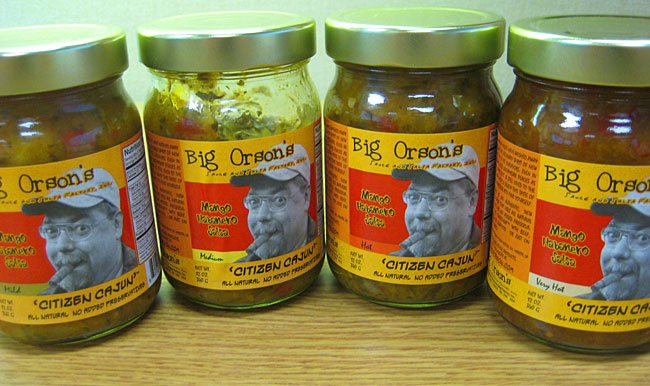 This review was a long, LONG time coming. The genesis was actually about one year ago when Big Orson’s submitted the Hot and Extra Hot versions of their patented Citizen Cajun Mango Habanero Salsas for the chilehead bloggers contest that culminated at last year’s Weekend of Fire hot sauce show in August. I was impressed with their usage of sweet components and de-emphasizing the tomato (the later of which is what most people in America envision when they hear the word “salsa”) in their one-of-a-kind, chunky blends. Big Orson’s did very well in the aforementioned contest – the Hot variation claimed the Second Place slot out of roughly thirty entries, remarkable for an unconventional, dessert-type salsa – and put them on the radar for many online pepper fans. When it came to me doing a review…well, as determined as my intentions were, I just simply never got around to doing one.

Flash forward several months later. Big Orson’s owner and president Jason Clabaugh shipped to me all four types in his Citizen Cajun line – Mild, Medium, Hot and Extra Hot. It provided me a second chance to tell you all about these unique products, and I’m not about to waste the opportunity this time.

Let’s take a look at the labels. They’re bright and colorful with a melange of yellow, orange and red, and would certainly catch one’s attention if this were sitting upon a store shelf. I have to knock off a point for not having the four versions more distinct. Although zoomed in on the photos below, it’s easy to miss where each one gives the heat level when viewing these from a normal distance. 4 our of 5.

Mostly the same components in all four, just mainly differing in the amounts or in the order in which they’re listed.

3 out of 5. All four have a very agreeable scent. The base of all of the aromas is a mild fruit-like presence, which is easy to guess is brought on by the mangoes and to a lesser extent by ginger and tomatoes. As the heat level increases, so do the sharper notes from the garlic, habaneros, cilantro and salt.

4 out of 5. Wonderfully chunky while remaining easily scoop-able and spreadable with a lot of thick liquid resting between the hunks of ingredients. You can visibly see pieces of onions, mangoes, red peppers and large flecks of cilantro. The color is mostly a lovely yellow cast with a tinge of orange, but the Very Hot is different than the others by having a much more pronounced brown hue (perhaps due to the increased amounts of habanero powder?). 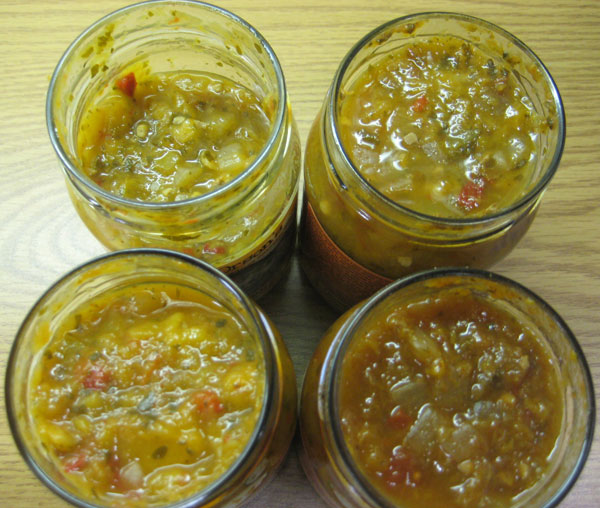 Clockwise from the bottom-left: Mild, Medium, Hot and Very Hot 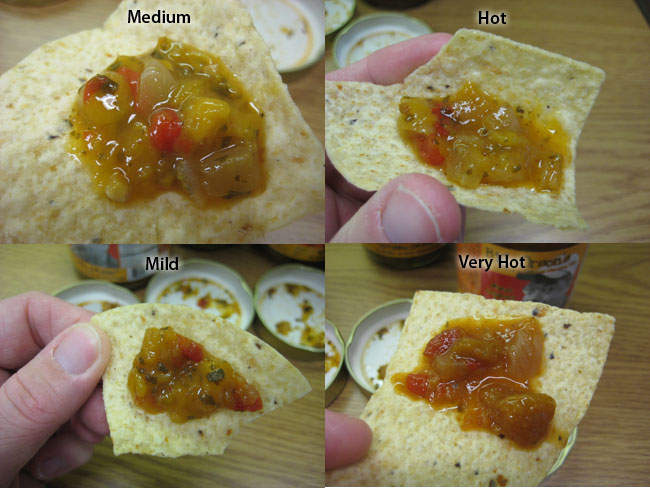 Let’s break this down one by one…

Citizen Cajun Mild: 4 out of 5. A subdued brilliance. I’ve tested out a great deal of sweet or fruity salsas and chutneys, and this puppy is unique (that may be a word I overuse in this review). Other salsas taste like weak, watery and mushy components plopped in a jar, Citizen Cajun Mild has loads of smooth, fresh personality. The core flavor is a magnificent balance of mangoes, bell peppers and tomatoes, but possesses lots of high notes from ginger and cilantro. The later two components could easily be overused but I think Big Orson’s has struck a nice balance and overall it’s an easygoing and sweet blend people would be highly surprised with. Speaking of surprised, this stuff has considerable residual heat and a large amount will warm up your tongue slightly.

Bottom line: recommended who love flavor but not stinging heat.

Citizen Cajun Medium: 3 out of 5. Much like the Mild yet has amped up quantities of cilantro, ginger, lime and garlic, giving Medium a brighter, tarter and more pungent taste. There is also a tough more heat, but not enough in proportion to the other pieces of the ingredient puzzle. It was a bit too strong when it came to ginger and cilantro and therefore had a slightly off-kilter quality.

Bottom line: very “Asian” in presence, but I don’t think there was enough sweet and spicy to push this into “killer salsa” territory.

Citizen Cajun Hot: 4.5 out of 5. NOW we’re talkin’. This is the salsa I fell in love with nearly a year ago and it was great to revisit an old flame (no pun intended). The deficiency loose ends Medium had are almost all wrapped up neatly by this Hot variation. There’s unmistakable boldness of ginger and cilantro but there is also enough heat to keep the see-saw from tipping over to only one side in the whirlwind of flavors. Fruity and savory with a hefty burn (about 2.5 on a heat scale of 1 to 5).

Bottom line: Great stuff. If you’re dying for something new from the salsa world, this is it.

Citizen Cajun Very Hot: 4 out of 5. The increased flamage once again makes this lose the delicate balance but thankfully not as much as the Medium did in comparison to the Mild. Citizen Cajun Very Hot uses its habanero powder to great advantage and ups the heat blast to a 3 on a 1 to 5 scale (this approaches chilehead-only land). Good tastes abound with luscious sweet mango tones and zesty ginger.

Bottom line: Worthy enough if you’re craving a minor volcanic blast from a salsa that’s drenched with flavor and sweetness.

All are palatable to use simply as a dip for tortilla chips, despite their offbeat piquancy. Citizen Cajun has an allure that would make it suitable as a glaze or as a post-cook topping for chicken, ribs or fish.

The Mild and Hot offerings are the best, with Very Hot not too far behind. With the exception of the Medium, these are all dynamite products from a top-notch salsa company. A 12 oz. jar of any one of the four heat levels is available for $6.99 at http://www.bigorson.com.