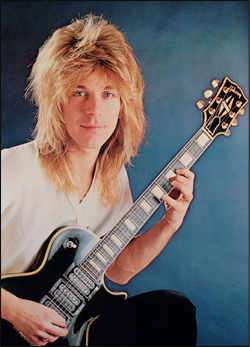 Many people know me as a huge Eddie Van Halen fanatic, with him influencing me both as a guitarist and as a non-musician (I at one point maintained three different VH websites – VHTrading.com. VHFAQ.com and VHGuitar.com).

Yet for a while there was someone else who inspired my playing just as much as Eddie. That person was the late, great Randy Rhoads.

For those of you unfamiliar with the story, here’s the condensed version. Randy cut his teeth at his mother’s music school while playing in the local L.A. music scene in the late 1970s. He was a founding member of Quiet Riot, and left that band after ripping out two albums with them (and long before they recorded their multi-platinum 1983 breakthrough Metal Health) to join Ozzy Osbourne’s new solo outfit after he departed Black Sabbath in 1979. Randy became Ozzy’s main man and songwriting partner, and together they forged instant metal masterpieces in the early ’80s with Blizzard of Ozz and Diary of a Madman. Both of these records, with help of Van Halen’s early material, created a blueprint of what guitar-dominated hard rock would be for the next 10 years…

During the tour to support Ozzy’s second album in 1982, Randy took his famous frontman partner aside and expressed interest in eventually quitting the band to pursue more classical studies to expand his vocabulary as a musician. Mr. Rhoads had a deep love and unwavering commitment to music, and was always looking for ways to improve himself. Mere days later, Randy, along with the group’s hairdresser and bus driver/pilot, were making mock diving runs with a borrowed airplane at the band’s tour bus (where Ozzy, and the rest of his band and crew were at the time) while in Florida and crashed. All three were killed instantly. Randy was only 25.

We’ll never know what Randy would have accomplished if he were still here on this planet. We all know of of his kickass riffing on “Crazy Train”, his classically-derived super solos on “Mr. Crowley”, his acoustic tenderness displayed on “Dee” (written for his mother, Delores Rhoads), and his extended “play until we run out of tape” soloing on a handful of his Diary of a Madman tracks. The two Ozzy albums, with output with Quiet Riot, plus a handful of outtakes, are the only things we are left with that contains his budding virtuosity.

After I got my first guitar at age 14, I cut my teeth on Van Halen’s Live Without a Net, plus many other offerings from metal and classic rock six string wizards from the previous 20 years. But then the metal world got news of an upcoming live album that Ozzy would release featuring his late guitarist called Tribute. I remember travelling up to Camelot Music in the old Crestwood Mall in Crestwood, Missouri that day in 1987 when this release came out, and then taking the cassette home and completely immersing myself in Randy’s playing. I would take my micro-cassette player and record little snippets from Tribute, playing them back at half-speed to teach myself the ins and outs of his solos and riffs.

I learned a gargantuan amount about minor scales and music theory this way because Randy’s playing wasn’t merely random fast notes, but clearly rooted in well-though-out musical knowledge and impeccable and cutting-edge techniques. Add to that the incredible emotion and feeling Randy put into every ounce of his guitar acrobatics, plus bucket-loads of ferocity and energy, and you have overwhelming evidence of him being one of the major new axemen to come along in the post-Clapton/Page/Beck era of rock guitar.

Both Van Halen and Rhoads were my two guys early on. I had numerous posters adorning my walls as a teenager, including one of Randy with the exact picture above, which was right over my bed. It brings back so many memories just looking at it.

Even though I don’t pick up my guitar much any more, I still “feel” a little bit of Randy in my playing. So what more can I say? It’s unbelievable to think that it’s been 30 years today since he died. Today, while my heart feels a little heavier, it will also celebrate the legacy of truly one of the most talented rock musicians ever to have graced this world. R.I.P. In the words of his former band mates Quiet Riot: Fly on, Thunderbird fly…