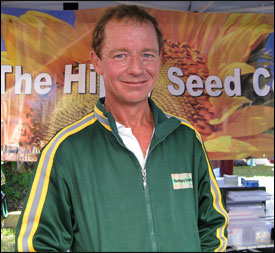 Based out of Ettalong Beach, New South Wales, Australia (approximately one hour north of Sydney), Neil Smith of The Hippy Seed Company is known for breeding and selling chilli pepper plants, seeds and powders, which include some of the hottest capsicum varieties in the world, such as the hallowed Naga/Bhut Jolokia. He’s recently began developing sauces, which by some reports produce an mouth-numbing burn that hardcore heat freaks would love and a taste foodies would admire.

Neil is probably gained the most notoriety for doing his on-camera Chilli Tests and Chilli Sauce Tests on his YouTube channel. He’s bravely consumed everything from the ultra-nuclear Trinidad Scorpion chilli pepper to some of the world’s hottest natural and extract sauces while providing the global video viewing audience his reactions and thoughts. With this unique angle, Neil is quickly becoming one of the most well-known – and entertaining – reviewers of fiery eats.

As a side note, in honor of the Aussies (and everyone else in the English-speaking world outside of North America), I’ve ditched the Western Hemisphere spelling of “chile” in this post in favor of “chilli”.;-) Cheers!

Scott: What are the origins of The Hippy Seed Company?

Neil: I started Peninsula Lawnmowing in 1998 and was always in peoples’ gardens, so I started taking cuttings and I was given plants by my customers. As a hobby I built a little website and had a few non hot types of chillis and capsicums. I put some seeds of the plants I grew on there thinking I would make a few dollars to buy more plants, but no one bought any at first, though. But I added more as I thought that one day something may happen and I just wanted to play with plants.

Scott: Where did the name “The Hippy Seed Company” come from?

Neil: Being a hippy-type of person, I was originally going to sell other kinds of seeds that aren’t legal and the name popped into my head one day and liked it so the idea was started. I never got into those kinds of seeds though, but for the first five years I was constantly asked and had to keep telling people “no, I don’t do that” and still occasionally I get asked for illegal things. But I’m not into that and don’t even smoke now or even drink.

Scott: What are all of the products that The Hippy Seed Company provides?

Neil: At the moment, it’s chilli seeds and a range of 3 sauces, as I’m sold out of everything else as the start of new season and had a rush on lately, but soooon I will have more.

Scott: When did you personally start eating chillies?

Neil: Oh dear, 25 years ago. But for about 22 years I only ate Asian Birds Eyes and Tabascos, so it wasn’t super-hot, and I didn’t get into those super-hot ones ’till the chilli tests started.

Scott: What is your personal favorite product/sauce you produce?

Neil: The new upcoming SKOBIYAN sauce, made from Nashi Pears and Trinidad Scorpions. It’s the only sauce I have that I use just drops of it, and 6 drops of it does me on dinner. It has unbelievable heat for such a little amount.

Scott: What’s your favorite sauce or spicy product made by someone else?

That’s hard as there are a few and have different favorites for different foods:

And for meats when not using my NagSav, it’s a toss up between Ol Man Stillmanz’ (Oz) Naga Fatali Jerk Paste and Alphnerdz’ (Oz) Pain 2.

Scott: A lot of people may know you best from your YouTube videos where you test out different hot sauces and chilli peppers. Do you think that’s helped given a lot of exposure to THSC?

Neil: Definitely, before that I basically sold nothing or knew no one. YouTube, even though a lot of people think it’s rubbish, is the best thing for you can do for advertising – it’s 24/7, worldwide and free, and a website where people can get stuff from can’t be beat unless you pay squillions of dollars.

Scott: Do you get a lot of requests from people to try their sauce?

Neil: Quite a few and it’s growing as I go along. I only started to test sauces ’cause ran out of chilli pods to test due to it being winter in Australia and I was asked “hey, why don’t you test my sauce?” I didn’t think was a great idea so I thought I’d be different and got a huge spoon [to pour sauces on]. That’s sort of taken off now and people are still sending sauces even though I’m about to start on pods for six months, but I may have to do mid-week sauce tests depending on how much people send.

Scott: What is the hottest sauce you’ve ever eaten?

Neil: Mad Dog 357 Silver Edition is unbelievably hot and doesn’t taste extract-ish. I wouldn’t recommend doing it – lots of it can be a painful episode!

Scott: What is the hottest chilli you’ve ever eaten?

Neil: Trinidad Scorpion. I tried all the Naga’s and thought they were hot but whilst testing the Scorpion, I thought my tongue was going detach itself and leave my head; it’s probably the hottest thing I’ve had. I actually bought www.trinidadscorpion.com, so when it’s the new Guinness Book of World Records holder and everybody wants it, will be easy to find. 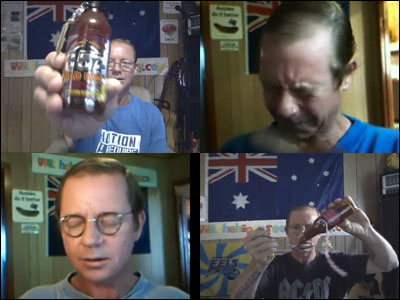 Through the pleasure and the pain: moments captured from the chilli tests and chilli sauce tests.

Scott: They’re doing HPLC testing on the Scorpion at the Chile Pepper Institute in New Mexico, so we’ll soon find out if it’s the hottest.

What is the longest it’s taken for you to “recover” after eating something extremely hot?

Neil: After trying most of the extract sauces, I’ve been not well for hours as they stick and don’t go away. It’s really terrible ’till next day when they’re out of the system. So it takes about 12 hours and then I still feel not up to 100% ’till next afternoon.

Scott: What’s the average heat level you like to consume with your everyday meals?

Neil: Oh dear, I have an addiction to heat and love things hot as possible. So probably I’ll have a Naga, 7 Pod or a Scorpion with dinner. No one else here likes it so hot, so I have to cut up fresh or powdered chillies and put it on just before eating. Other meals are the same, I just don’t use as much but I have to have the heat cranked! I have to take chilli powders when I go out to eat as I can’t eat food unless its HOT!

Scott: What are peoples’ attitudes towards eating chillis and spicy food in Australia? Do most people generally eat “bland” cuisine? Are various world cuisines that are known to use a lot of chilli peppers – Thai, Indian, etc. – popular Down Under?

Neil: I was chatting ’bout that the other day. 10 or 20 years ago there wasn’t even Rocket Lettuce [also known as Arugula] around and “spicy” was the local Thai or Indian restaurant and they weren’t even hot even unless asked. Now it’s exploded and everything has “Hot” somewhere. But Thai and Indian are still going great, plus with our Multiculturalism there are now a heap more options.

Scott: Where do you get your news and information on the chilli pepper and fiery foods industries?

Neil: Actually I don’t look round for stuff or at what others are doing due to being flat out doing my own stuff, only a member of two forums and don’t post much, mainly showing YouTube tests. Most of what I get are from e-mails from people telling me what they have or asking questions, so I wouldn’t have a clue whats going on and make shit up as go along usually.

Scott: Are there any products coming out soon in the the next year from THSC?

Neil: I have two new sauces that I just need pods for, then have a sauce planned, so a total of three new sauces, my new Naga-Infused Peppercorns, 40 new varieties or so plus I will have dried, powdered and flaked naga products as well as Scorpion, and a few t-shirts.

Scott: Where do you see yourself and THSC in five years? 10 years?

Neil: Just rented an office/yard, so I’ll be here for a few years and building slowly. getting a few acres is the next step so that’s the 5 year plan, then I will build on the property a chilli museum sort of thing with heaps of varieties with a coffee shop so people can come grab a coffee have a wander / look around and then a shop to buy products from as well. That’s if I don’t kill myself doing something stupid in the meantime.

Scott: What are some of your hobbies when you’re not eating spicy foods?

Neil: Playing music or listening too, and hanging out with my boys. They’re ages 5 and nearly 2, and they both love gardening and playing with plants. I also like golf and I’m trying to get back into surfing as I lost the Arthritis that stopped me doing it. I would love to do some camping but can’t be away from garden plants for extended periods.

Scott: On your newer videos your amplifier and (usually) a guitar is visible. Give us a plug for your band.

Neil: Cool. I’ve been playing now for over 20 years both in various bands and solo – as I love that – and have a new band called Mad Clown Disease. We were originally a punk band, dressed as clowns and trashed ’80s songs plus punked up a few originals, but we’ve mellowed out and we play acoustic now which is easier to get gigs. (laughs) Mad Clown Disease’s YouTube channel is “madclowndiseaseoz“. We have a few vids of rehearsals and playing live up there.

Scott:For the musicians (like me; I play guitar) who might be reading this interview, what kind of stuff do you play? What gear do you use?

Neil: Now acoustic a lot of our originals plus cruisy covers interpreted our way and a lot kept the same. The artists we cover range from Iron Maiden to Chris Isaak.

I love my Garrison Acoustic. When not playing acoustic material, I have an Ibanez electric guitar which I use that’s modified. I use a BAEZ prototype 100W head, a Quad box most often though we play through a Yamaha 600W PA or the 200W Phonic Power Pod that’s in the YouTube videos. When we rehearse here or play solo, I run a PA hire company part time so we have lots of equipment.

Scott: When are the “Back of Ma Throat” t-shirts coming out?;-)

Neil: Made one the other day, as I had to go to a pie eating competition and thought be good to push The Hippy Seed Company, then I wore it on the weekly YouTube test and and had a huge response so I will look at getting some of those made up soon professionally, along with a couple of others as well.

FireTalkers: Interview with Neil Smith of The Hippy Seed Company