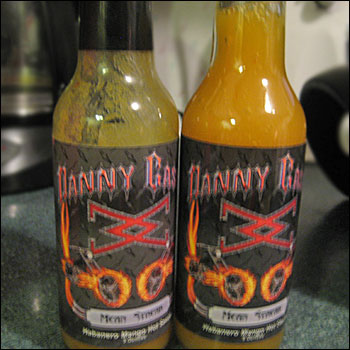 Here’s a quick update to the review of Danny Cash’s Mean Streak Habanero Mango Hot Sauce I wrote just a few weeks ago. Danny had told me that he recently re-formulated the recipes to all of his hot sauces and had sent me a bottle of Mean Streak to try since the re-tweaking. Messing around with a great sauce like Mean Streak is no casual thing. It had better be good.

I opened up the bottle of the new stuff and immediately noticed the different after drawing a whiff. Gone is the strong vinegar aroma and in its place is a much more mellow fruity sensation. I splashed a dash of sauce on my palm to taste it, and the distinction between old and new was confirmed. Mean Streak, as I described it previously, is no longer in “Louisiana hot sauce” territory that is flavored by heavy vinegar and salt. The newer formula is a sweeter blend, with the taste of mangos taking center stage. So much is the dominant fruity flavor that it’s almost like a mango/orange juice fusion accented by fresh habanero peppers.

Mean Streak is a touch smoother, both in physical consistency and in taste. The older version certainly wasn’t tongue-scathingly hot, but because of the newer variation’s reduced vinegar content, the flavor profile I’d have to say is drastically changed with less perceived heat and increased sweetness. You could still probbaly use it for lighter meats like fish and chicken. But Mean Streak in my opinion is now more of a tangy dessert sauce, or an additive for mixed alcoholic beverages that may need a drop or two of liquid heat.

I poured large amounts on a miniature, over-baked pizza to see if old applications still held up. I’m happy to report that the modified Mean Streak still is great on pizza, but it is different since it lacks that sharp bite it once had.

Do I like it? I have to give an unequivocal “yes”. It’s still delicious. But if it holds up as a replacement of one of my “go to” condiments remains to be seen.

Go to http://www.dannycash.com/danny_cash_hot_sauces_mean_streak.htm for more info or to pick up a bottle or two. 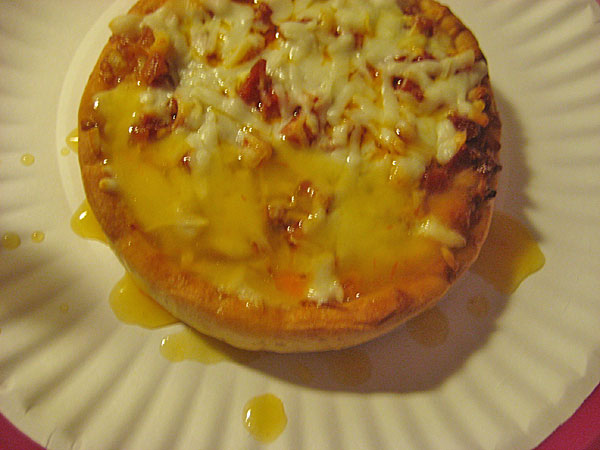