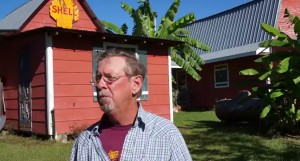 About a month ago, I was given a sneak peek of a trailer for a new documentary on chile peppers by filmmaker Eric Raine. He had traveled to 26 cities in 4 countries to showcase a wide swath of subject matter concerning our favorite capsaicin-filled pods, which included the chile pepper heat horse race, chilehead culture in general, and the phenomenon of hot sauce shows.

Back then,  I gave him feedback, which included my opinion that the trailer focused a bit too much on the drama surrounding the claims of Smokin’ Ed’s Carolina Reaper pepper being the world’d hottest chile. I personally have gotten out of the online (and offline) bickering about what pepper is the hottest. In fact, I think there is very little to no difference between most of these new “hotter” strains, and issued a chile eating challenge to anyone who is able to prove otherwise (and so far no one has been gutsy enough to take up the challenge). But I digress…

The trailer appears to be identical to the one I viewed back in June, with no less chile pepper drama removed or edited based on my suggestions. But that is not exactly indicative of what content is featured in the entirety of the movie documentary as a whole.

Overall I am exited about Eric’s effort, and he has indeed talked to a nice cross section of some of the most well-known folks in the chilehead community, pepper growers and sauce makers.

Without further ado, here is the trailer for “Crazy Hot“:

Below are some of the links of the individuals and companies featured in the “Crazy Hot” trailer: