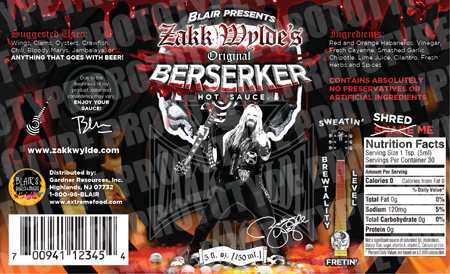 Hot off the press from Blair Lazar:

So many things have been going on in Death Sauce Land over the last few months. So much in fact that I could not explain everything in just one e-Mail. Over the next couple of weeks I will be sending out several additional messages covering many exciting topics.

Today I want to announce that Blair’s and Zakk Wylde have partnered in a unique line of “Berserker Brand” Hot Sauces. As I am sure many of you know Zakk Wylde has been the lead axe man With Ozzy Osbourne for almost 20 years and has an incredible following of millions of fans from around the world. I am very honored to be working with him directly on this project and was psyched to learn he has been a long time Death Sauce fan, not to mention a fellow Jersey boy. We will be launching 4 unique sauces in June 2008. These sauces will be available via www.extremefood.com, www.zakkwylde.com, Ozzfest, as well as many other major retailers around the globe that will be announced soon.

Take a look at the prototype of the label below as well as a message directly from Zakk. Again this is a very exciting event for Blair’s and we look forward to millions of new chiliheads joining us in using and collecting both Zakk’s sauces as well as my reserves. Enjoy the ride!

“When it came time to choose a company to introduce a recipe of flavors geared towards my fan base, the Berserkers, only one company was considered: Blairąs. So I made the call right away.

Blairąs Death Sauce has taken first position in my rack of flavors for sometime, and itąs been my go-to sauce for anything Iąve cooked, grilled or recently killed that needs that extra punch. The thought that I could build on that Blair’s tradition, and bring it to my audience is huge. And it’s getting bigger since we decided one flavor is not enough – so weąre going with 4 flavors to launch.”

Blair and Zakk WyldeTeam Up For Berserker Brand Hot Sauces