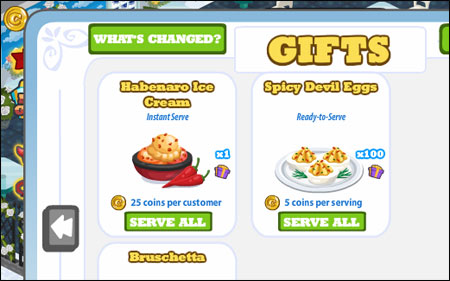 Here’s another instance of fiery foods invading the mainstream. After noticing the Ghost Chili appearing in FarmVille, my wife also caught another spicy entry in another Facebook game. In Cafe World, one of the available gifts is a bowl of Habanero Ice Cream (you can also see Spicy Devil Eggs along side of it). Eagle-eyed chileheads will instantly spot two mistakes in the screen shot to the right: 1) Habanero is spelled “Habenero”, and 2) real-life habanero chiles are rounder and smaller than the longer, pointier peppers depicted here.

One thing I particularly love about this is that it showcases an often underrated usage of chile peppers: their employment in traditionally “sweet” foods. If you don’t know already, I am a HUGE fan of “sweet and heat”.

Both FarmVille and Cafe World are social networking game applications created by emerging software giant Zynga. As I had mentioned in the FarmVille post, there’s a good chance someone working at that company is a huge fan of spicy foods.