It’s back for the fourth year!

Mark your calendars for July 31st and August 1st, and join the manufacturers and diehard chileheads who make the pilgrimage to Jungle Jim’s annual (four years and running) “Weekend of Fire”. The annual hot sauce show event is held inside The Oscar Event Center, located adjacent to the Jungle Jim’s six and a half acre megastore in Fairfield, Ohio, just north of Cincinnati.

This year they are planning something bigger, hotter, and even more fun. Prepare yourself for up to 75 booths of fiery foods of all kinds – hot sauces, barbecue sauces, salsas, marinades, mustards, jerkies, peppers and more from the all ‘cross the USA.

Additional information is forthcoming, so go to the Official Weekend of Fire Website for periodic updates, or stayed tuned to this blog.

For us chileheads, the Weekend of Fire is of course the show started by Bret Vitek in 2007. Bret is well-known in the online chilehead community and while he was the Specialty Foods Manager and Buyer at Jungle Jim’s, he spearheaded and organized a hot sauce show for the midwest (which was considered an odd locale at the time). Bret introduced a bloggers booth in the next year’s show, but before he was able to coordinate a third show, he left Jungle Jim’s to work for CaJohn’s Fiery Foods.

Bret’s tradition continues on with the bloggers booth, where spicy items are sold at reduced price with all proceeds going to charity, plus it’s a cool hangout spot for our close-knit network of bloggers and chileheads who are based primarily in the midwest and eastern U.S..

Pictured below at last year’s booth are (from left to right) myself, Paul “The Big Show” Raczynski (in the orange shirt in back), Buddah, Danny Huddleston and David “Hudd” Huddleston. Booth visitors in 2009 were asked to vote for a winner out of four finalists in our salsa contest. 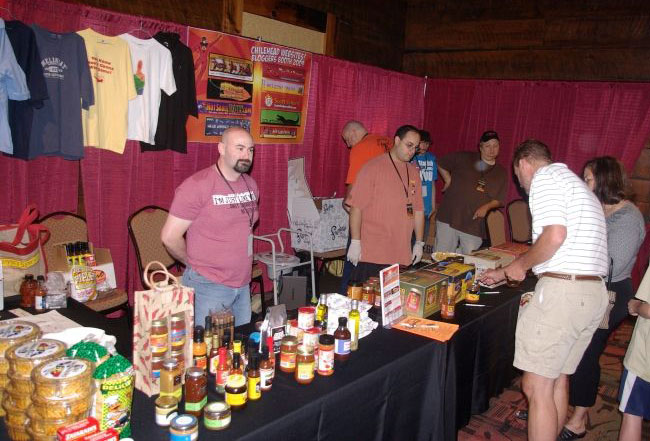