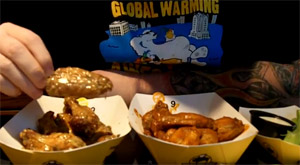 As a chicken wing enthusiast, a participant in a handful of wing challenges, and a spectator of at least a couple of dozen buffalo wing-eating contests, below is perhaps the quickest, cleanest, and most efficient way of eating the “flats” of those scrumptious little fowl appendages.

The first time I came across this technique was when I saw past wing champion Dante of Columbus, Ohio, who is the African American man who has been to probably every North Market Fiery Foods Festival show since it’s inception, and is one of the regular favorites to at least place in the top two contestants in their wing-chomping brawls. Using this method, he was able to suck wings clean in a rapid succession and smoke the other challengers.

Of course, the aim of this video is not necessarily to scarf down as many wings as possible in a given amount of time, but to free up one hand from getting saucy. Super simple this is…enjoy!

I want to personally invite you to join me at this year’s 3RD ANNUAL UCP HEARTLAND WING DING – ST. LOUIS, being held THURSDAY, AUGUST 22, 2013 at Queeny Park in the Greensfelder Complex from 6:00 pm to 9:00 pm.

The UCP Heartland Wing Ding is a “best chicken wing” contest and tasting event all rolled into one. Local restaurants cook and serve wings to the general public and a panel of celebrity judges participates in a blind taste test to choose winner’s in several categories. There’s a People’s Choice award voted on by the crowd, several fun raffles and local band, Willie and the Poor Boys will provide entertainment and music. The event is sponsored by Schlafly, Coca Cola, Fox 2 News, St. Louis Magazine and… 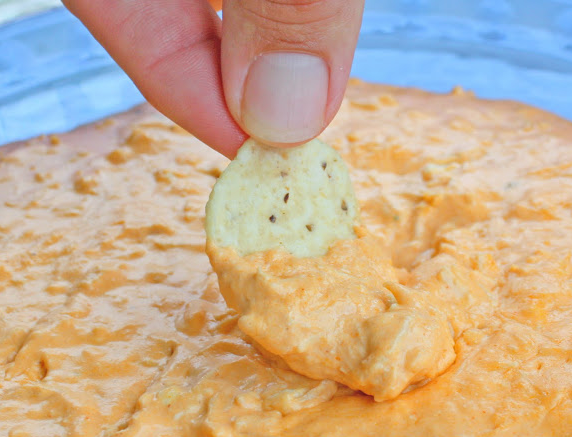 If you’ve never had buffalo chicken dip and crackers, then you don’t know what you’ve been missing. This stuff is frickin’ additive and is guaranteed to be the hit of any party or get-together. Just imagine creamy, spreadable buffalo wings in bitesize form without the mess.

Scott interviews Josh Todd and James Sunderland of the company Hot Saucers, makers of the Pineapple Express sauce. Also, Scott gives you his picks for his favorite hot wing/buffalo wing sauce of all time, in Mild, Medium, Hot and Extreme Heat categories. 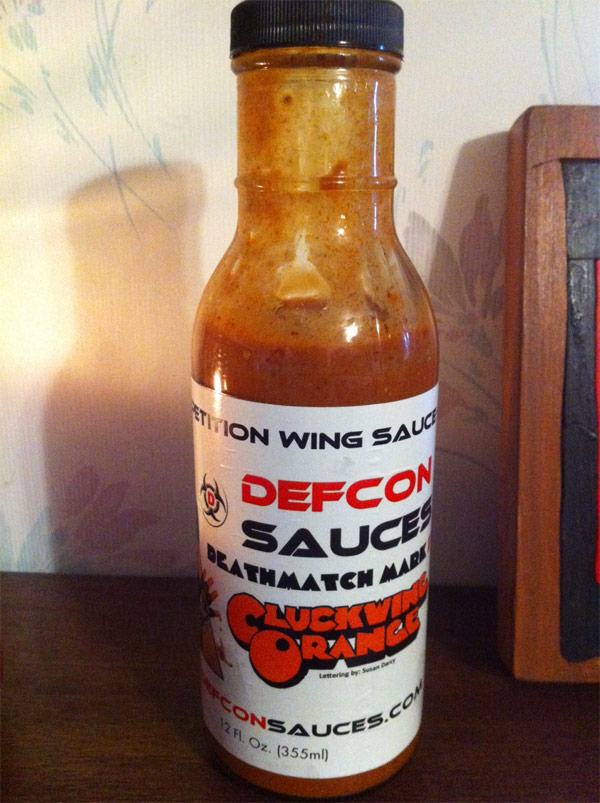 Is there impartiality around the Roberts homestead towards DEFCON sauces? You betcha! We are definitely a “DEFCON house”!

Now, before you rush in to figuratively lynch me and bash the above statement into thinking that I do not take my role as reviewer or critic seriously, I will certainly take a stern critical eye to the things that John and Maggie Dilley (AKA the DEFCON “Creator” and “Createss”) call into being. Their Hobby Horse and Habby Pony Sauces float around the “so-so” level in my preference (simply because I’m not a huge horseradish fan), and their Def-Konichi Asian style tipping sauce (which I believe is now defunct) didn’t exactly pop my taco.

That having been said, I don’t think any soul alive has topped DEFCON for pure wing sauce yumminess (which the exception of Ott’s Buffalo Sauce in the mild category) with the Defense Condition series, which includes Mild (#3), Medium (#2) and Hot (#1) variations. All three are superb, “must-own” products…

I don’t know much about Griffin’s Wing Sauce, other than the fact that it’s owner, Mike Griffin, hails from Levittown, Pennsylvania. He contacted me a few months back and inquired about doing a product review for all 10 of his 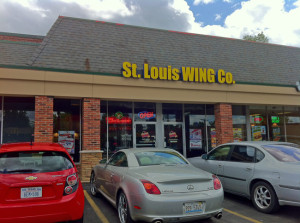 During my first report for the Chevy STL Keys promotion (more about that soon!), I decided to do a formal review on one of the most unique chicken wing eateries I’ve yet to come across, and I’m fortunate enough to have learned that it was located in the St. Louis, Missouri metro area where I call home.

I’m referring to St. Louis Wing Company, the brainchild of Chef Bobby Tessler. Instead of featuring multiple level heat sauces (you’ll find monikers such as no mild, medium, hot, and nuclear) like some wing joints or differently-flavored bottled sauces such as Buffalo Wild Wings, Chef Bobby takes a different approach. He whips up created-fresh-from-scratch sauces, glazes and marinades and will also apply herbs, spices and chopped and minced solid ingredients atop the already “tossed” wing pieces…

Long before ZestFest 2012, there was a bit of conversation about a new wing sauce containing the distinctive flair of honey. This product called Honeyblaze Wing Sauce had received accolades on The Hot Pepper forums, and had been reviewed on

If you want to find out who the King of Wings is in the St. Louis, Missouri metro area, come on down to the UCP Heartland Inaugural Wing Ding!

I’ve been asked to be a judge for this hot event, in which local restaurants duke it out in an all-out contest for the title of the “Best Chicken Wings” in two categories: Best National Chain and Tastiest Wing by a Local Restaurant.

The general public can get all-you-can-eat samples of all the entrants’ wings AND get two free beverages (beer or soda) for only $25 per person. All proceeds… 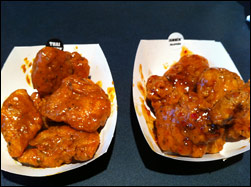 It’s new flavorings time at Buffalo Wild Wings, and when I got word of two new sauces they were offering – Jammin’ Jalapeno and Thai Curry – you had better believe that I wanted to try them. The Jammin’ Jalapeno sounded intriguing, as its marketing description was, “Spicy jalapenos, blended with a touch of tequila and a hint of lime. Sweet heat.” Yet it was B-Dubs’ spin on another Asian flavor that got me walking through their doors. Of course, with most of their new sauces, they come attached with all the standard phraseology to go along with it, e.g., for a limited time only, etc. 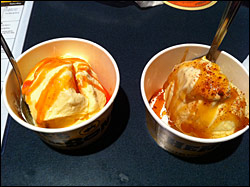 Here’s a complete surprise I stumbled upon during the last family outing at our Fenton, Missouri Buffalo Wild Wings location… spicy ice cream! With my youngest son, Kevin in tow, we knew this was just something we had to try as soon as I spotted it in a special menu insert.

If you can’t find this frozen wonderment at your local B-Dubs, it’s in all likelihood that this is a test program that’s only available in select geographic areas…