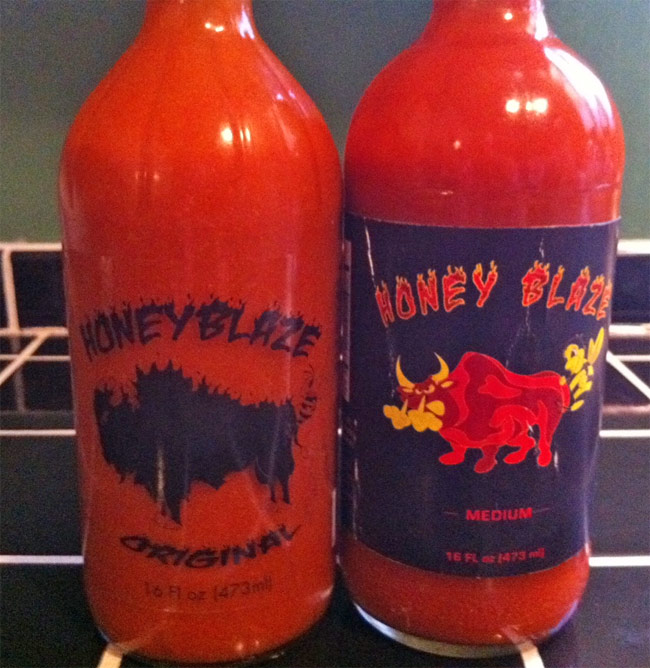 Long before ZestFest 2012, there was a bit of conversation about a new wing sauce containing the distinctive flair of honey. This product called Honeyblaze Wing Sauce had received accolades on The Hot Pepper forums, and had been reviewed on I Love It Spicy.

Now, you know that if you mention anything about wings, I’ll make a mental note about it; and if you start giving phrases to a wing sauce, my attention will grow from being a stat in the backburner of my mind to a heavy salivation and a rumbling in my stomach to try it as soon as possible. Al “Buddah” Goldenberg had then declared Honeyblaze his wing sauce of the year, so it had become even more of desire to grab some of this.

I had met Honeyblaze‘s owner Miller Townsend at ZestFest. Miller provided a couple of small sample bottles that I could take with me on the plane ride back home to St. Louis. I cracked open said bottles, and was immediately met with a heavy and potent honey aroma. Honestly, although I can admire the usage of honey in a product – I love a bulk of the fiery sauces and spreads that Sam and Tina McCanless of Zane & Zack’s World Famous Honey Co. have whipped up – a quick taste lick from the Honeyblaze samplers revealed a tremendous amount of honey. Perhaps too much, so I had developed doubts, as premature as those opinions may have been.

Now I’ve since ordered a pair of normal 16 oz. bottles of both Honeyblaze Original Wing Sauce and Honeyblaze Medium Wing Sauce for review. I should be fair and see how they fare on some actual wings, so read on to find out what I thought.

Aroma:
3 out of 5. You can definitely tell there’s honey in there, but not quite as much as what I detected in the aforementioned sampler bottles. It’s a smooth, sweet odor with not a lot of harsh, overpowering vinegar or cayenne tones.

Appearance and Texture:
3.5 out of 5. Both the Medium and Original versions are reddish-orange sauces with a medium consistency. I like that it’s not too watery and that it has substantial sticking power, adhering to the wing’s surface.

Taste Straight Up:
3.5 out of 5. Vaguely similar to one of Defcon’s Defense Condition wings sauces, as it has a nice creamy-like way that it plays with your tastebuds. Yes, there is honey present in the midst of the base buffalo flavor. Thankfully it didn’t knock me out the way the samplers did. What I detected here was a much more balanced blend of sweetness with the twang of vinegar, the spiciness of cayennes and the richness of the cream. Let’s see how this plays out in a meal.

Taste on Food:
4 out of 5. Grilled wings were on the menu. Whether or not I fry or grill chicken parts, I normally give them a light dusting of salt and black pepper.

I took the seasoned wings and placed them on the grill in between areas of direct and indirect heat with charcoal. Approximately 7-8 minutes of cooking time was given to each side, and then I tossed the half-cooked wings in metal bowls full of Honeyblaze Original and Honeyblaze Medium sauces. The wings were thrown back on the grill to sizzle up an additional 5 minutes in the “medium zone” to allow the sauce to caramelize with getting too scorched.

This sauce was excellent! Sticky and thick, Honeyblaze made for a killer sauce and a flavor that even seasoned wing afficiandos won’t find every day fo the week. With terrific zing and sweetness, the Medium provided just enough heat to please both mild mouths and chileheads. The Original may be a bit too mild, yet the core taste thrills. 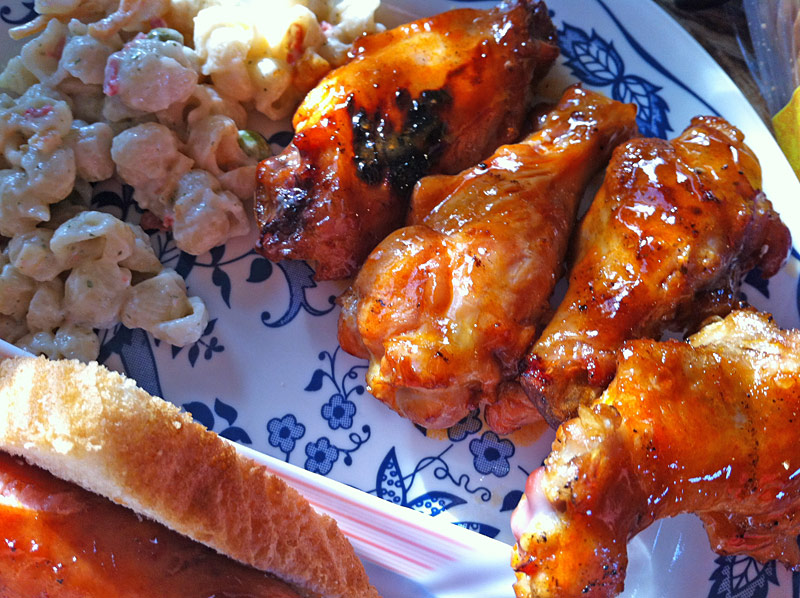 Honeyblaze sells a Hot version if you’re in the market for a sauce that will kick things up a couple of notched in the wildfire department.

Bottles and Label:
2.5 out of 5. In these particular 16 oz. glass bottles, I can see that Honeyblaze have taken a cue from Defcon when it comes to how they present the sauce. the label artwork, on the other hand, could be vastly improved. If I were Miller and Doug, I would work with a graphic designer to create something that would compete with what some of the bigger boys have or else they could be possibly be overlooked if the “honey” in the name “Honeyblaze” doesn’t first catch their interest.

If you only care for wing coaters that are hot and tangy, then Honeyblaze may not be for you. But if you like depth, richness, and some distinctive honey-infused sweetness with your chicken, then you may have have one of your new favorites in this.

Interested in giving this a test drive yourself? Run on over to http://www.honeyblaze.com to order a few bottles.