I’m beginning a series that features most the best chicken wings for sale in the greater St. Louis, Missouri metropolitan area. To kick off the reviews, I’ll focus on one of my personal favorites, Imo’s Pizza’s Hot Wings.

Now some of you may know Imo’s as the preeminent dealer of what is known as St. Louis-style pizza. If you’re unfamiliar with the term, this version of pizza is characterized by a wafer-thin crust that’s similar to a cracker (albeit with a little chewiness), and is topped with a sweet tomato sauce and super-rich Provel processed cheese. I’ve never seen a pizza so polarizing – it even trumps the Chicago vs New York style wars, in my estimation. Either you hate it with all your soul or you crave it night and day – there is no middle. I’m firmly entrenched in the camp that loves St. Louis-style pie.

But that’s a topic for another day. What I’ll put my attention on this time is the highly underrated Imo’s Hot Wings.

Since most of the Imo’s locations around Missouri have little or no inside seating, virtually everyone gets their Imo’s fix via delivery of carry out. I never recall ever having a problem getting pizza and wings delivered from their Fenton location when it comes to order accuracy or speed, and tonight was no exception. I got the goods brought to my door in less than 30 minutes.

The mini tubs of ranch and bleu cheese were wrapped in foil, as were the wings themselves inside the styrofoam box. For those of you old enough to remember McDonald’s McDLT, where hot and cold ingredients were stored in different sections of a box before assembling together, this was similar in that the dressing remained nice and cold and the wings piping hot. 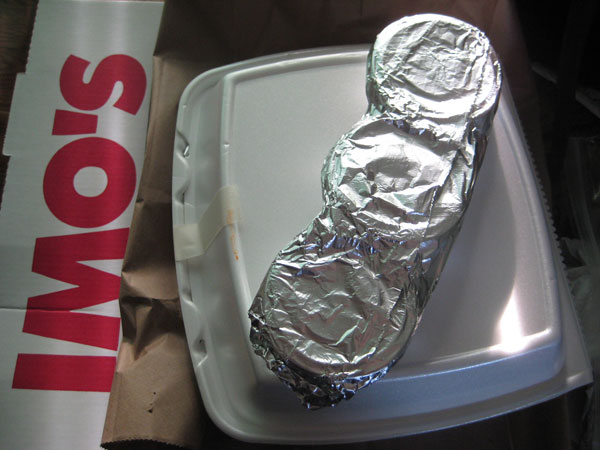 I tore into the aluminum to have the order of 30 wings revealed. All wings had an even distribution of hot sauce covering them; the sauce coating was light but enough not to be considered “dry” wings. Just in case I would have wanted more sauce, that was a shallow pool of a combination of sauce and drippage lining the bottom of the foil. 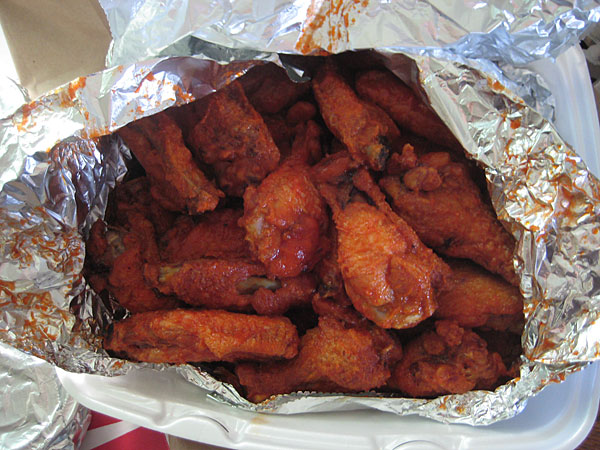 The wing pieces were a pretty large size without having a lot of fat make up a majority of the volume. Don’t you hate it when you see big, juicy wings, only to find out that most of what you sink your teeth into is nasty fat? Thankfully, Imo’s hot wings are wonderfully lean. 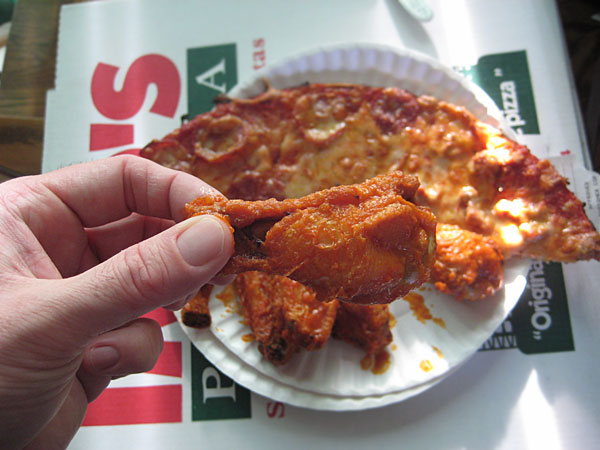 The pieces were good and crispy and lacked any off-putting sliminess that lesser pizza joints and restaurants. The skin (which I admitted don’t like consuming a lot of) had light crunchiness which was really appealing. The sauce is red on color and had just enough spice to make these pleasing to my tongue. The sauce, while very close to other buffalo wing coatings, had more of a sweet and tangy flavor than you’d expect. It’s still great in my book and very additive. Is it hot? Yep, just enough. On my scale of 1 to 5, with 5 being the hottest, Imo’s hot wing sauce is a decent 2.5. It will leave your lips and tongue with a mild numbness. And it’s mighty tasty to boot, as well.

Imo’s Hot Wings have been, from my experience, consistently good. Next time you a few pizzas delivered, give some of these bad boys a try. Prices vary depending on your location, but you can get an order of 12 for around $5.95, or discounted rates for larger orders.

To find a location near you in Missouri or Southern Illinois, visit the Imo’s site at http://www.imospizza.com.

What’s On Tap
In the coming weeks, I’ll tackle many, MANY more wings from around the St. Louis area. Don’t worry; I’ll cover your favorite, so just hang tight.