Warning: Use of undefined constant add_shortcode - assumed 'add_shortcode' (this will throw an Error in a future version of PHP) in /home/scottrob/public_html/wp-content/plugins/stray-quotes/stray_quotes.php on line 615
 The 28th National Fiery Foods and Barbecue Show is Almost Here! – Scott Roberts Hot Sauce, BBQ and Spicy Food Blog 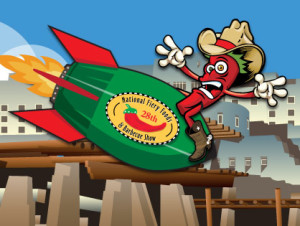 Albuquerque, NM – The 28th annual National Fiery Foods & Barbecue Show is drawing near as hundreds of exhibitors prepare their best gourmet foods, sauces, spices, sweet-heat treats and rubs to showcase at Sandia Resort and Casino March 4-6, 2016 in Albuquerque, New Mexico. The event will feature more than 1,000 different products from the U.S. and around the world.

The Fiery Foods Show is the country’s largest gathering of fiery food products and barbecue sauces. The 2015 event welcomed a record number of attendees and organizers of the event expect even more for the 28th annual event. This year the Fiery Foods Show will host multi-media demonstrations and a margarita challenge for the first time. Its official mascot, Chile the Kid will return, greeting guests throughout the weekend.

Multimedia presentations Saturday and Sunday will include a Tequila Demonstration by mixologist Greg Mays; Kelly Urig on her book, New Mexico Chiles: History, Legend and Lore; Dave DeWitt on his book, The Field Guide to Peppers; and Tim Ziegler on Spices & Chiles in Regional and Ethnic Cuisines.

While many exhibitors will display their award-winning selections, others will showcase first-time products. Attendees can also enjoy select Scovie Award-winning products, recognized as the top fiery food products in the world. The annual competition organized by the producers of the Fiery Foods Show is one of the most competitive blind tasted food competitions in the U.S., and receives hundreds of entries each year.

Tickets are $15 for adults and $5 for youth 18 and younger. Advanced tickets will be available through Ticketmaster for $12, and at the Sandia Resort and Casino box office. Parking is free. For more information visit www.fieryfoodsshow.com.