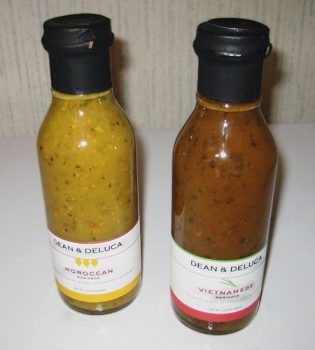 For this two-part review, I’ll take a dip into a couple of Dean & Deluca’s fine marinades – the flavorful Vietnamese Marinade, which contains a mix of chilies, lime juice, mint and cilantro, and the scrumptious-smelling Moroccan Marinade, which has old world spices with lemon zest, ginger, mango and mint….

Aroma:
Vietnamese: Fair, and has the aroma of sweet chiles, garlic, lime, and cherry tomatoes (even though the marinade lacks the later).

Moroccan: Very appealing, sweet scent that strongly resembles a cinnamon roll. Also contains noticeable hints of ginger and lemon. An olfactory delight. If you’re cooking up some meats marinaded with this for company, expect to be bombarded with compliments.

Appearance and Texture:
Both marinades had the same basic look, consistency, and viscosity. The Moroccan, the yellow/tan one, and the Vietnamese, the brown one, were full of beautiful, brightly-colored spices.

Taste Straight Up:
Vietnamese: Delicious flavor! This had a formidable sweetness not really detected in the aroma. Because of this, the Vietnamese marinade is on the verge of almost tasting like a Szechuan-like barbecue sauce, although it’s far more complex and much, much different than BBQ in many ways. Has a mild, chile-infused salad dressing flavor with bits of tang and spice. I noticed the tiniest bits of cilantro flavor, which is probably what gave it it’s tomato-like aroma. This was my favorite out of the two. 3.5 out of 4 stars.

Moroccan: Ironically, tastes little like it’s smell. It wasn’t as sweet as I expected. The high notes of lemon again dominates, even more than it did in the aroma. I also noticed some vinegar in the taste that didn’t come through in the aroma. Very tart and bright. 3 out of 4 stars. 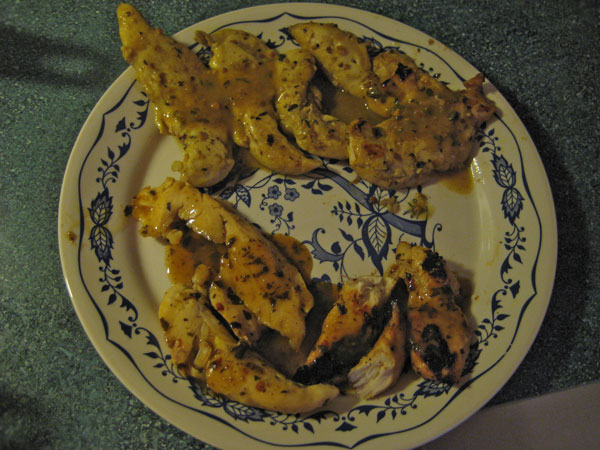 Taste on Food:
I marinaded a dozen chicken breast tenderloins overnight in both sauces. To see how the cooking method effected the taste, I oven-baked half the chicken and grilled the other half. I thought the Vietnamese was slightly better off the grill; I could see myself occasionally replacing the KC Masterpiece come barbecue-friendly weather.

Moroccan’s sourness was about the same grilled or baked. It reminded me of a lemon pepper seasoning with less of the peppery spiciness and more mouth-smackery of fresh ginger.

Heat:
Negligible in both marinades. Since they are bursting with flavor, they are really in no need of extra heat.

Suggested Uses:
I would recommend marinading steaks, ribs, and chicken with the Vietnamese. Items that would go well the Moroccan are chicken, shrimp, and salmon fillets. Both might also be great as a salad dressing.

Overall:
Both are good in their own, unique ways. While the Moroccan was nice, I really have become a fan of the savory Vietnamese Marinade.

You can find these fine marinades at ant Dean & Deluca location (see if there’s one in your area
here). or at the Dean & Deluca website. A bottle runs around $10 each.