Warning: Use of undefined constant add_shortcode - assumed 'add_shortcode' (this will throw an Error in a future version of PHP) in /home/scottrob/public_html/wp-content/plugins/stray-quotes/stray_quotes.php on line 615
 Recipe – Bacon-Wrapped Jalapeńo Poppers – Scott Roberts Hot Sauce, BBQ and Spicy Food Blog 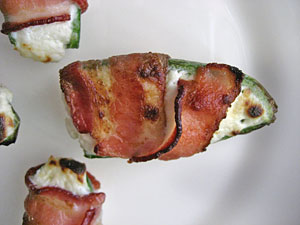 For a delicious appetizer or snack, it’s hard to beat the wide appeal of bacon-wrapped jalapeno poppers. It’s got kick from the jalapenos, crispiness from bacon, and a sweet, creamy, melty fusion of cheddar and cream cheese to balance out the taste.

* 1/2 cup shredded cheddar cheese (you can substitute any comparable types of cheese, such as shredded monterey-jack or a “Mexican” blend)

First, preheat oven to 450°F. Second, using a large spoon, blend the cream cheese and cheddar cheese together in a mixing bowl. Next, wash the jalapeno peppers, split them in half longways, and scoop out the seeds and veins. Then, stuff each pepper half with the cheese mixture using a teaspoon or butter knife (experiment to see what works best for you). Cut bacon in half and wrap 1/2 slice around each pepper half; stick a toothpick through to hold the bacon in place. Place on baking sheets and place in oven for 10 minutes or until bacon is fully cooked.

Alternate Grilling Method:
Lay the peppers on a preheated grill and cook for about 3 minutes on medium heat on one side. Carefully turn the peppers over (you don’t want the cheese to ooze out) and grill the other side for another 2-3 minutes till the bacon is crispy and cooked, and the cheese is melted.