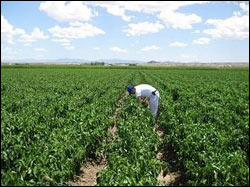 Better news than from nearly one year ago, when New Mexico’s chile yield was down due to disease:

Chile peppers are a hot, spicy subject among growers and researchers in the Southwest and West.

A myriad of possible solutions to reclaim the U.S. chile pepper advantage include improved pest-disease management and breeding. Rebuilding the green chile market depends heavily on the development of a mechanical harvester and destemmer to reduce labor costs. Red chiles are already machine harvested.

“Root-knot nematode management is about knocking down the field population to the point where the grower can live with the damage,” Thomas said. “Once root knot nematodes are in the field, they never can be totally removed.”

Thomas offers three recommendations in root-knot nematode management: determine the nematode density in the field in the fall prior to the next spring’s chile planting; identify which nematode specie or species are present; and evaluate weed pressure.

“Go into the field with a shovel and dig up soil and plants in different areas,” Thomas said. “Look for good gall systems in the plant roots of the crop currently in the ground. Then determine the nematode severity. Use a GPS unit to track the nematode hot spots. This makes it easier to determine from year to year where the nematodes are located.”

Thomas suggests sending soil and plant samples to a laboratory to identify the nematode specie. Not all labs provide this service. If the lab results do not match what the grower finds then re-sample and send to the lab.

Nutsedge weeds can create problems in fields where fumigation is utilized for southern root-knot nematode control.

“Fumigants are not effective against nematodes inside nutsedge tubers,” Thomas said. He suggests a three-year rotation of a non-dormant alfalfa variety resistant to the southern root-knot nematode to reduce pest numbers.

From an agronomic perspective, Jeff Silvertooth, professor and head of the Soil, Water, and Environmental Science Department at the University of Arizona, says red chile requires about 3,200 heat units from planting to harvest. The maximum nutrient uptake levels in New Mexico-type chiles include about 180 pounds of nitrogen/acre; about 18 pounds of phosphorus/acre; and potassium in the 250 pound/acre range.

Chiles require 20 to 29 inches of water per season, Silvertooth says, with a peak consumptive use of one-third inch per day. Peak plant water demand occurs from first bloom to the early green stage.

Natalie Goldberg, NMSU plant disease specialist, calls the 2009 chile crop the best crop in her 16 years in the industry.

“It’s been a good year for peppers; the best harvest I’m hearing,” Goldberg said. “The reason is 100 percent environmental.” Less rainfall this year resulted in less disease and higher-quality peppers.

New Mexico chile pepper grower James Johnson is pleased with his 2009 chile pepper crop. “My crop looks excellent,” said Johnson of W.R. Johnson and Sons Farm near Columbus. “We just harvested the jalapeños and (the yield) exceeded what we were expecting. We’re just starting with the red chile harvest; it looks like the yields will be very good.”

Johnson predicts 3,600 to 4,000 pounds of dried red chile per acre, 10 percent to 15 percent higher than average. Johnson grows 500 acres of red chiles and about 100 acres of jalapeños.

“Normally we have 100-degree weather in June, but it occurred in July instead,” Johnson said. “With the lack of rain we didn’t have phytophthora root rot and leaf spot. Reduced rainfall and delayed heat helped make my good crop.”

Johnson sprayed for a late-season flare-up of pepper weevil. Damage was minimal.

2009 could be a profitable year for Johnson. “I hope so. I’m trying to convince my banker that it will be profitable,” Johnson said. “Everybody is aware of how difficult it may be to borrow money next year. We need a profitable crop to go into our rotations. We really need a good chile year.”

NMSU has conducted green chile mechanical harvesting trials with a handful of machines. The harvester providing the least pod damage and trash is an Italian-made machine.

NMSU’s Manufacturing Technology and Engineering Center (M-TEC) is developing a mechanized destemmer that reduces pod damage. M-TEC’s Dale Cillissen says a “smart machine” destemmer holds the most promise. Cillissen showed an advanced “water-knife” machine that slices off the pod cap with minimal damage. The machine uses 5,700 to 6,000 gallons of water per day, all recycled.

The chile industry will decide on the best harvester and destemmer to bring to market. These systems hopefully will allow chile growers to plant more green chile and open the door to competition against imports. Major chile importers include China, Peru and Mexico.

Chile breeding is also a critical piece of the puzzle. NMSU breeder Stephanie Walker and others are developing chiles that better withstand the mechanical harvester and destemming processes with minimal pod damage and product loss.

Jaye Hawkins, administrator, New Mexico Chile Association, Las Cruces, New Mexico, added, “We’re closer than ever to having a solution to mechanical harvesting and de-stemming. We want to bring the New Mexico area chile acreage back to the 1990 production level.”

Hawkins said, “We want to compete with our overseas competition and again be the top dog in the chile pepper industry,” Hawkins said.

According to the National Agricultural Statistics Service, New Mexico is the nation’s top tamale in chile pepper production with 12,300 planted acres in 2008 grown mostly in the state’s southwestern quadrant.