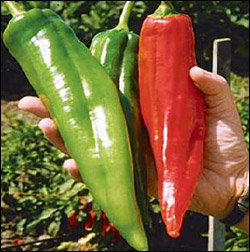 Compiled by Eric Vinje of Cosmic Chile and Scott Roberts

• Two of the founding fathers of our country, George Washington and Thomas Jefferson, are both known to have grown chiles.

• The shorter the molecular chain, the hotter the pepper.

• “Chili” and “chile” are different spellings of the pungent fruit of the capsicum, also called chilli (in the UK, Australia and New Zealand), chile pepper or chili pepper. But in the U.S., the spelling “chili” is a shortening of chili con carne, a ground beef stew that incorporates chile powder or chile peppers. And Chile, capitalized, is a country in South America.

• The heat from a chile pepper is concentrated in the interior veins or ribs near the seed heart, not in the seeds as is commonly believed (the seeds taste extra hot because they are in close contact with the hot veins).

• Chiles can make foods safer – they are known to reduce harmful bacteria on foods.

• The burning sensation that makes chile peppers so appealing to culinary thrill-seekers comes from capsaicin or more accurately a collection of compounds called capsaicinoids.

• More than 140 varieties of chile peppers are grown in Mexico alone.

• 1 out of every 4 people on the planet eat chiles every day.

• Too much heat? Do not drink water – capsaicin which is an oil, will not mix with water but instead, will distribute to more parts of the mouth. The same goes for beer.

• Want to help put out the burn caused by chile peppers and hot sauce? Try dairy products, especially milk. Why is this? Because of the protein called casein, which are commonly found in mammalian milk, breaks down the capsaicin molecules.

• Capsaicin has been associated with many cures that include lowering blood pressure, reducing cholesterol and warding off strokes and heart attacks, speeding up metabolism, treating colds and fevers, preventing cancer and pain control.

• Hatch chiles, named for the town in New Mexico where the annual chile pepper festival is held, are grown all around the southwest United States.

• Capsaicin is a flavorless, odorless chemical concentrated in the veins of chiles and peppers.

• When spicy foods are consumed, the common reaction of the body is to sweat, particularly on the forehead. The technical term for this is gustatory perspiration. 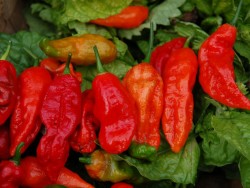 • Capsaicinoids irritate the trigeminal nerve cells (the pain receptors in the mouth, nose and stomach), releasing the chemical messenger “Substance P.” This causes the brain to produce endorphins, the morphine-like natural painkillers that give the body a sense of well-being. The “runners’ high” is caused by these same endorphins.

• Eating large amounts of chiles or extremely pungent hot sauces will give you this endorphin rush, which is an incredible, perfectly safe and natural “high”.

• The official state vegetables of New Mexico are the chile and frijoles (pinto beans).

• Chiles help you lose weight by increasing your metabolism.

• Chiles make it easier to stick to a healthy diet because the food has more flavor.

• Chiles can have an aphrodisiac-like effect on people.

• One teaspoon of hot sauce may provide 100% RDA for Vitamin A.

• Chiles are the second most common spices in the world, following salt.

• If, when a chile pepper is cut open, the veins have a yellowish orange color in that area, it usually indicates the pepper will be a potent one.

• New Mexicans consume more chile peppers per capita than any other group in the United States.

• The chili pepper was first cultivated by the people of Central and South America around 3000 BC.

• The Mayans rubbed hot peppers on their gums to stop toothaches.

• For hotness, size matters. In general, the smaller the pepper, the hotter it will be. All the world’s most potent peppers are under three inches long.

• Chile peppers are cholesterol free, low in sodium and calories, rich in Vitamins A and C, and a good source of folic acid, potassium and Vitamin E.

• The scientific journal Toxicon reported that drinking a quart and a half of Louisiana-style hot sauce will cause death by respiratory failure if your body weight is 140 pounds or less.

• Chiles are fruits, not vegetables.

• People who eat chiles on a regular basis are generally healthier.

• The first European to “discover” chile peppers was Christopher Columbus in America in 1493. Within a century, chile peppers’ popularity had spread worldwide.

• The Incas believed that eyesight was improved by eating chiles.

• In Mexico, a soup laden with chiles is a typical hangover cure.

• Chiles curb your appetite – especially for fatty foods and sweets.

• The hottest chile pepper on earth is Smokin’ Ed’s Carolina Reaper, grown by The PuckerButt Pepper Company (USA), which rates at an average of 1,569,300 Scoville Heat Units (SHU), and has reached as high as 2.2 million SHU.

• Bell peppers are considered to be chile peppers, even though they tend to have a larger size and more sweetness than most smaller, hotter chiles.

• At New Mexico State University, there is a large horticultural organization called the Chile Pepper Institute that is devoted to education and research of chiles.